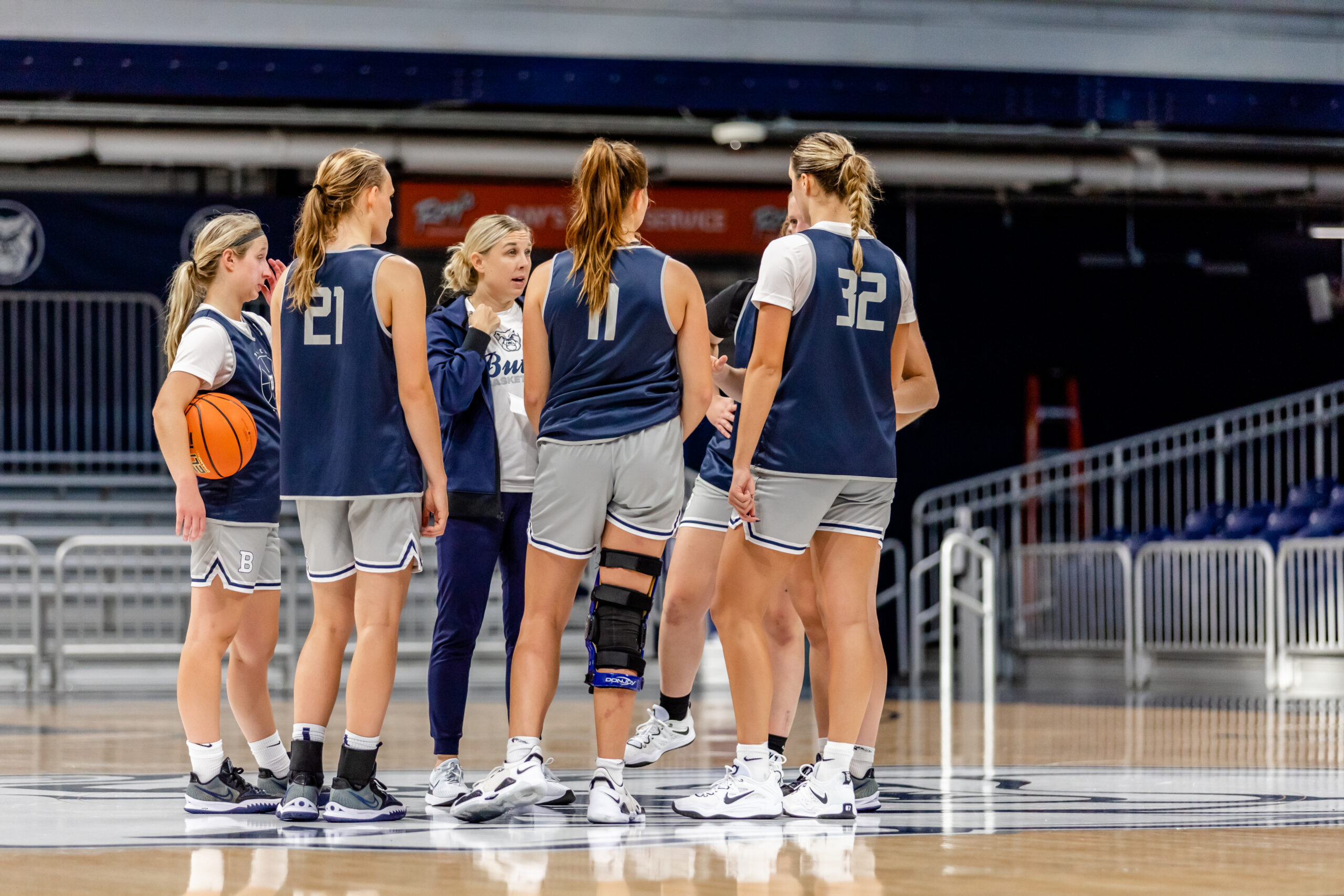 The Butler women’s basketball team huddles up during practice on Oct. 6. Photo by Lauren Hough.

After an offseason full of changes and new faces in new places, it is time to look ahead to the 2022-23 Big East women’s basketball season.

Georgetown had a disappointing season in 2021-22, finishing ninth in the Big East with a 4-15 record. The Hoyas lost Bolden-Morris, their leading scorer, but will look to find contributions from new first-years who have been brought in.

Xavier comes into the 2022-23 season with new hopes after a disappointing 2021-22 season. The Musketeers brought in four first years. They are looking to improve on their 10th place finish in 2021.

Providence returns mostly the same team as last year — a season in which they finished 6-14 in Big East play. Head coach Jim Crowley will look to utilize the team’s familiarity to improve on that record in 2022.

St. John’s returned a lot of players from last year’s team. Four of the top five scorers from last year’s roster return for the 2022-23 season and will look to build continuity with the rest of the roster. In addition, the Red Storm were active in the transfer portal, securing three transfers from other programs. St. John’s will look to improve on their seventh place finish.

Marquette had a successful 2021-22 season, finishing 13-7 in Big East play and 23-11 overall. The Golden Eagles lost their two leading scorers, Van Leunen and McLaughlin, so it will be interesting to see if they can replicate the scoring with the first-years that head coach Megan Duffy brought in.

The Pirates improved their roster during the offseason, retaining two of their top three scorers including All-Big East first team selection Lauren Park-Lane. In addition to bringing back their leading scorer, Seton Hall was active in the transfer portal, bringing in six transfers. The Pirates will look to climb to the top of the Big East.

The Bulldogs are coming off of a disappointing season in which they only won one game. The result of last season sparked Butler to make a coaching change, parting ways with Kurt Godlevske and bringing in Austin Parkinson to coach. It will be interesting to see how the new-look Bulldogs gel and play on the court.

The Blue Demons lost a lot of production from last season, as three of their top four scorers left the program. They were able to retain one of the most productive players in the Big East in Aneesah Morrow, who averaged 21.9 points and 13.8 rebounds per game. With the new additions and returning players, head coach Doug Bruno looks to match their fourth place finish from a season ago.

Creighton finished the 2021-22 campaign third in the Big East standings with a 15-5 conference record. The Blue Jays will return mostly the same lineup and will look to continue the success they found last season.

For the second straight season, UConn finished on top of the Big East, going 16-1 to secure their spot in the NCAA Tournament. They built off this success by advancing all the way to the National Championship game, where they lost to South Carolina 64-49. Geno Auriemma will have to somehow replace the production of star guard Paige Bueckers, who will miss the entire 2022-23 season due to a torn ACL. Bueckers led the Huskies in scoring last year. Despite this, with a mix of youth, veteran and transfer players, the Huskies should be right back in the thick of the Big East race.

The Wildcats are in line for a big season. After winning Big East player of the year, Maddy Siegrist is back for her senior season. Villanova will be looking to their returning sophomores and four first years to help the team stay on top. With the reigning coach of the year in Denise Dillon, the Big East title is up for grabs for the Wildcats.