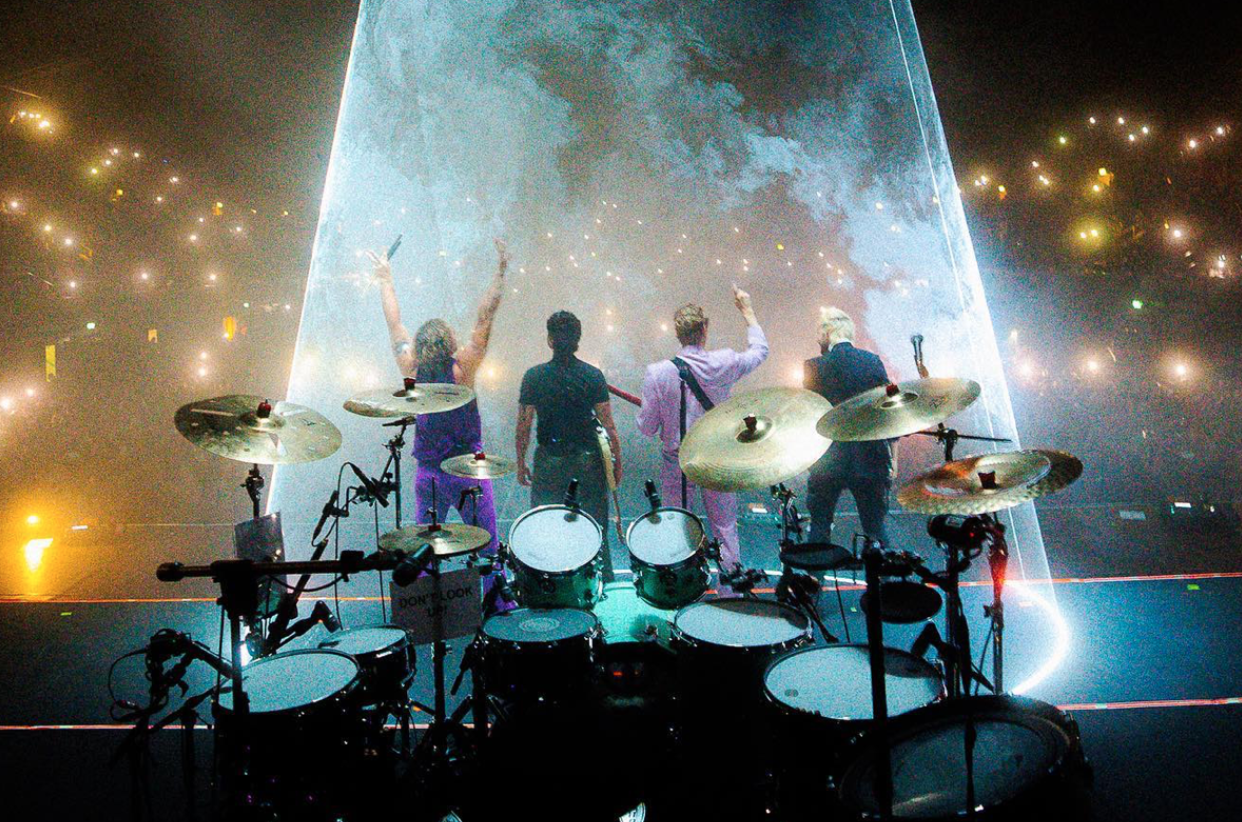 5 Seconds of Summer takes the stage for their Take My Hand World Tour, promoting the release of their fifth studio album. Photo courtesy of Ryan Fleming.

Australian band 5 Seconds of Summer takes listeners on a journey through their 10 years of rising to the challenges of the mainstream music industry on their fifth studio album, “5SOS5.” Released Sept. 25, the 19-track full LP featured both acclaimed singles and highly anticipated deep cuts. Following an international tour with over 50 dates, the band has returned to their roots with a project of introspective pop rock and gratitude for a brighter tomorrow.

Formed in 2011, 5 Seconds of Summer was born of a burgeoning breakthrough for music — the internet. From YouTube covers to record deals and opening for One Direction, what used to be a group of teenagers rocking out in a garage became an international sensation. Breaking expectations set for boy bands with inventive live arrangements and punk rock aspirations, the group has achieved success through a journey of evolution and longevity.

Gretchen Erdmann, senior P2 pharmacy major, recalls the band’s popularity during her middle school years as a jumping point for growth over the last decade.

“I heard ‘Heartbreak Girl’ on the radio [in 2015] because it was everywhere,” Erdmann said. “Then I went out and bought their CD, then I bought a poster and then another CD. Observing them now, I think it’s a huge accomplishment that they’re still together after 10 years, and they’ve made it that long because they’ve allowed each other the space to grow and always supported each other. They’re artists who want to try new things, but they always come back together.”

“5SOS5” was conceptualized and created in a desert cabin in Joshua Tree, according to the band themselves. The isolation induced by the COVID-19 pandemic encouraged the band to look inward and reflect upon their core goals and sound, which led to a project mainly written and produced by the four members, with a few longtime collaborators during the mastering process.

Five promotional singles preceded the album’s release: “COMPLETE MESS” and “Take My Hand” in the spring of 2022, “Me, Myself and I” and “BLENDER” during the summer of their most recent tour and “Older” released spontaneously before the record, featuring 5SOS lead vocalist Luke Hemmings’ fianceé Sierra Deaton in a romantic piano duet. Each single presented a different insight to the sonic narrative of the album, mixing acoustic pop with soaring guitars and retro basslines to support the earworm lyricism of a mature pop hook melody. Listeners introduced to the band just now in their ten-year tenure need not look far to observe the versatility and flexibility of the group.

“I feel like [this album] really showcases their growth,” Jasnic said. “Especially with them being so young and impressionable when they first came into this industry, just taking everything in stride, all of their [genres and sounds] have played a super important [role] in their development as a band. Being together for 10 years is a long time for people to be together and collaborate, but I’m personally a big fan of any [type of music] that they put out.”

The album itself is a sprawling atmosphere of glowing instrumentals and vulnerable lyrics, both unlike anything else in the band’s discography but still distinctive and resonant. The skills of bassist Calum Hood and drummer Ashton Irwin are undeniable, while guitarist and co-producer Michael Clifford and lead vocalist Luke Hemmings steer the melodic mix of ballads and upbeat hits.

The band’s ability to incorporate their love of live instrumentation into the packaging of a main pop hit has been honed over the years, most prevalent in the success of their previous pop singles such as “Youngblood” in 2018 and “Easier” in 2019. Whereas managerial pressures and desire for commercial success dominated the creation and promotion of some of their past works, 5 Seconds of Summer sought out to create a record made by themselves, for themselves, with “5SOS5.”

Macy Cansdale, a junior youth and community development major, takes note of the band’s authenticity as they grow into their musical style.

“I remember [5SOS discussing that their] first album maybe wasn’t as authentic because they were just trying to get out there into the world [by making] what they thought people would like,” Cansdale said. “I like how each album [of theirs] has been a little bit more of their actual interests and not just making music for people to like them. They’re making music they like, and then the right people will find that.”

“Bad Omens” is one standout album track to receive the single treatment with a late night performance and short film music video — the latter of which was created by an all Ukrainian crew in the first international commercial shoot completed in the country since the beginning of the Ukrainian war this year. Other fan favorites such as “You Don’t Go To Parties” and “Caramel” have been soaring in streaming popularity. Fans of the album have been discussing and promoting their favorite tracks, and join together to celebrate solos from their favorite band members on the record.

Erdmann resonates with the sentimental lyrics on the record as a method of platforming vulnerability as an example for artists and fans alike.

“‘Emotions’ is talking about how you [might be] feeling broken right now, like really going through it, but it still emphasizes that you can [feel] your emotions,” Erdmann said. “I think that’s really important, especially nowadays, for an all-male band to be singing about [their] emotions so openly. I think that’s amazing [and the band has done a good job of promoting] being who you are as a person and supporting their fans in whatever ways they can.”

Lyrics throughout the album feature themes of growth and introspection after ten years of rockstar lifestyles and life in the public eye from the band’s teenage years. “TEARS!” details the highs and lows of substance use to dull emotions, while “Red Line” and “Easy For You To Say” tell the story of loneliness and heartbreak while living on the road and dealing with external pressures. On a lighter note, love songs, such as “HAZE” and “Caramel,” pair with bangers about friendship and gratitude, like “Best Friends,” to complete the narrative canvas of the project and display the band’s range in experience and lyrical prowess.

Cansdale’s standout tracks combine her musical taste and sentimental memories of live performances from the band.

“My favorite so far is definitely ‘You Don’t Go To Parties’ because I’m more into the upbeat, fun tracks,” Cansdale said. “They played that one live [for most of their recent tour] and obviously that was before it was released but everyone knew the words. Everyone was sort of getting into it, so that was a nice teaser for [the album.]”

5 Seconds of Summer also hosted an exclusive one-night only performance at Royal Albert Hall in London the day before the album release, titled “The Feeling of Falling Upwards.” Featuring the House Gospel Choir and 12-piece orchestra, the band brought old and new tracks to life with sweeping acoustics and glowing lights inside a venue they previously busked outside of in the early stages of their career. This concert — offered both in person and via digital livestream worldwide — signified how far the group has come thus far while demonstrating how far they still have to travel together, exploring musical boundaries and personal bonds. As best friends and brothers, 5SOS reminds listeners of the validity of their own personal journeys by sharing the story of their own with fearlessness and masterful craft.

“5SOS5” is available to stream on major streaming platforms, as well as available for CD and vinyl purchase wherever music is sold.