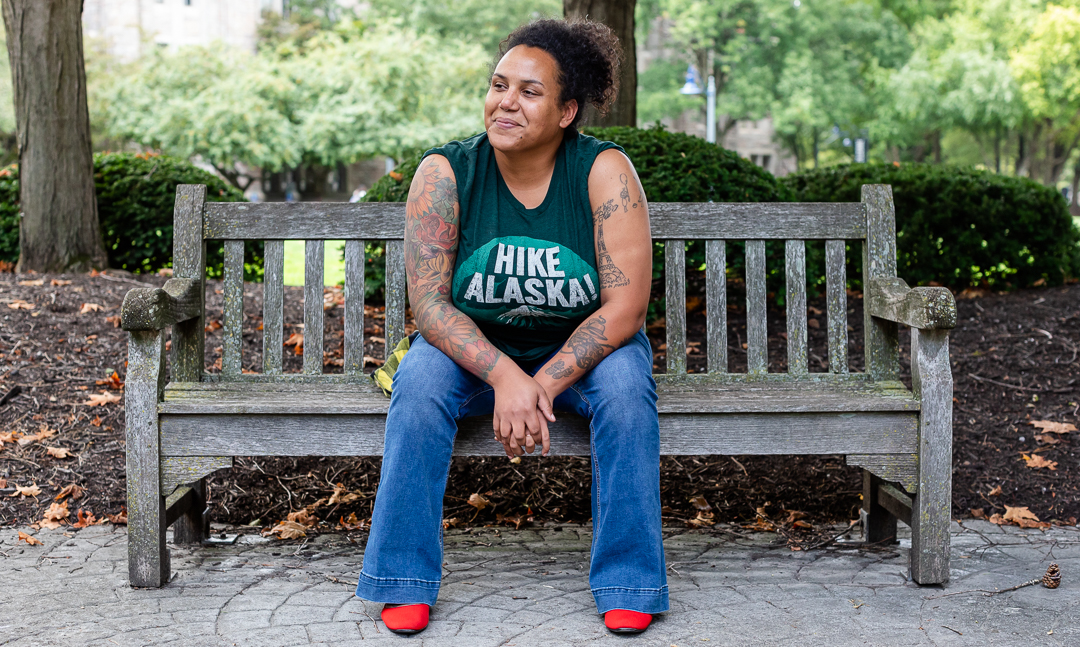 Dr. VanHester’s tattoos are like a diary of their life. Photos by Lauren Hough

“Tattoo Tales” is a series in which The Butler Collegian speaks with a Butler community member about their tattoos and the stories behind them.

Dr. Teigha VanHester, a professor of race, gender and sexuality studies, has an array of tattoos from different milestones in their life. Each tattoo was done by the same friend of theirs. While not all of their tattoos have a strong meaning, the images on their body all remind them of specific moments in their life.

THE BUTLER COLLEGIAN: Can you talk about your inspiration for wanting to get tattoos in the first place?

TEIGHA VANHESTER: Well, I’m American Samoan, so it’s part of our culture. I, in college, was quite rambunctious and into a lot of extracurricular, subculture activities, and so all my friends had tattoos, and so I decided to try it out.

TBC: Would you say the people in your life were generally supportive of you wanting to get tattoos?

TV: No. This was like 2010, so it wasn’t as culturally okay as it is now. I remember I was a waitress at Red Robin, and I always had to wear long sleeves because you can’t show tattoos. It was a whole to-do, so my mom and family were all really concerned like, “How are you gonna get a job?” It was nonsense. But then when they saw them; they were like “Oh, so beautiful.” And the times have changed.

TV: Yeah. A full sleeve of flowers. I have the world map across my back. This arm is kind of like my “ode” to drug days, and a tattoo that I have with my best friend. [On my] right leg is a quote from “Boondock Saints” and Hello Kitty. The left leg is Ruth Bader Ginsburg, Beyoncé and Frida Kahlo, and then me as a Sasquatch pinup.

TBC: Would you say that when you go to get a tattoo, it has to have a special meaning?

TV: No. They had meaning at the time, or they’re memories that were significant to me at the time. But all my tattoos have been done by the same person. We’re in a monogamous relationship. We have a lot of fun and chat, and he does really great work. He’s a good friend.

TBC: What was your first tattoo that you got?

TV: My first tattoo is on my left shoulder. It’s a scene from a YouTube viral video — before YouTube viral videos — called Rejected by Don Hertzfeldt. It was for the Learning Channel. It’s the funniest nonsense. It’s a banana with eyes, and then there’s a little stick figure with a spoon, and there’s a bowl in the middle, and the spoon is super huge. The guy with the spoon just keeps saying, “My spoon is too big.”

My mom’s best friend when she was in high school … I ended up being best friends with her son. He committed suicide, and we watched that together all the time when we’d smoke weed and do bad kid stuff. It’s a memorial for him and some other friends.

TBC: Would you say you have a favorite tattoo?

TV: I’m still working on it. The left upper thigh is the thigh of “nasty women.” So right now it’s Ruth, Frida and Beyoncé; [I need to get] Patrick Kelly added and Audre Lorde, and so it’s just gonna be nice silhouettes of all these lovely queer, mainly Black, revolutionaries that influenced my work in my life.

TBC: What’s your most recent tattoo?

TV: I think it’s the Sasquatch pinup [of me].

TBC: Do you have any current plans for future tattoos?

TV: I do. I just can’t get an appointment. We always go back and forth, but continuing on the thigh. Since I just finished my dissertation on the other calf, I’m gonna get Patrick Kelly so that when I put my legs together, it’s me as a Sasquatch and him. He was a chapter in my dissertation work, and he deserves his own space.

TBC: Is there anything else you want to say about tattoos?

TV: Yeah. A: they hurt. Please stop asking people if they hurt, but it’s not the worst thing. And B: if you say, “Oh I don’t know if I want it forever,” it doesn’t matter. I feel like once you get it, if you think about it a little bit, [and] it’s not like a prison tattoo or racist, you’re gonna love it, and it’s a nice little place marker in life for where you were.