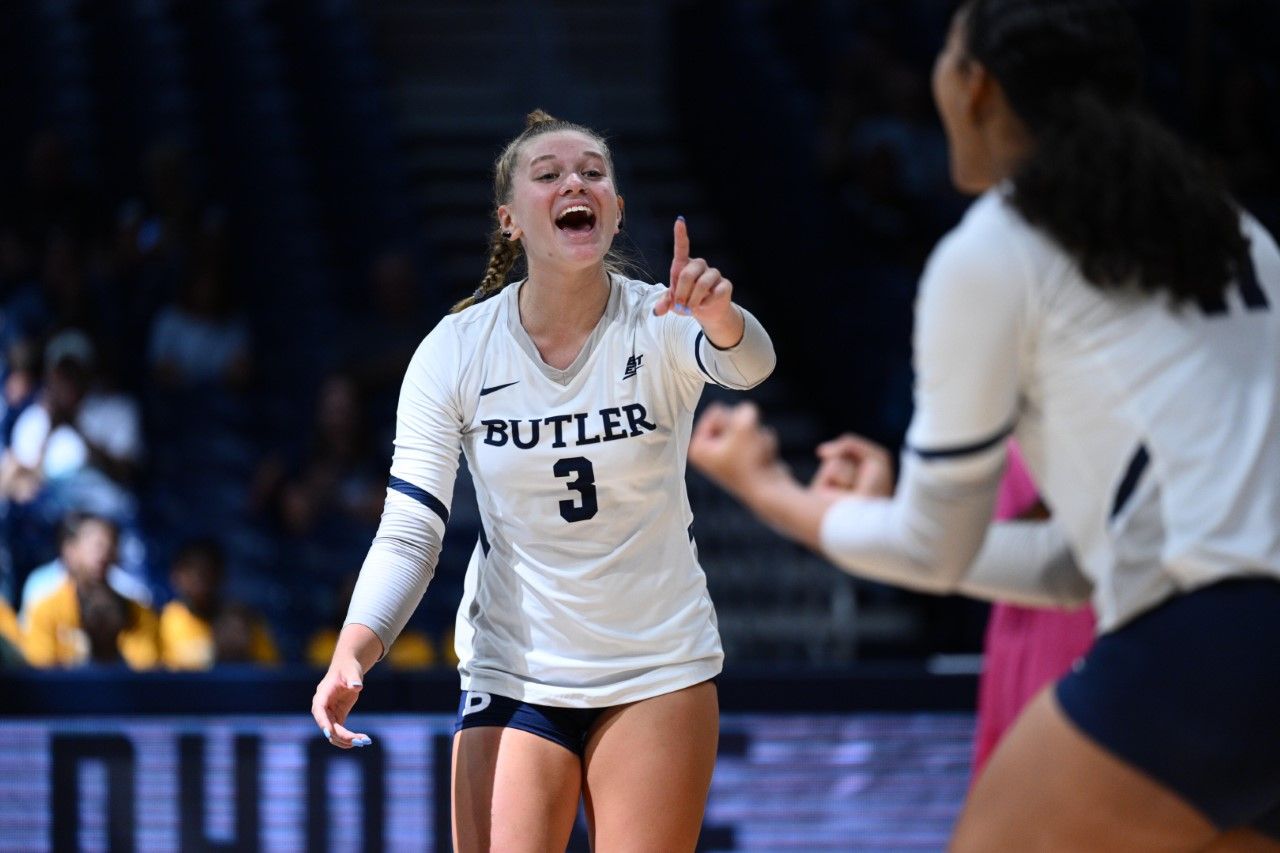 Freshman setter Cora Taylor celebrates after the Bulldogs gain a point against Missouri on Sept. 16.

This past weekend, the Butler volleyball team hosted the Bulldog Brawl with four teams– Ohio, Missouri, Central Michigan and Notre Dame. The Bulldogs did not play the Fighting Irish.

They opened the Brawl on Thursday against Ohio. After getting within one in the first set at 13-12, the Bulldogs were not able to carry their momentum into a lead and dropped the opening set 18-25. The two teams were pretty equal on the offensive side, both surpassing a .300 hitting percentage. The Dawgs found themselves in a similar situation during the second set coming back from behind. Senior Marisa Guitisi and freshman Cora Taylor’s block propelled them to a 20-20 tie resulting in back and forth play. Despite the late-set tightness, a kill from the Bobcat’s Lauren Park and a Bulldog error led to a Bobcat win 24-26. Throughout the entirety of the third set, the Bulldogs weren’t able to get their offense going as they hit .077 in the final set compared to a .204 Bobcat hitting percentage. As a result, the Bobcats would close out the match with a 20-25 victory.

Following Thursday’s game, Butler faced Mizzou on Friday. The Bulldogs came right out of the gate strong, forcing a commanding 17-12 lead against the Tigers. The defense held Missouri to a .087 hitting percentage with sophomore Mariah Grunze racking up eight kills in the opening set. Butler hit a rough patch and could not overcome Missouri’s dominant offense in the second set as the Tigers hit. 407 to even the match at 1-1. The third set was the closest one with ties throughout the entirety of the set reaching 21-21. Missouri’s Kaylee Cox helped propel the Tigers to a 22-25 set victory. The fourth set unfortunately wasn’t as competitive with the Bulldogs hitting -.020 in a 14-25 loss. Grunze had 18 kills in the Bulldogs’ 25-22, 15-25,  22-25 and 14-25  four set loss.

The team concluded preseason play against Central Michigan on Saturday. Unfortunately, the Bulldogs could not match the Chippewas’ runs and dropped three straight sets 14-25, 16-25 and 18-25. They opened up the match slowly as the Chippewas took an early 6-1 lead resulting in Central Michigan coasting the remainder of the first set. Grunze again led the offensive attack with five kills in the opening set. In the second set, the teams were tied at 10-10 before CMU would go on a 6-0 run and never looked back. The third set followed a similar pattern as the Bulldogs were at a 9-9 tie, but, once again, CMU gained ground 17-11 and took the set. Alongside Grunze, freshman Rylie Tam, junior Amina Shackelford and Guitisi contributed on the offensive side.

At the end of the Brawl, Grunze earned a spot on the All-Tournament team posting 39 kills throughout the weekend.

Although the Bulldogs did not end the weekend with the results they would’ve wanted, they’ll be able to learn from their mistakes and use it to their advantage against Big East opponents.

The Bulldogs will turn their attention to DePaul where they’ll head to Chicago to play the Blue Demons on Friday, Sept. 23 at 8 p.m. before taking on No. 19 Marquette Saturday at 7 p.m. in Milwaukee.