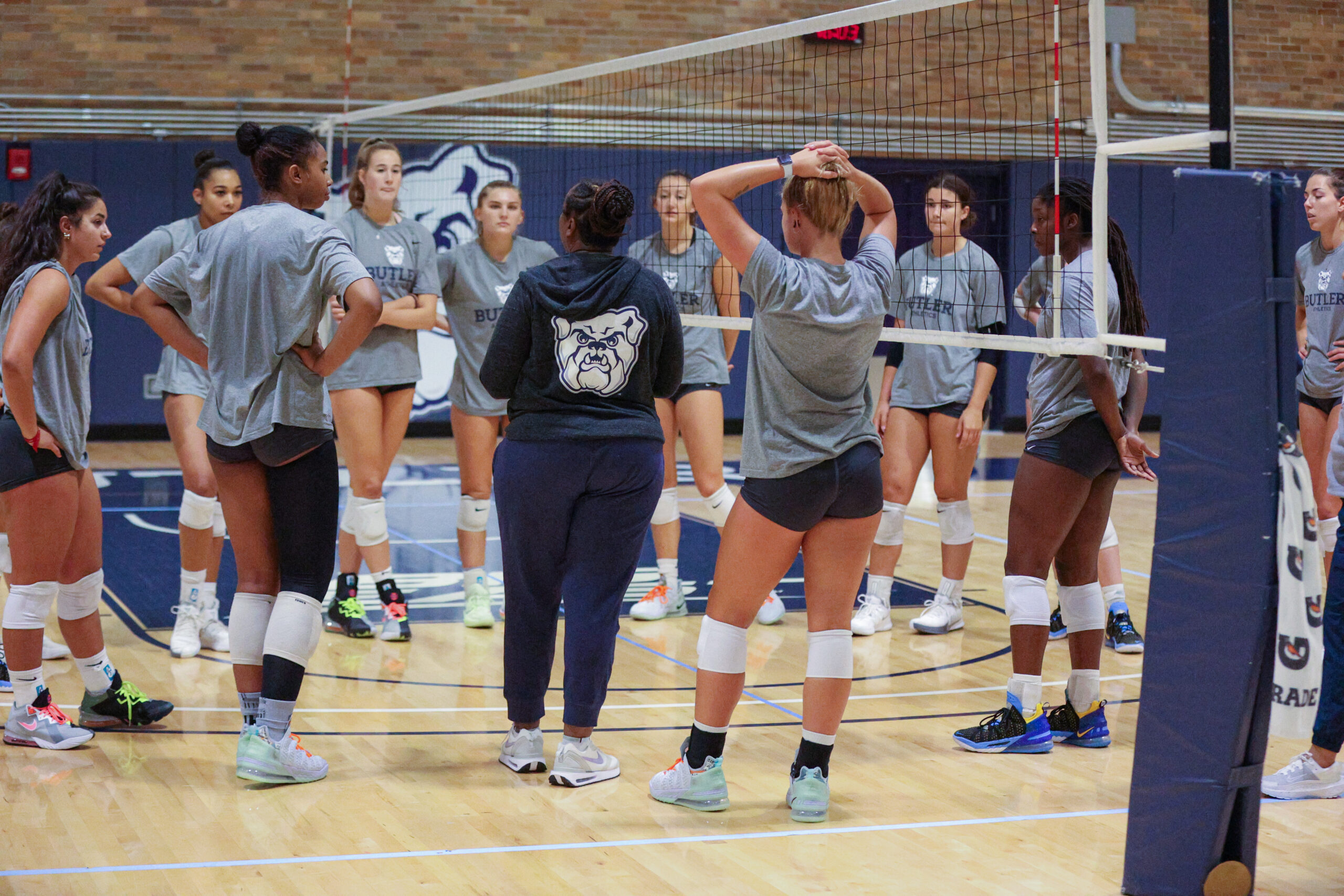 After starting the season strong with a 6-3 record, the Bulldogs are starting to gear up for competitive conference matches. They’ll wrap up non-conference play in the Bulldog Brawl at Hinkle starting Thursday, Sept. 15 before starting Big East play on Friday, Sept. 23 in Chicago against DePaul.

Right out of the gate, the Bulldogs will open conference play against three out of the four teams that were in last year’s conference tournament — DePaul, Marquette and Creighton. Not only will all three be demanding and exciting games, but they’re all on the road — requiring Butler to persevere through the challenges of traveling. With the team playing one game on the road each time and then traveling back home quickly, senior Megan Sheridan spoke about how they’ll have to fight through the fatigue that comes with traveling.

“It sometimes can be hard when we’re traveling, especially when we’re going so far,” Sheridan said. “If we’re on a bus, it can be long days of travel but that doesn’t mean we can make any excuses or not play as well as we can. We have a really tough schedule for the first four games so we’ll have to bring our ‘A’ game every single time no matter what.”

Senior Jaymeson Kinley added that staying hydrated and the team staying off of their feet can help them offset the exhaustion of traveling.

The Bulldogs have played in three non-conference tournaments allowing the coaching staff and team to get a feel for where they’re at. Although pre-conference play doesn’t count towards the conference record, they’ve used the matches to their advantage. After playing four seasons at the University of Missouri-Kansas City, graduate transfer Maddie Renn understands how preseason can help impact the preparedness for conference play.

On Aug. 16, the Big East Volleyball Preseason Coaches’ Poll released their annual poll with Creighton being favored to defend their conference championship. The poll ranked Butler to finish seventh, but they’re currently tied for the fourth best record out of the 11 Big East teams. Although Butler’s ranking is not ideal, it could be a blessing in disguise at the end of the season.

“I think honestly [the] preseason poll is awesome — we’re letting it fuel our fire and knowing that people are underestimating us,” Renn said. “We really think that going into [games], we can beat a lot of those teams that are ahead of us, so going into those games and playing strong and just knowing we kind of have a chip on our shoulder and want to upset some people and surprise some people.”

Along with the rankings, the preseason All-Big East team was released with Creighton sophomore Norah Sis being favored to win the prestigious player of the year award. Other unanimous selections include UConn graduate student Caylee Parker, DePaul junior Jill Pressly, St. John’s graduate student Rachele Rastelli  and Villanova junior Riley Homer. Butler’s own Kinley made the preseason list after taking home the Big East Libero of the Year last season.

Earlier in the season, The Big East also announced that the Big East Volleyball Championship will expand from four to six teams at the end of regular season play. The coaches poll ranked the Bulldogs outside of the top six, one spot behind Villanova. Last season, the Bulldogs finished fifth in the conference, leaving them just shy of a spot in the conference tournament. Missing that spot stung, so with the format change, the Dawgs look to use it as an opportunity to make it into the postseason.

“I think it would be a really big goal for us to go to the Big East tournament,” Renn said. “That would be a really awesome opportunity for everyone, so that’s just something we have to keep in mind to play each game knowing that that’s our goal and that’s what we’re working towards.”

As of Sept. 12, the Bulldogs have the second lowest opponent hitting percentage at .176 and have the second highest blocks per set at 2.28 If the team continues to force these stats along with outscoring their opponent in kills, they’ll have the chance of upsetting two teams in the Top 25. Between Renn, Kinley and Sheridan, it’s unanimous that Marquette and Creighton are on everyone’s radar. However, there’s a personal connection between Renn and Creighton.

“For me I want to upset Creighton because my hometown is Lincoln, Nebraska which is 45 minutes away,” Renn said. “It would be really awesome to have like a bunch of friends and family there and do it in front of a big team that I’ve watched all of my life growing up.”

Before the Bulldogs can upset Creighton or Marquette, they’ll finish invitational and tournament play starting with Ohio University on Thursday, Sept. 15. in the Bulldog Brawl at Hinkle.