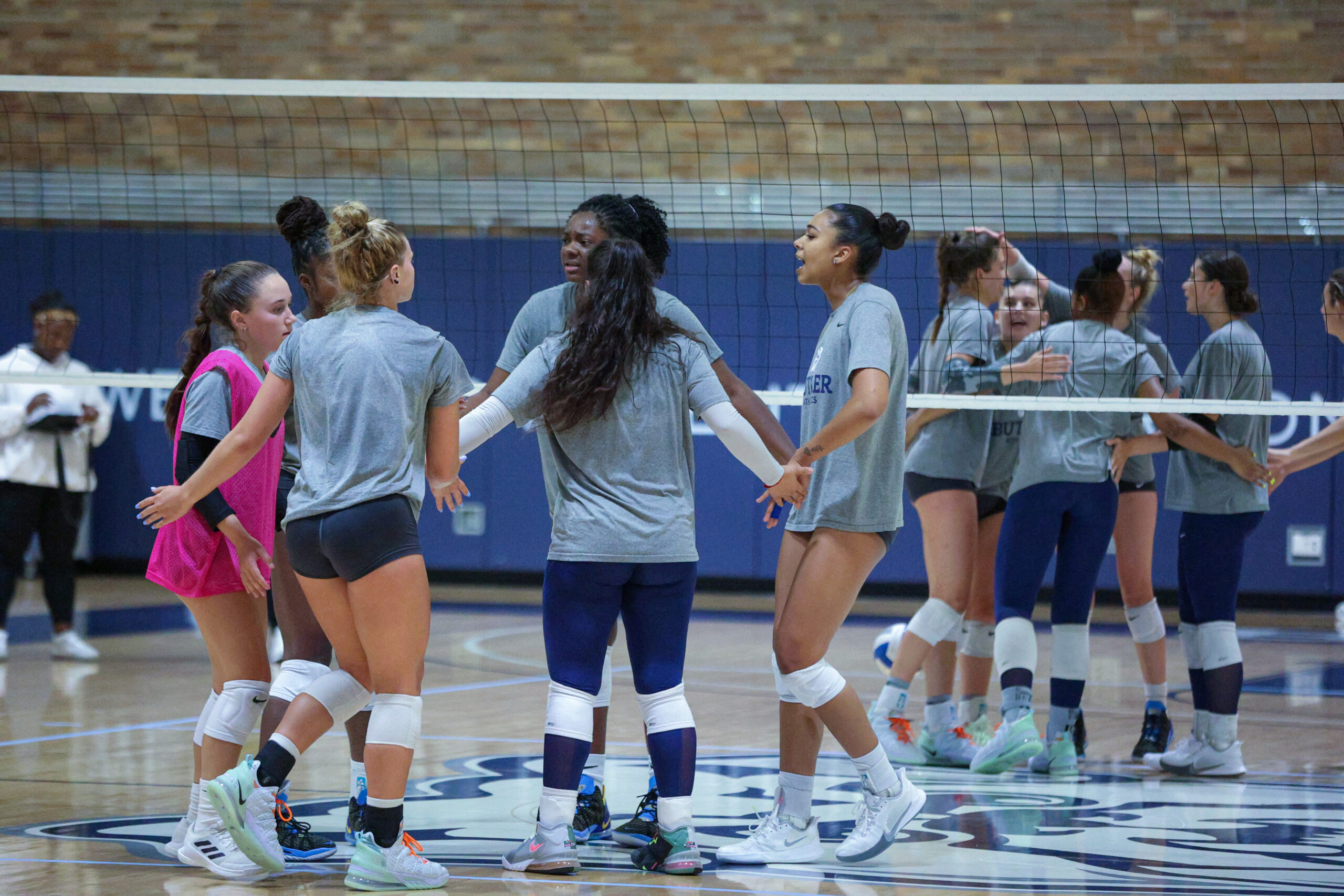 The Butler volleyball team huddles up before a play during practice. Photo by Claire Runkel.

‘Welcome to the Team’ is a Q&A series where the Collegian sits down with first-year student-athletes who are entering their first season at Butler University. These articles will address why they chose Butler, what they hope to get out of their first season and some personal tidbits that you won’t find anywhere else.

RT: I really liked the community of Butler and how all of our coaches are very close with each other and the team. When I came on my visit, I just liked the kind of vibe I got from the team and how hard-working and focused they are.

RT: I think just the competition; it’s a really competitive conference. Anybody can win on any given day and I think our team is really driven to do well this year. I think that’s going to require us to upset or shock some people, but we don’t really view it as that. We’re just ready to go out there and compete.

JS: I saw that you’re from Florida, so what are you most excited about from the change to the Midwest?

RT: I’m excited to really experience four seasons because Florida, it’s just hot and humid and you have rainier seasons. I think it’ll be cool to have four parts of the year that are different. The winter will definitely be something, but we’ll get through it.

JS: Who are you most looking forward to playing and why?

RT: For me, I’m probably most excited about playing Missouri just because I grew up right next to the University of Florida, so I’m an SEC [Southeastern Conference] family. That’s all the sports I’ve watched growing up, so getting able to play an SEC school is really cool for me.

JS: What does your game day routine look like? Can you walk me through it?

RT: Well, like [Friday, Aug. 26] we’re going to go to class in the morning and then we kind of all just get in the gym, hang out in the locker room, play music and then we go have our serve and pass. We just get moving on the day, get a feel for the court. Then, we normally have a meal, start warming up and everybody’s just like super hype. There’s a lot of music.

Cora Taylor is a 5-foot-9-inch setter from Lawrenceburg, Ind. Fun fact: Taylor’s fractured 23 bones from volleyball, falling off a rock climbing wall and “just being stupid.” Photo by Claire Runkel.

Cora Taylor: I started playing when I was five ‘cause I played soccer for a year and then got kicked out of the team. My mom was a coach for volleyball, so I started going to her practices and started club when I was seven. As soon as I hit 11s year and connected with some of the older girls and started finding out about the whole college aspect and how you can go and play in college, that was just kind of mine. The whole competitive aspect of volleyball and how you have to have every single piece of every single player on the team playing as a collective unit and if not, then the whole entire team falls apart.

CT: I would definitely say the hard working aspect of it, the culture of the team incorporated with the coaches that were in it and the different coaching styles of all three of [the coaches] that are there.

CT: Definitely the competition. I’d say every single team in the Big East is kind of around the same skill level, so on any given day any team can win. We come out and beat Creighton or beat Marquette — one of the biggest teams in the Big East. It’s just depending on who wants to work the hardest that day.

JS: How does your hometown of Lawrenceburg, Ind. differ from Indianapolis? What’s the change been like for you from a small town in Indiana to the biggest city in Indiana?

CT: [Lawrenceburg is] definitely a whole lot smaller, I’ll tell you. I would just say the culture up here in Indianapolis is a lot better than down there. I hated my hometown so much just because there was so much drama and you couldn’t really get away from it, but up here there’s so many different things you can do to keep your mind off of things.

JS: What’s one volleyball myth that you want to bust?

CT: That it’s easy to play volleyball. Everyone always says ‘Oh, I can beat you one-on-one’ or ‘I can beat you two-on-two’ and then all the guys are just like ‘Oh, volleyball is so easy to play’ when there’s all these little tiny nitty gritty things you have to get perfect that people just don’t understand unless you actually play.

JS: What’s your pre-game meal? Why?

CT: I wouldn’t say I really have a pre-game meal, but pre-game drink, I always have to have an energy drink ‘cause if not I’ll probably crash on the court.

Brooklyne Darby is a 5-foot-9-inch outside hitter/defensive specialist from Mason, OH. Fun fact: Darby is a certified yoga teacher. Photo by Claire Runkel.

Brooklyne Darby: I started when I was eight. I also danced at that time, but then I started doing club when I was nine. I had a really awesome coach that really made the sport fun. The older girls — who were also collegiate athletes or former players — would come and talk to us. I was just like ‘That’s what I want to do.’ There were these banners in our gym and it was of all the girls who left the club and played in college. I was like ‘I’m going to get a banner,’ so that was when I decided.

BD: Definitely the hard working aspect of our team and the coaching staff is really awesome. It was also a plus that they’re all women of color, so I thought that was really good representation to have and that’s something that I can connect with.

JS: Why is representation so important for you?

BD: Definitely hoping for some upsets this year. Just want to go after it.

JS: Which team(s) do you want to upset?

JS: Your hometown of Mason, OH is close to a big city, so what differences have you noticed so far between Cincinnati and Indianapolis?

BD: I really like the song “WAIT FOR U” by Future, ft. Drake and Tems; it’s just immaculate vibes.

JS: What do you want to experience while playing Division I volleyball?

BD: I’m really excited for the game day feel. Home games in Hinkle are going to be really really cool and seeing all those people cheering us on and the rivals not cheering us on.