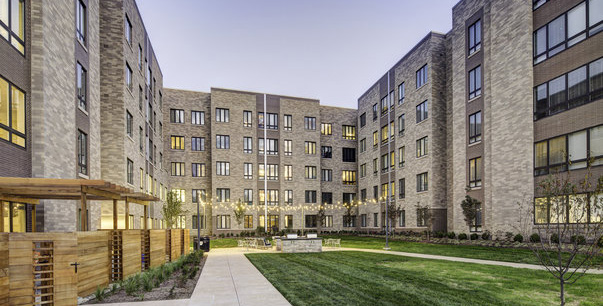 Fairview and Irvington are the expectation of housing at Butler, but are they the reality? Photo courtesy of imegcorp.com.

When I started my first semester at Butler last year, there were three areas where my expectations of Butler did not match the reality. Coming to college and quickly realizing that what Butler advertised is not what campus was actually like was quite deceiving. While Butler has a lot to offer, the way they market housing, food and diversity to students does not match what is actually on campus.

With housing, it is clear that Butler advertises the nicer and newer residential houses, and leaves out the older or less ideal housing. Irvington and Fairview, which opened between 2016 and 2018, have fly-through videos on YouTube where there are tours of the rooms, common spaces, gyms and so on. However, when it comes to Residential College and on-campus apartments which according to Butler’s website opened in the 1980s, Butler does not give information to students about what their housing will look like.

Chloe Enk, a junior secondary education and math double major, talked about how easy it would be for Butler to put a little more effort into giving students better information about what their housing will look like.

“I know that other colleges have way more in-depth dorm tours,” Enk said. “It really probably wouldn’t take too much out of them to just have someone go through and show them a little slower”

It can already be a hard transition coming to college, and not having the resources to see what your room will look like prior to moving in can make it even more difficult. If you are a student who is living in ResCo, Apartment Village, University Terrace, South Campus apartments or Butler Terrace, the likelihood of getting a good tour from the university is low.

Housing is not the only thing where the expectations Butler provides do not match the reality. Prior to coming to Butler, I did not realize that your options for food as a first-year were really only the Marketplace at Atherton, ResCo or Plum Market.

“I had higher expectations for options and stuff, and I think coming in, I was like, ‘Oh, it’s really not what I expected,’” Enk said. “So I guess food kind of did not meet expectations.”

Personally, I did not know much about Butler dining before I came to campus. However, you learn pretty quickly that getting gifted a DoorDash gift card could make you cry happy tears. The convenience of ordering good food and having it delivered to your dorm brings so much more joy than eating on campus ever could.

Natalie Virgil, a first-year psychology major, realized in her time at Butler that they are quick to advertise the positive things around campus. Moreover, there are reasons that the less than ideal things about campus are not emphasized.

“But you know, they don’t talk about Atherton food for a reason and don’t highlight ResCo,” Virgil said. “They’re very selective on what they choose to include, which is kind of interesting seeing it now in person.”

Butler chooses to showcase the positive aspects of campus, allowing students to believe that that is fully what campus is like. Butler is selective in what they choose to display to students and some of the expectations they create can leave students a little shocked once on campus. More specifically, I mean diversity at Butler.

Butler does try to celebrate diversity and create inclusive classrooms and environments around campus. However, they are far from perfect. Butler’s portrayal of campus diversity is far from what they actually execute around campus.

As a student who wants a diverse campus in every way, seeing how Butler uses promotional material to make campus seem much more diverse than campus really is. Seeing how diversity is versus what it is really like when I got to campus was shocking and quite disappointing.

Manuel Alarcon Nava, a senior multilingual studies major, finds that Butler’s reality of diversity is far from what they claim it is.

“I think Butler kind of lacks that confidence in leaning into those initiatives of diversity and inclusion, because they understand it is so premature,” Alarcon Nava said.

When I came to Butler, the lack of diversity in race, sexuality and ability was one of the first things I noticed. I went to an extremely racially diverse high school and grew up in a diverse community. When I realized that it was not as diverse as they advertised it was, I was shocked. I was so used to being in diverse groups of people, that when I got with my first-year orientation group, I quickly realized that Butler is not as diverse as the university had made it seem.

This expectation that Butler is very diverse is simply inaccurate. According to the statistics on Butler’s website, in 2021, 17.3% of full-time undergraduate students were racial minorities. Virgil found Butler’s lack of diversity to be quite shocking.

“That’s definitely interesting considering that, I don’t know, I expected to come to college and to see more diversity,” Virgil said. “But that was kind of shocking to me.”

It does not take long to see that while Butler is trying to celebrate diversity, be inclusive and create a more diverse campus, there is still a lot more they could be doing. Butler emphasizes diversity in their advertisements of the campus in order to attract more people of marginalized groups when really, Butler should be focusing on honoring and celebrating the diversity we have, but also trying to grow our diversity rates. Butler’s diversity is something that matters a lot to many of the students around campus.

The reality of housing, food and diversity on campus are large parts of student life. The university should be upfront about the reality of these aspects of campus culture. Students are going to see them once they get to campus, so having more accurate expectations will mitigate new students’ culture shock.

I have three more years at Butler, and I am hoping that the gap between these expectations and reality shrink over the rest of my time here.