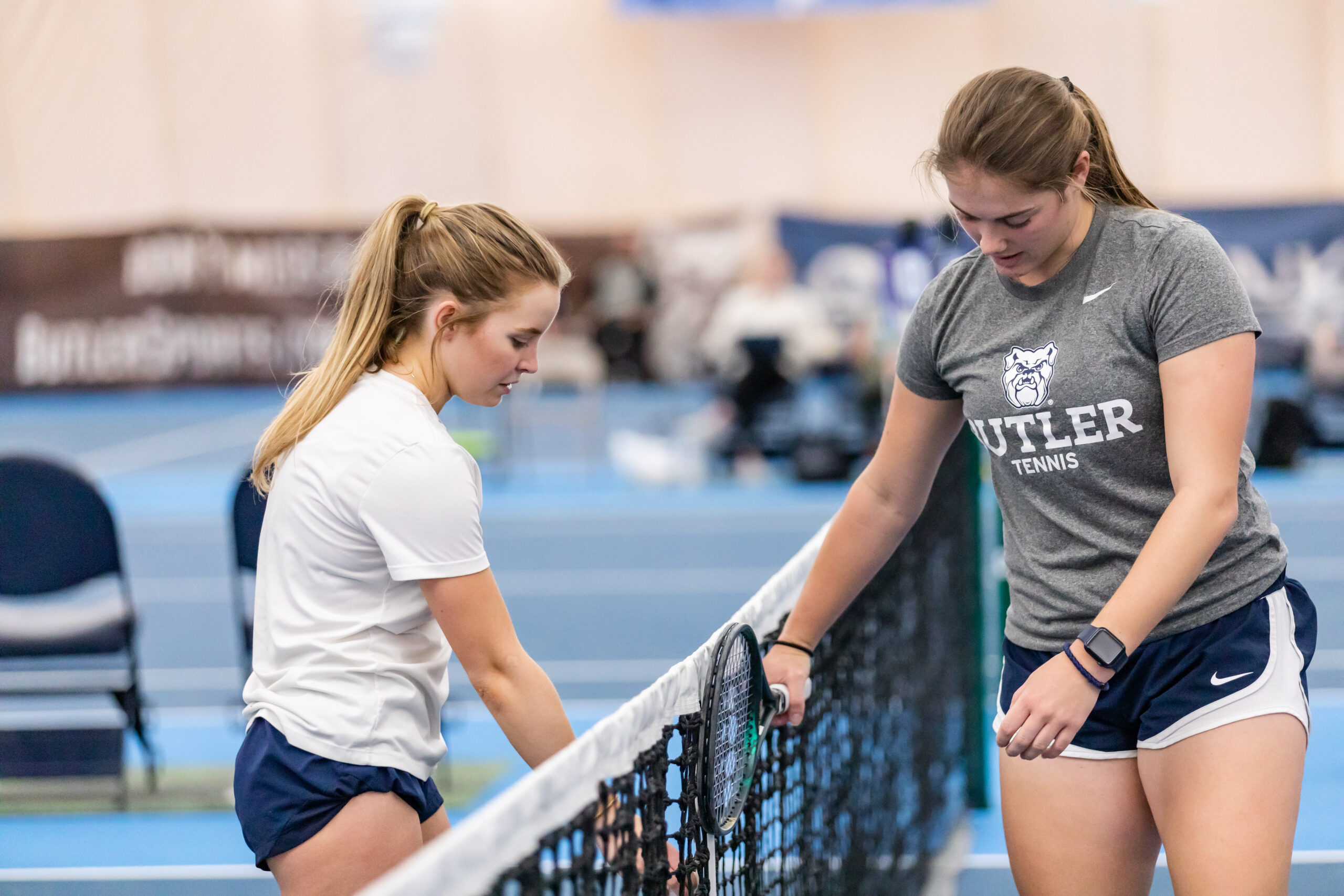 Freshmen Katie Beavin (left) and Norah Balthazor (right) inspect the net during a practice session in the Butler Tennis Bubble. Beavin and Balthazor are apart of the five freshman that joined the women’s tennis program for the 2021-22 season. Photo by Lauren Hough.

This week, sports reporter Katerina Anderson sat down with three first-years on Butler’s women’s tennis team. All three of them are from out-of-state.

Emma Beavin is a 5-foot-2 tennis player from Louisville, Kentucky. Beavin is a psychology major and played varsity tennis all four years of high school. Photo by Lauren Hough.

Emma Beavin: So when I was looking at schools, I wanted a school that was not too far but not too close to home and Butler’s like two hours away from my house, so it’s perfect location. I also love the small school community. I love that all the teachers know me by name, and they actually want me to succeed. I’m not just a random number or a person out of like, 100 kids in a class. I also knew Natalie [Boesing] on the team before I joined Butler, and I always loved Natalie. And when she told me she loved Butler, I was like, “Alright, I gotta go.”

KA: What was the biggest adjustment you’ve had to make in college?

EB: I think the biggest adjustment I had to make was the time management itself. Like I don’t have my parents to wake me up. I’d have my parents be like, “Hey you got this coming up,” “You got a tournament,” and “You got practice too.” I have to organize everything myself and that was pretty much the biggest change for me: managing my time all by myself.

EB: This is probably the closest team I’ve had. There’s no class differences. Everybody is pretty much a team player. Everybody wants the team to do good. And that’s what I really like about Butler. Everyone’s really good at being a good team player, and we all bond really well.

KA: Who do you look up to on the team?

EB:  I think someone I really look up to and want to be like is definitely Delaney [Schurhamer]. Just her level headedness — man, I really could use that. Nothing fazes her. Nothing gets to her. She just plays like a literal robot. She’s probably the toughest person I’ve ever had to play because you just can’t get to her. It’s hard to figure out.

EB: I usually, like every day, get a Venti iced black tea lemonade. If I want some food, I’ll usually get the red pepper egg bites, and then the berry parfait.

KA: What are your goals for the rest of the season?

Norah Balthazor: I was talking to a lot of colleges and when Natalie [Boesing] had committed here, it put Butler on my radar. My dad has always loved this school, but he wasn’t able to go though because he came from a low-income household. I wanted to also be far away from home but also within driving range. It’s six hours from my house so it was perfect. I definitely wanted to get out of Wisconsin. Also the fact that we have indoor and outdoor courts on campus was a big thing.

KA: Did you always know you wanted to go to a DI school?

NB: We’re a DI family. My brother went to Marquette on a scholarship for tennis as well. My younger brothers are also already being scouted and stuff for colleges.

KA: What was the biggest adjustment you’ve had to make in college?

NB: For me, it was definitely laundry. Like I never run out of clothes, but I do always push it to the limit because my mom did laundry every day at our house since we had so many kids.

KA: How is the team camaraderie?

NB: Yeah, everyone’s really chill. There’s no divides between sororities, grades or even skill level where you’re at in the lineup. Yeah, we all get together really well. The seniors help us with rides because they typically have cars, or they give us advice like when to practice or when to do extra. Or even what to wear and stuff.

KA: Who’s most likely to show up late to practice?

NB: I have had problems showing up on time my whole life. I’m usually running to get to practice because I set a goal and then I forget something or I have to go to the bathroom, or I forgot food. So yeah, that’s me.

KA: What’s your favorite place that you’ve traveled to?

NB: The Badlands. We went hiking there and it was amazing. I did a sunrise hike and I was out there for hours just exploring everything.

KA: What match are you looking forward to playing?

NB: I’m super excited to play Marquette because that’s my brother’s team and I would love for us to absolutely destroy them.

Katie Beavin is a 5-foot-2 tennis player from Louisville, Kentucky. Katie is a finance major, played eight seasons of varsity tennis in high school and went to state for doubles in 2021. Photo by Lauren Hough.

Katie Beavin: When I was looking at schools, I was like, “I’m gonna be spending most of my time with the team.” So I just wanted to find a school where I vibed with the team the best because I know I’d spend so much time with them. When I visited and I talked to and hit it off with a few of the players, I just really liked Butler. I just vibed really well with the team so I was like, if I liked the team then I’ll enjoy playing here.

KA: What do you miss the most about your hometown?

KB: Definitely my friends, just people that I’ve grown up with my whole life. Here you’re kind of like meeting a lot of people for the first time and you got to make those bonds that you already had back home.

KA: How has it been juggling both academics and athletics in college compared to high school?

KB: Yeah, it’s kind of hard for me. Maybe it’s just because right now I’m pretty behind on my schoolwork and I’ve been thinking about it a lot. But it just goes up and down. Some days you’ll be like, “Oh, this was an easy week.” But then the next week you’ll have matches during the week and on the weekend. And then like three exams and you’re like, “Oh, I have to fit weightlifting in there too.” And then you’re like finding out what time to do your homework that’s not like midnight.

KA: Who do you look up to on the team?

KB: Sara Linn, she’s a senior right now. She was just really welcoming to all the freshmen, and I want to be like that for the next freshmen that come in. She’s super down to earth and respects everybody and is just a good practice partner. She recently got injured and even through that she’s been the best teammate and has helped us even though she’s the one that’s injured.

KA: What has been your favorite match thus far?

KB: My favorite match was my very first college match ever. I was walking to the bus and I was like, “Oh my god. It’s my first college match ever. I’m about to cry. This is what I’ve been working for.” And then I played this insane girl from Spain and I ended up beating her on a third set. She was from Purdue so every time we play Purdue I get so excited because we’ve played them twice, and I haven’t lost to any of their players. That was definitely my most memorable match because it was my first match ever and my dad was there and I saw him jump up and down in the stands. And I was like, “I just beat a Big Ten girl.” I was just so hype.

KA: What are your goals for the rest of the season?

KB: My goal and I think everyone’s goal on the team is to just to fight for the number one [spot]. I think everybody should be fighting for the number one spot. I think setting high goals for yourself like that is gonna make all the team better. We have a really good number one player but everybody fighting for it would just make us work a lot harder. Definitely a goal is doing very well in the Big East, especially with this team. I think winning with a team that I really like would just feel really good. A way we accomplish that is just like a working mindset. We need to have a growth mindset and push each other. Stay positive.