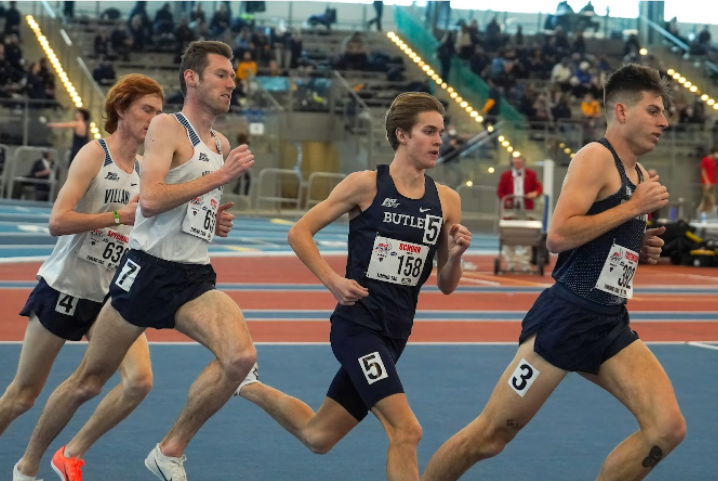 Sophomore Carter Schorr charges through the field in the mile event at the Big East Indoor Championships on Feb. 26, 2022. Photo courtesy of Butler Athletics.

On April 9, Butler track and field continued their outdoor season at the Illini Classic in Champaign, Illinois.

On the men’s side, Bulldog runners triumphed in two events. Sophomore Drew Herman soared to victory in the high jump with a 1.90 meter leap. Sophomore Carter Schorr won the 3000 meter steeplechase with a time of 9:08.47.

The men’s distance squad performed well in the 5000 meter race as all five Bulldogs entered in the event set personal best times. Junior Nick Doud, sophomore Sean Robertson and junior Ryan Adkins were the top Butler runners in the event, placing third, fourth and sixth, respectively, in a field of 38.

On the women’s side, the distance runners also produced the most notable results. Freshmen Quinn Shanahan and Ashlyn Minton had solid finishes in the 5000 meter race. In a field of 28, Shanahan finished sixth with a time of 17:17.56, while Minton followed her in seventh with a time of 17:21.06.

Freshman Lexi Affolter and junior Morgan Walsh set personal bests in the 1500 meter race with times of 4:41.28 and 4:41.40, respectively.

Next week, the Bulldogs head to the Bryan Clay Invitational in Azusa, California and the Mt. Sac Relays in Walnut, California. With the Big East Outdoor Championships now only a month away, the team will hope to build more momentum out west.