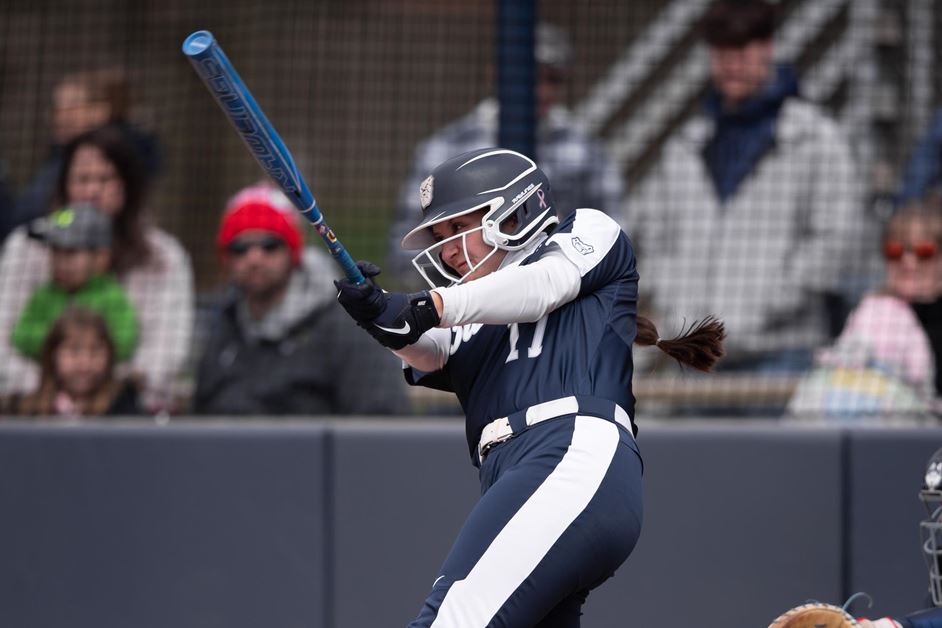 Sophomore Monique Hoosen swings for the fences in the Bulldogs’ 3-2 victory over St. John’s on April 9. Photo courtesy of Butler Athletics.

Butler softball was defeated by a score of 11-5 in Terre Haute. The Bulldogs took an early lead after Lauren Fey scored on an Indiana State error in the first inning. However, the Sycamores scored three runs in both the second and third innings to take a commanding lead, and they never looked back.

Butler men’s tennis lost 4-3 to Big East rival Xavier. The Bulldogs started strong in singles play as both Michael Dickson and Patrick Joss triumphed in straight set decisions. Alvaro Huete Vadillo also won his match to tie the score at 3-3. Thomas Brennan lost a close final match against Xavier’s top player, Diego Nava, clinching the win for the Musketeers. Following the loss, the Bulldogs fell to 10-9 on the season.

Notable performances included Lauren Fey’s two runs and three hits in four at bats. Pitcher Karli Ricketts only allowed one hit, while striking out four. With the victory, the Bulldogs improved to 20-13.

Butler baseball struggled in a 13-3 loss to Villanova, dropping to 14-16 on the season. The Bulldogs got on the board first with a Ryan O’Halloran RBI single to right field, which scored Aaron Steinhart. The Wildcats took their first lead of the game in the third inning with a three-run homer. One run in the fourth, five runs in the seventh and four runs in the eighth allowed the Wildcats to pull far away from the Bulldogs.

Butler runners won two events at the Illini Classic in Champaign, Illinois. Drew Herman soared to victory in the high jump with a 1.90 meter leap, and Carter Schorr won the 3000 meter steeplechase with a time of 9:08.47. Nick Doud scored a podium spot in the 5000 meter race at a personal best time of 14:24.60.

The Georgetown Hoyas bested Butler lacrosse on a chilly day at Varsity Field. The Hoyas scored the first six goals of the game and jumped out to a commanding 11-2 lead at halftime. In the second half, the Hoyas controlled their advantage and wound up with a 17-7 victory at the end of the game.

Top performances for the Bulldogs included Lindsey Schreiber’s three goals and Gabryelle Bodine’s two goals on a game-high nine shots. The loss dropped the Bulldogs to 6-6 overall and 0-2 in conference play.

A day after their big loss to Villanova, the Bulldogs played the Wildcats much closer, but still fell 6-4. Butler came into the final inning down by three runs. A Garrett Gray single scored Ryan O’Halloran to cut the lead to two. A comeback was looming as the Bulldogs got back to the top of the order with two runners on base. However, a ground out to the pitcher ended the comeback hopes and dropped the Bulldogs to 14-17 on the season.

After falling behind early, Butler softball rallied to win 3-2 in the second game of the series against St. John’s. The Red Storm jumped out to an early 2-0 lead in the first inning. Maddie Moore’s second inning RBI double cut the Red Storm lead to one run. The Bulldogs snatched the lead away with Monique Hoosen’s ninth home run of the season, a two-run blast to center field.

Following a strong performance in the first game against the Red Storm, pitcher Karli Ricketts continued to shine after entering the game in the fourth inning. She struck out six and did not allow any hits, runs or walks. The Bulldogs improved to 21-13 on the season and 9-4 in Big East play.

Butler men’s golf finished 12th out of 14 teams at the Boilermaker Invitational, competing against one of the strongest fields in the Midwest. Over two days of competition, the team posted a total score of 923, 71 over par. Raymond Sullivan was the top Bulldog performer of the weekend, tying for 16th at a total score of 218, 5 over par. Sullivan had a few shining moments on Sunday, including an eagle on the 605-yard second hole.

After dropping the first two games in the series, the Bulldogs finished on a high note with an 11-3 victory over the Wildcats. Villanova’s three runs all came at the bottom of the first inning. Butler clawed back within one run in the fifth inning before firmly grasping the lead in the seventh inning with a Kollyn All two-run RBI double.

By the end of the game, the Bulldogs put up 15 hits with James Gargano, Aaron Steinhart and Garret Gray each accounting for three. Pitcher Nick Eaton started the game, but Derek Drees was credited with the win. The victory moved the Bulldogs to 15-17 on the season.

Butler softball’s good fortune came to an end with an 8-3 loss in the final game of their series against St. John’s. The Red Storm started strong with a two-run first inning. Paige Dorsett hit an RBI sacrifice fly in the third and an RBI double in the fifth to even the score. The Red Storm proceeded to put up three runs in the bottom of the fifth to wrest control of the game.

The highlight of the game for Butler was Teagan O’Rilley’s home run in the sixth inning, which was her third of the season and fourth of her career. Karli Ricketts’ streak of strong performances came to an end as she allowed seven hits, eight runs and five walks. The Bulldogs were relegated to 21-14 overall and 9-5 in conference play.

Following their close loss to Xavier on Friday, Butler men’s tennis fell just short again in a 4-3 loss to DePaul. Alvete Huete Vadillo and Michael Dickson both won their singles matches in straight sets. Butler lost a 3-2 lead as Patrick Joss and Borja Miralles fell in their last two singles matches, securing the victory for the Blue Demons. The heartbreaking loss dropped the Bulldogs to 10-10 overall and 2-3 in conference play.

The Bulldogs struggled mightily in a 7-0 loss to the Musketeers in the penultimate match of their regular season. Xavier won every singles match in straight sets, dropping the Bulldogs to 7-13 on the season.

Softball vs. University of Illinois Chicago

The Bulldogs rebounded from their loss on Sunday with a 3-2 win over UIC at home. Lauren Fey scored off of an error in the first inning to give Butler the early advantage. Another UIC error scored Bri Avery in the third inning to put the Bulldogs up 2-0. After the Flames pulled within one in the fourth inning, Ella White hammered her third home run of the season to make the score 3-1.

With UIC’s tying run on third base in the final inning, Monique Hoosen caught a line drive for the final out, ending any hope of a Flames rally. The Bulldogs improved to 22-14 with the close win.

Butler baseball was pounded by Evansville in an 11-1 loss at Bulldog Park. The Purple Aces blasted three home runs in the third inning to jump out to a dominant 8-0 lead. Another homer in the fourth put Evansville up 10-0, all but eliminating any slim chance of a Butler comeback. The Bulldogs were held to two hits in the game and fell to 15-18 on the season.