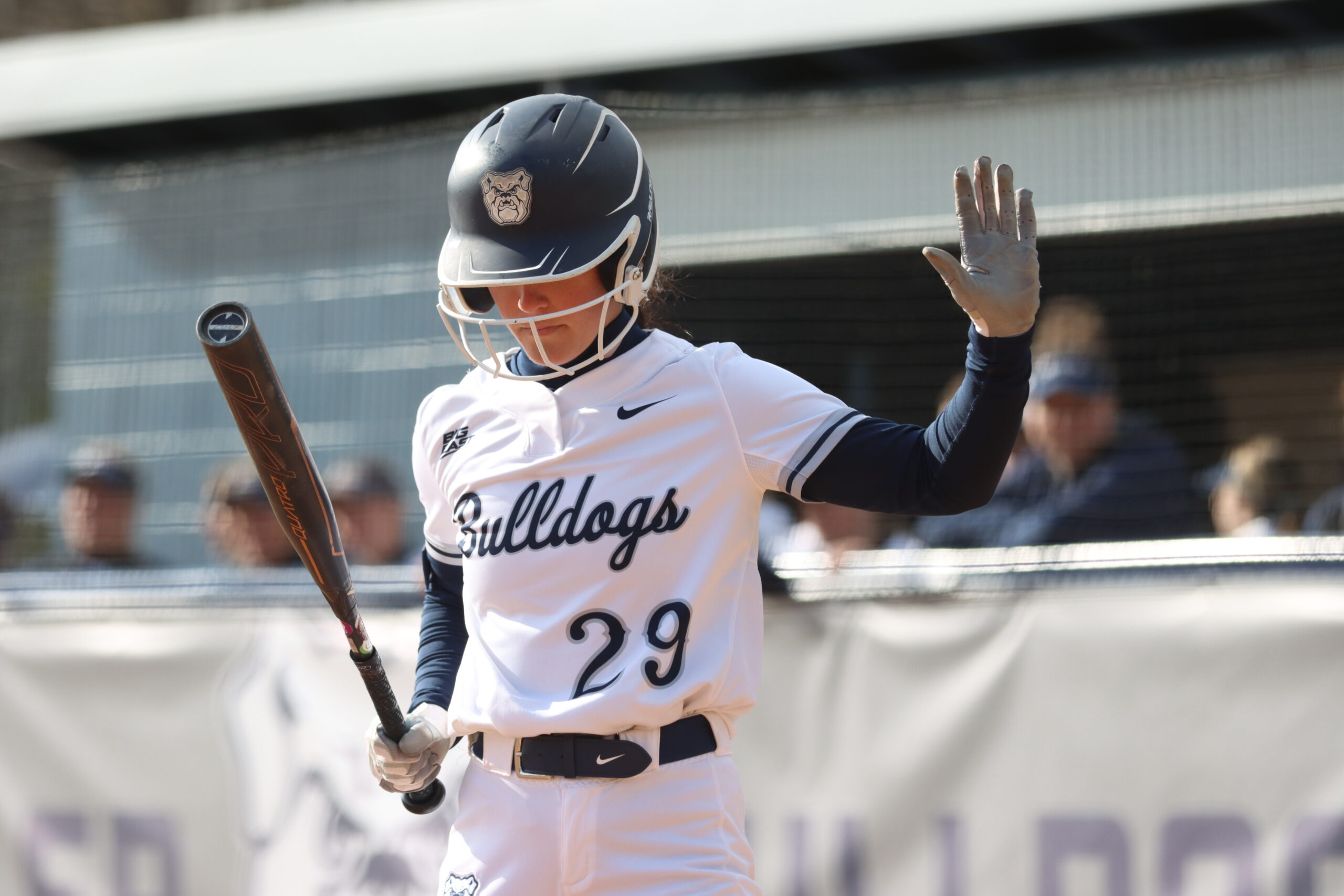 Senior outfielder Bri Avery steps into the batter’s box during a matchup against the Purdue Fort Wayne Mastodons on April 19. The Bulldogs went on to win 3-0. Photo by Francie Wilson.

Many members of the women’s track team impressed at the Bryan Clay Invitational, topped by senior Mia Beckham finishing second in the 5000 meter race with a time of 16:10.00. Beckham’s performance puts her time as the fourth best in Butler history.

The men’s track team enjoyed a successful outing at the Bryan Clay Invitational, with multiple different personal records being set. Junior Jesse Hamlin continued his impressive career as a Bulldog by breaking his own school record in the 1500 meter event, posting a time of 3:38.85, placing him 16th out of the field of 145. Graduate Matthew Wigelsworth finished the 800 meter run with a time of 1:48.92, earning him 17th place and the second best time in program history in that event.

The men’s tennis team defeated Dayton on Wednesday by a final score of 4-1. The Bulldogs swept the Flyers in all four singles matchups after dropping the opening doubles match. Seniors Drew Michael and Thomas Brennan, redshirt senior Michael Dickson and junior Alvaro Huete Vadillo each won their singles contests to secure Butler the victory.

Softball vs. Miami of Ohio

The softball team attempted to take the field one day after defeating UIC, but the contest was canceled due to bad weather.

Butler’s track teams competed in the 5000 meter race at the Mt. SAC Relays. However, graduate student Angelina Ellis competed as UNAT-Butler — declaring herself unattached — during this competition and finished sixth in the 3000 meter steeplechase with a time of 10:00.55.

In the opening matchup of the three-game series, Butler fell to Georgetown 14-8. The Bulldogs actually out-hit the Hoyas 15-14, but were unable to muster any offense until the final inning — which saw six of the eight runs. Junior Scott Jones led Butler with three hits on four at-bats.

In the second game of the series, Butler avenged their Thursday night loss with a narrow 8-7 win. Six runs in the third inning for the Bulldogs was all the firepower needed to push them into a winning position that they would never cede.

In the final weekend before the Big East Championships, the women’s golf team placed third out of seven teams in the IUPUI Invitational. Graduate Ally Ross led Butler, finishing second in the competition. Ross went one-under 71 on Saturday before finishing the regular season with an even-par 72 performance on Sunday.

Following their victory against Dayton, the men’s tennis team obtained their second consecutive win against Marquette over the weekend. In the regular season finale, the Bulldogs defeated the Golden Eagles 4-2 in Milwaukee. Senior Drew Michael won another singles match along with junior Michael Karr, while the duo of senior Thomas Brennan and junior Alvaro Huete Vadillo won a doubles match, as did the pairing of senior Ryan Roegner and junior Zach Trimpe.

Butler fell to 6-7 after their 24-17 loss to Marquette on Friday afternoon. Junior Campbell Connors had four goals to lead the Bulldogs, while junior Greer Bireley had three of her own. Seven other Bulldogs also scored during the contest. Bireley also led Butler with three assists, giving her a team-high six total points.

The Bulldogs were unable to secure the rubber match against Georgetown on Saturday, dropping the final game 8-4. Junior Kyle Van Liere had two of the 10 hits for the Bulldogs — one being an RBI in the 7th inning.

The final two-day invitational before the Big East Championship saw Butler finish eighth out of 13 competing teams. The final round was canceled due to weather. The Bulldogs’ final total was 608, giving them a total score of +40. The hosts, Wright State, finished first in the contest.

Butler was victorious in their matchup against Northern Kentucky, 6-5. Butler scored three runs in the bottom of the first inning to jump out to a 3-0 lead. The Norse chopped away at the lead by scoring a run in the second and third inning.

Butler responded in the bottom of the third inning with two runs, extending their lead to 5-2. The Norse tied the game at 5-5 in the sixth inning, but an RBI single by catcher Aaron Steinhart in the seventh put the Bulldogs ahead 6-5. The Dawgs prevented any comeback attempt by the Norse and secured the victory, moving the squad to 17-20 on the season.

The Bulldogs took an early lead in the first inning by way of senior infielder Lauren Fey scoring on a throwing error, putting the Dawgs up 1-0. The Bulldogs would extend the lead to three with a two-run home run by freshmen infielder Ella White — ending their scoring for the night.

Following the victory, the program improves to 23-14 on the season and sit in third place in the Big East behind Villanova and UConn, respectively.