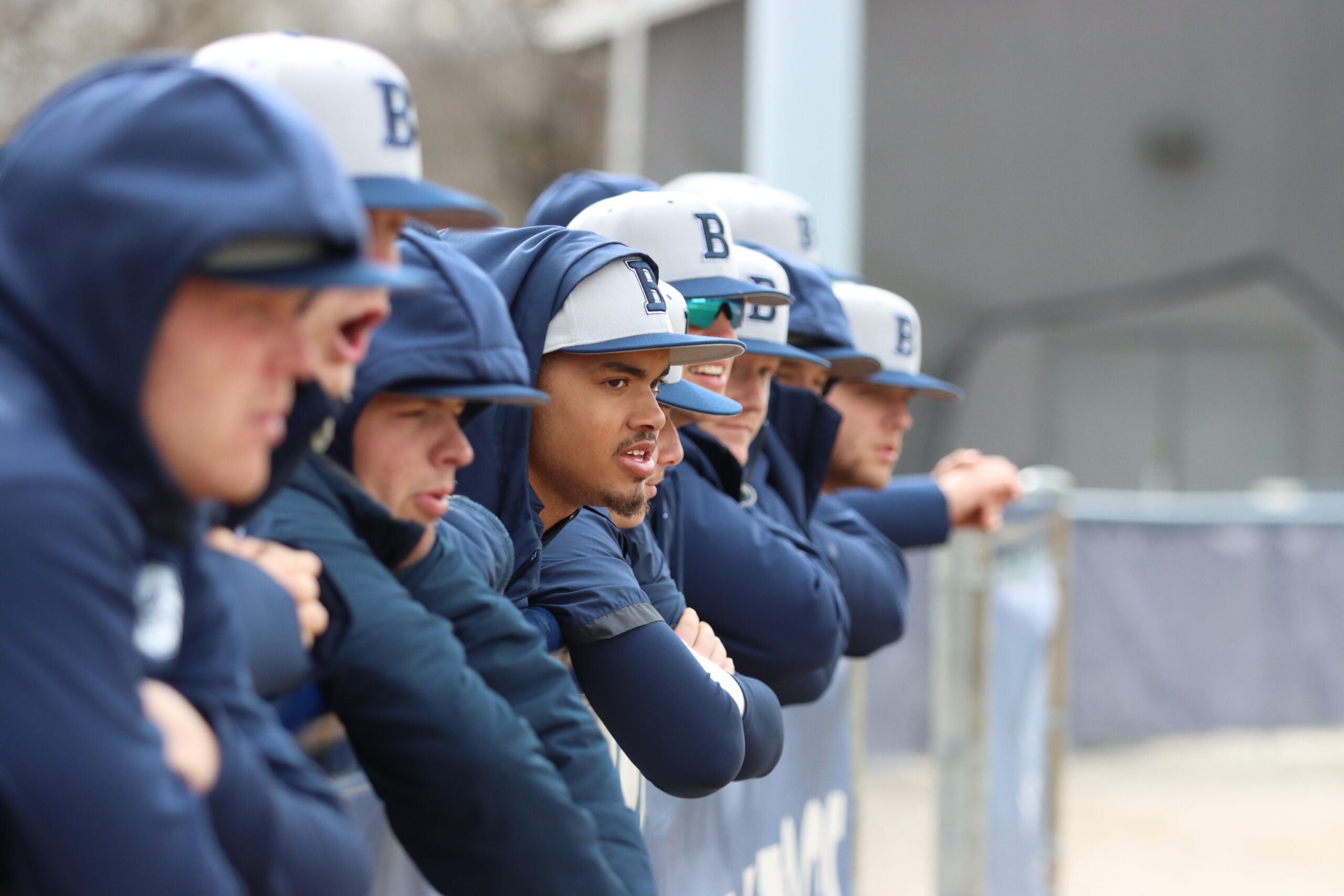 The Butler baseball team watches the action on the field from their dugout during a matchup against Eastern Illinois on April 1. The Bulldogs went on to win 1-0. Photo by Francie Wilson.

The Butler baseball team concluded the first half of their regular season with a 5-2 loss against the Notre Dame Fighting Irish on April 5 in South Bend, Indiana.

Following the interstate matchup, Butler currently holds a 14-15 overall record and sits in sixth place in the Big East. Now, the Bulldogs are preparing for their first series in conference play against the Villanova Wildcats beginning on April 8.

As Butler’s conference play is about to commence, it’s time to take a look at each team in the Big East, how they have fared thus far and how they compare to the Bulldogs.

Villanova was projected to finish dead last in the 2022 season. Although the team lacks star power, the Wildcats have some solid players such as centerfielder Chris Rotondo, who has a .355 batting average, six home runs and 22 RBIs. Rotondo has also been solid defensively in center field for Villanova.

The Wildcats have been led by their senior ace Cole Patten. In his seven starts, Patten has only allowed 15 earned runs over 44.2 innings and has struck out 42 hitters. Unfortunately, the Wildcats have struggled outside of those two players – resulting in them being relegated to seventh place in the conference thus far.

This should be an interesting series and a good first test for Butler as they head into conference play. Both teams are relatively close in both defense and offense, with the only significant difference is that Butler has a higher slugging percentage than Villanova. The extra base hits could be the difference maker between the two teams.

Georgetown has been the most surprising team in the Big East thus far. The Hoyas were pinned to finish seventh in the conference this season, which would put them second-to-last. However, to everyone’s surprise, Georgetown broke out the bats this season to propel them to second place and eight games above .500.

The Hoya’s sophomore first baseman, Jake Hyde, has built up a strong case to be the Big East player of the year through seven weeks. Last season, Hyde batted .159 with no home runs. This year, Hyde has flipped the page and is batting .385 with 12 home runs and just 15 strikeouts over 28 games.

Defensively, Nolan McCarthy has been the workhorse for the Hoyas this season, leading the team in innings pitched and strikeouts. Earlier this season, McCarthy had an incredible run where he struck out 21 hitters over two starts. More recently, he threw a complete game against Villanova for the first time in his career.

Georgetown will be a handful for the Dawgs, as the Hoyas have already crushed 55 home runs this season and are still sending baseballs over the fence at an alarming rate. Butler pitching staff will need to attack the strike zone and not allow free bases for Georgetown. Butler’s pitching looked good against Eastern Illinois, only allowing five runs over 36 innings and holding the Panthers scoreless over the course of 17 consecutive innings.

St. John’s was selected to finish fourth and secure a spot in the Big East tournament in the preseason poll. Contrary to expectations, the Red Storm struggled early on — losing 11 straight games and beginning their season 1-14.

However, behind an incredible Big East player of the week performance by redshirt sophomore Kevin Michaels — who hit the first cycle for St. John’s since 2007 — the Redstorm have gone 9-3 since March 18.

The leader of the team is fellow redshirt sophomore Tate Ballestero, who is batting a .386 with seven doubles, two triples and two home runs. The slugging for the Red Storm has come from outfielder David Glancy, who has blasted eight home runs this year — including a three-homer day against Hofstra.

The Red Storm’s offense has been good, but the team’s ERA is just over 8.00 and the team doesn’t really have a solid rotation as the team has plugged in different starters trying to find out their weekend slate. Luckily for the Red Storm, starting pitcher Brandon Backman has returned, and with four starts under his belt, the graduate student has a 1.62 ERA.

Butler cannot allow themselves to get into a slugfest with St. John’s. If the pitching can limit the three aforementioned players, Butler will be able to handcuff the Red Storm offense. However, with both bullpens struggling between the Big East foes, this matchup will be a must-watch series for lovers of offense.

The Huskies returned to the Big East last year and wasted no time in making their mark. The program captured a Big East Championship over Xavier and earned an automatic bid to the NCAA Tournament.

This year, the preseason polls selected the Huskies to repeat as the conference champions. However, the Huskies will have some ground to make up after losing LHP/1B Reggie Crawford to Tommy John surgery in the fall. Numerous scouts across Major League Baseball have put Crawford as a top draft prospect after he showcased a fastball that topped at 102 in the Cape Cod league.

UConn has started the season 11-1, winning 10 of those games in a row. The Huskies starting rotation has been the backbone to this great start in the college baseball season.

Purdue transfer Austin Peterson has pitched in 45.1 innings and struck out 70 hitters in six starts.

Sophomore Pat Gallagher has appeared in seven starts, producing an ERA of 3.15 and striking out 49 hitters over 40 innings.

Finally, graduate student Enzo Stefanoni has a 3.11 ERA and has only walked two hitters in 37.2 innings pitched. UConn’s starting rotation is one of the best in the country and will be the deciding factor on if UConn repeats as conference champions or not.

On the offensive side, senior outfielder Erik Stock has been a force for UConn with his .402 average, 10 doubles and five home runs so far this season.

The Bulldogs conclude their April slate with a series against UConn. If the offense can get going against this bolstered pitching staff and the team can play sound defense, they could have a chance to pull off an upset over this ranked Huskies squad.

The Xavier Musketeers came into the season projected as a top-three Big East squad, however, they currently sit a game below .500 — and are underperforming expectations — as they are slotted as the fifth ranked team in the Big East.

This is due to the result of poor performances from those who were considered to be Xavier’s MLB prospects. Outfielder Alex Hemlin is only hitting .196 and hasn’t hit a home run yet, seeming to regress after a solid 2021 campaign. The other prospect — RHP Bryce Barnet —  currently has a 7.56 ERA. Despite the disappointing starts to the season for these players, other leaders have stepped up to the plate.

The Musketeers have firepower on offense, ranking first in the Big East in batting average and home runs. Luke Franzoni is the key cog in Xavier’s offense, leading the team with 12 homers and batting just over .300. On the defensive side, Jack Lynch holds a 4-0 record and leads the team in strikeouts. Xavier houses a respectable pitching core with three starters holding an ERA in the 3.00 range.

Butler’s series against Xavier will be tough, but winnable. Holding off the Musketeer offense and getting hits against the weaker parts of their pitching staff could be the keys to success for the Bulldogs.

The Creighton Blue Jays were the projected number two team coming into this season. This team has lived up to expectations thus far, going 15-7 overall and currently ranking third in the Big East.

The Blue Jays are in the position they are currently in due to their strong pitching staff which is ranked second in the Big East. This staff is led by Big East Preseason Pitcher of the Year Dylan Tebrake, who leads the team in innings pitched and strikeouts.

Creighton also hits for contact very well, with a team average of .304, and is frontlined by junior Jared Wegner — who leads the team in home runs. Four Creighton players have a batting average above .300 and are backed by some reliable pitching on the defensive end, making the Bluejays a very balanced squad.

Butler has to limit the damage that the start of Creighton’s lineup can do. This whole team can snag a hit, so it’s crucial for it not to be from one of the Bluejay’s top hitters. This is a tough pitching staff to face, so making the most of the hits Butler gets will prove to be essential if the Bulldogs want to snag a victory or two.

The Bulldogs finish their regular season off against the 5-21 Pirates. Coming into the 2022 season, Seton Hall was projected to be the fifth best team in the Big East. However, they have fallen short of that mark, as they have the fewest wins in the conference. Their failure to generate wins stems from their poor pitching and last ranked offense in the conference. Fortunately among this motley the crew, there are a few treasures on this team.

Redshirt sophomore Will Gale finished his 2021 campaign as an All–Big East second team selection, and leads the team in hits and doubles. This pitching staff has a solid reliever in Alex Nicolosi, who has a save and a team-best 3.00 ERA.

Butler can take care of business in this series by taking advantage of the poor pitching staff in place at Seton Hall. Hits should occur early and often for the Bulldogs, and as long as they neutralize the shaky offense the Pirates yield, wins should not be too difficult to come by.

With the only four available spots in the Big East Championships, the Bulldogs control their own destiny for whether they qualify for the tournament in May. If the Bulldogs can manage to keep their head above water in conference play, they could punch their ticket to Prasco Park for the first time since their entry into the Big East in 2014.