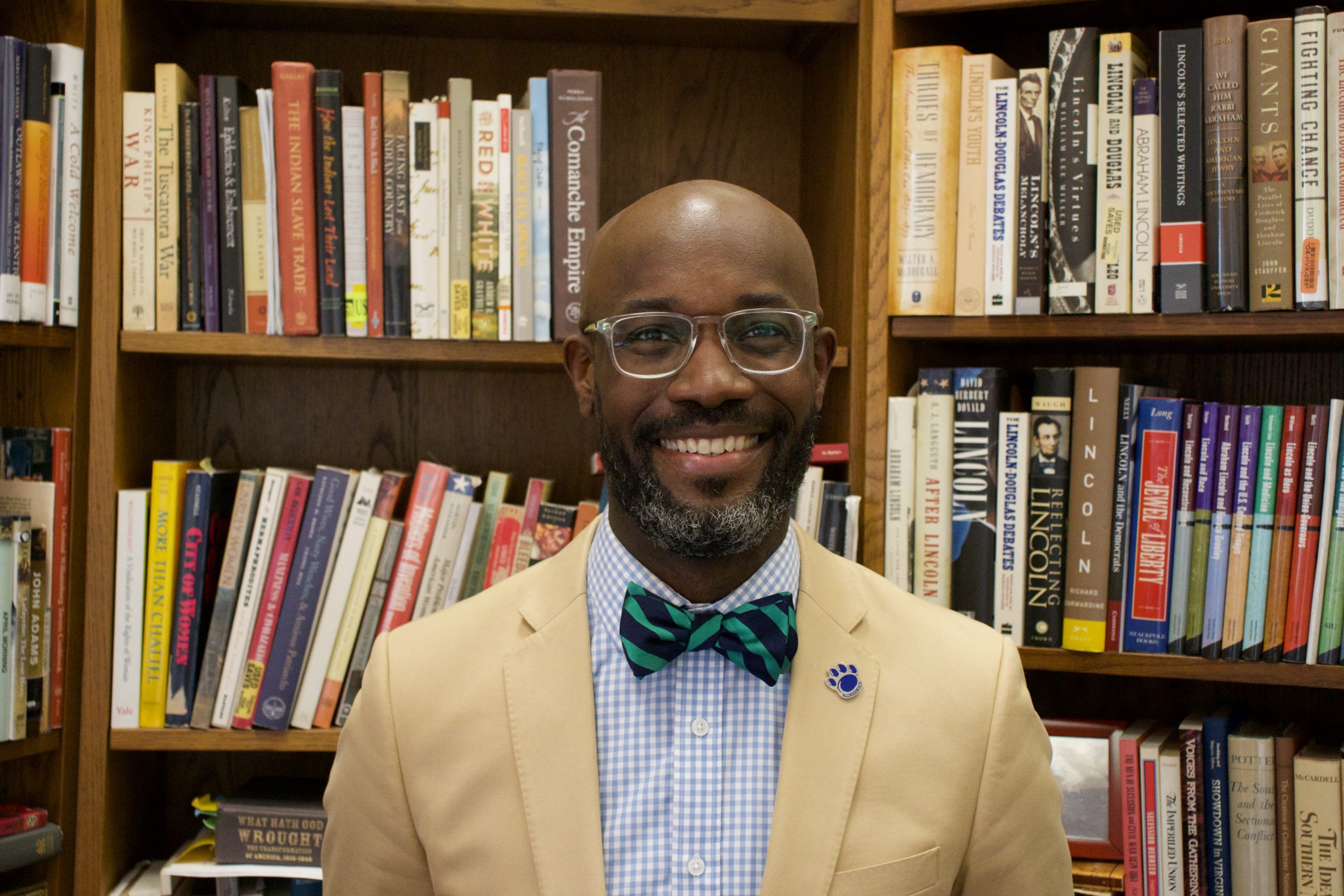 Assistant professor Antwain Hunter will leave Butler to teach at University of North Carolina at Chapel Hill in the fall. Collegian file photo.

Community — the feeling that first drew Dr. Antwain Hunter to Butler is making it that much harder to leave.

Hunter began his role as an assistant professor of history at Butler in 2014 — his first job after finishing his doctorate at Pennsylvania State University. After eight years as a Bulldog, Hunter is leaving to expand his research and teach at the University of North Carolina at Chapel Hill. Hunter announced his decision to leave in the Efroymson Diversity Center newsletter on April 11.

Outside of the classroom, Hunter’s research focuses on enslaved and freed people of color in North Carolina during the Antebellum period. When he was pursuing his doctorate at Penn State, Hunter knew he was interested in American slavery. His dissertation focused on the relationship between slaves, free Black people and firearms in the South. When looking at which Southern state to study, Hunter said North Carolina stood out because of its long colonial history and the lack of attention it gets amongst historians compared to states like Virginia and South Carolina.

While teaching at Butler, Hunter has taken multiple trips to UNC to access their extensive archives. Being on campus full-time next year will give Hunter daily access to documents and resources crucial to furthering his research.

Hunter said he was content at Butler when a friend told him about the job posting at UNC. Since he was not actively searching for a new job, the UNC position was the only one he applied for.

Hunter said leaving Butler was not something he had considered ― going on to say that before accepting the position at UNC, he could have seen himself retiring here.

“This is a great institution and the idea of leaving just to go anywhere, it’s not appealing to me,” Hunter said. “Like UNC and maybe Duke would be the only schools that I could see myself even thinking about it. I bought a house here, all my friends live here. The idea of just packing up and leaving wasn’t something I was thinking about even at the beginning of last year. It wasn’t until this opportunity presented itself that I said I’ll apply and see what happens.”

Hunter said when he told people he was leaving, some asked or assumed that there was a problem. Quite the opposite, Hunter said he had no issues at Butler — UNC was just a unique offer he could not say no to.

“It’s just this opportunity is different,” Hunter said. “And you can’t get that, even Harvard can’t give me the opportunity UNC can give me because I work on North Carolina.”

Hunter said he struggled when he got the offer. With all of his friends here, a new house and a community of students and co-workers, the decision took a lot of consideration.

“I mean, literally up until, like, the day that I committed to UNC I think was like the last day that I could do it,” Hunter said. “I mean, it really was like an agonizing decision.”

At UNC, Hunter will be teaching courses mostly on slavery in the Americas. One of the courses he will teach is an undergraduate research course, working with history majors who are producing 20 to 25 page research papers. Hunter said he is excited to take students to the archives at the library on campus.

Since UNC is a larger university, Hunter has the opportunity to teach more specific and in-depth courses whereas at Butler he teaches a wide range of topics.

“If you have like four or five different slavery courses you teach, you can really boil it down to like a course that’s just on slavery in the family or just on slavery and resistance …,” Hunter said. “I can also do local courses. I can teach a course on North Carolina slavery to North Carolinians, some of whose ancestors were slaves in North Carolina or people who live in the communities that we are talking about. I love that idea too.”

Jay Howard, dean of the college of liberal arts and sciences, hired Hunter and has watched him make a positive impact on students’ lives throughout the years.

“He has lived up to our highest expectations,” Howard said. “As any student who’s been in a course with Dr. Hunter will tell you is that he is a fabulous classroom instructor, that he brings history alive and engages students, and makes them excited to be in the courses that he is teaching. And that’s not just the history majors, that’s any student that is in his courses. He has a tremendous way of being able to connect with students.”

During his time at Butler, Hunter was a faculty in residence for three years, served on the Faculty Senate, co-chaired the BUPD review board and was a member of various other committees. This year, he assumed the position of faculty fellow for the Diversity Center.

After Hunter made his decision to leave, he first told his advisees and a few other students and alumni about the move to UNC, but chose the Diversity Center newsletter to make his first public announcement.

Hunter said the DC is an important place on campus where students who are part of a minority demographic can communicate and build a community with other people facing similar challenges. Hunter said when he attended Westfield State University — a predominantly white institution — for his undergraduate degree, they had student organizations, but nothing as robust as the DC.

Howard said every faculty member has three components to their job — teaching, service and scholarship. Service includes aspects such as committee work, academic advising and working with student groups. Howard said Hunter excelled at integrating service into his role.

“As is often true with faculty members of color, students of color seek them out, you know, looking for mentors, looking for guidance, looking for someone who understands their experience as students of color at a predominantly white institution,” Howard said. “So Dr. Hunter, again, rose to the challenge in that regard, and has been a wonderful mentor to scores of students at Butler.”

Hunter said the Butler community is something that has stood out to him since the first time he visited campus. During his candidate visit, before he was offered the position, Hunter was able to meet and talk with students. Professors from departments across the university came by to introduce themselves and say hello.

“At a lot of places, people are doing other stuff,” Hunter said. “And this has nothing to do with their work, but they’re interested because it’s someone who’s gonna be joining the community. That struck me … from the time I was interviewing.”

Hunter said the students, faculty, staff and administration are all a part of what makes the Butler community so special.

Megan Heiss, a sophomore middle/secondary social studies education major, had Hunter for two back-to-back classes this semester. Naming Hunter as her favorite professor, Heiss said she is sad to see him leave and wishes she had the opportunity to continue learning from him.

“I’m so ecstatic that he gets to pursue his passions further, and like an area where that is relevant to his passion,” Heiss said. “So I don’t want to be selfish and have him stay to hold [him back] from following his dream. And I know he’s gonna learn so much more and do so much hands-on and get to see North Carolina, like, what his concentration is all about. So I’m very proud of him for pursuing his dreams.”

According to Howard, a one-year visiting faculty member has been hired to temporarily fill Hunter’s spot. Looking towards the future, however, Howard said he plans to begin the search for a permanent replacement in the next hiring cycle towards the end of summer.

Hunter will teach his last Butler course this summer, a GHS course titled “Freedom and Movement” that he helped build with three of his co-workers.

As he makes plans to move south and start this next chapter, Hunter said leaving Butler, where his professional career began, is bittersweet.