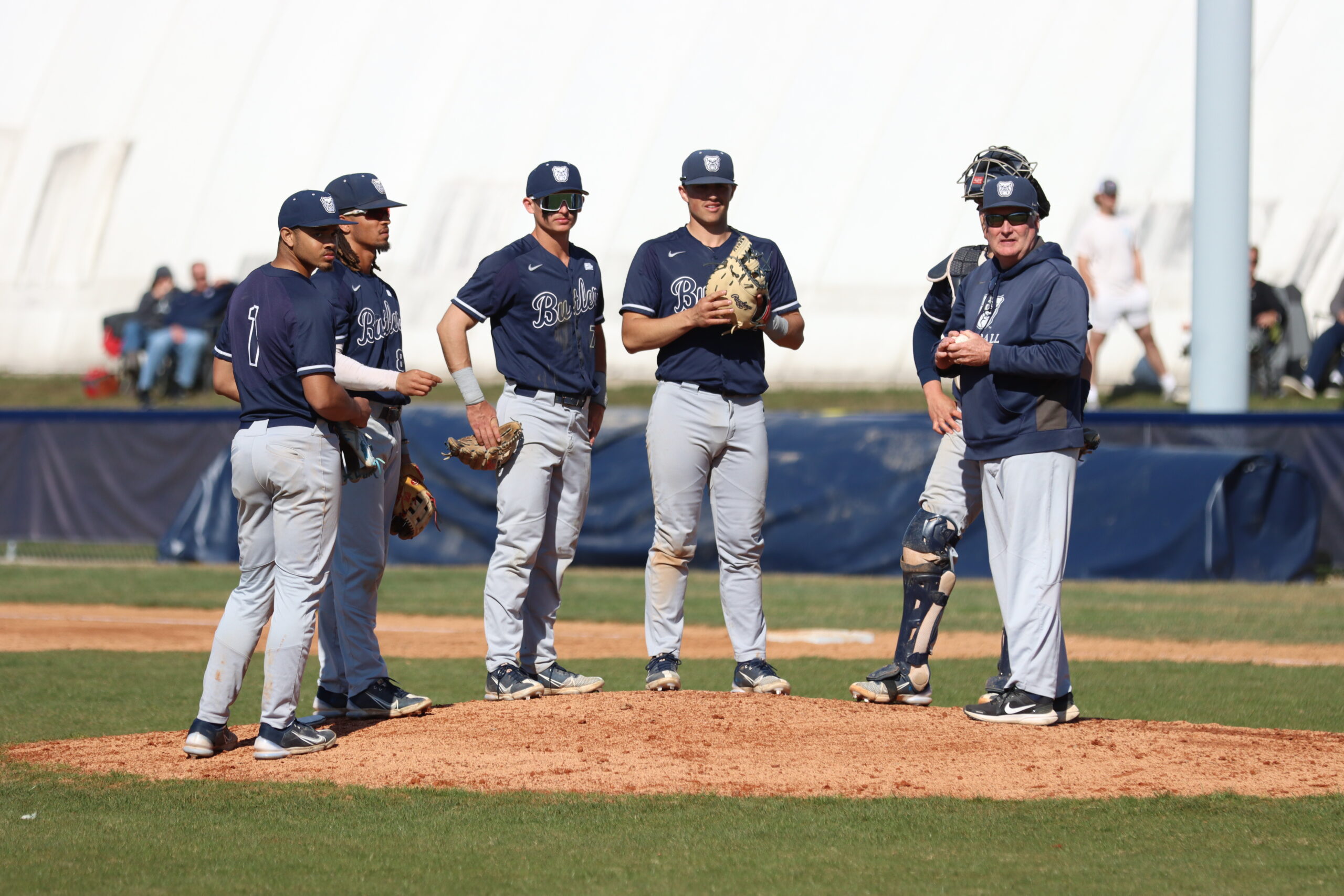 The infield of the Butler baseball team meets on the mound during a matchup against the Eastern Michigan Eagles on March 20. The program recruited 12 freshman for their 2021-22 season. Photo by Francie Wilson.

‘Welcome to the Team’ is a Q&A series where the Collegian sits down with first-year student-athletes who are entering their first season at Butler University. These articles will address why they chose Butler, what they hope to get out of their first season, and some personal tidbits that you won’t find anywhere else.

Jaylon Nauden is a 6-foot-1 middle-infielder from Olympia Falls, Illinois. Nauden is a entrepreneurship and innovation major. Photo by Francie Wilson.

Andrew Mild: What made you want to come to Butler?

Jaylon Nauden: “The coaches showed genuine interest when recruiting me. They made me feel welcomed and I knew it was a place where I could develop. It is also a great school to get an education from and it’s not too far from home.”

AM: Who is your favorite baseball player?

JN: “I would have to say Tim Anderson. I love the way he plays and the style he brings to the game. I see a lot of myself in him. I’m also a White Sox fan, so him being my favorite player and the shortstop for my favorite team is a win-win.”

AM: What kind of toppings do you put on your pizza?

JN: “Sausage. Nothing more, nothing less. I can deal with pepperonis sometimes, but sausage will always be my go to.”

AM: What’s your favorite position?

JN: “Shortstop is my favorite position. I grew up playing shortstop a lot. Shortstop allows me to show off my athleticism and be more of a leader in the infield. I also feel that being able to play shortstop shows that you are capable of playing other positions like second base or third base.”

AM: How has your college experience been so far?

JN: “It has been great, I really have been enjoying it. I’ve met a lot of new people and made a lot of new friends during my time here. It is challenging being a student-athlete. Balancing baseball and academics can get stressful at times especially during the season, but it is definitely something that I’m able to accomplish.”

AM: Who was your favorite pitcher growing up?

Luke Zmolik: “My favorite pitcher growing up was Yu Darvish. I always loved watching how hard he could throw the ball while also making it move a ton.”

AM: What is your favorite part about Butler?

LZ: “My favorite part about Butler would be meeting all the new people from all kinds of different areas.”

AM: What’s a song you have to listen to before you pitch?

LZ: “A song I have to listen to before I pitch is ‘Hey There Delilah.’ I’m not really sure why, but I’ve just loved this song ever since I was little so it makes me relaxed.”

AM: What’s some goals you have for yourself this year?

LZ: “The goal that I have for this year is to be competitive when I pitch and throw strikes. I also want our team to take home the Big East championship.”

AM: Is a hot dog a sandwich? Why or why not?

LZ: “I think that you can consider a hot dog being a sandwich because it has meat between two buns.”

Quentin Markle is a 5-foot-8 utility player from Westfield, Indiana. Markle is a marketing major. Photo by Francie Wilson.

AM: Do you like going to a college that’s close to home?

Quentin Markle: “I really enjoy being close to home because I love seeing my dog, Scooter and going home for a home cooked meal every now and then.”

AM: Who is your role model?

QM: “My role model is definitely my dad because he embodies what it means to be a great father, never getting too high or too low in situations, while always supporting me.”

AM: Who did you pick for the March Madness tournament?

QM: “I picked Gonzaga to win it all because I think they are due and Chet Holmgren is cold.”

AM:  Biggest difference between high school and college baseball?

QM: “The biggest difference between high school and college baseball is definitely the speed of the game. Another thing is the attention to detail and how good every team is at the fundamentals.”

AM:  Who has the most swag on the team and why?

QM: “It’s close, but I think Aaron Barokas has the most swag on the team. Even when it’s just team breakfast he always shows up in something fresh.”