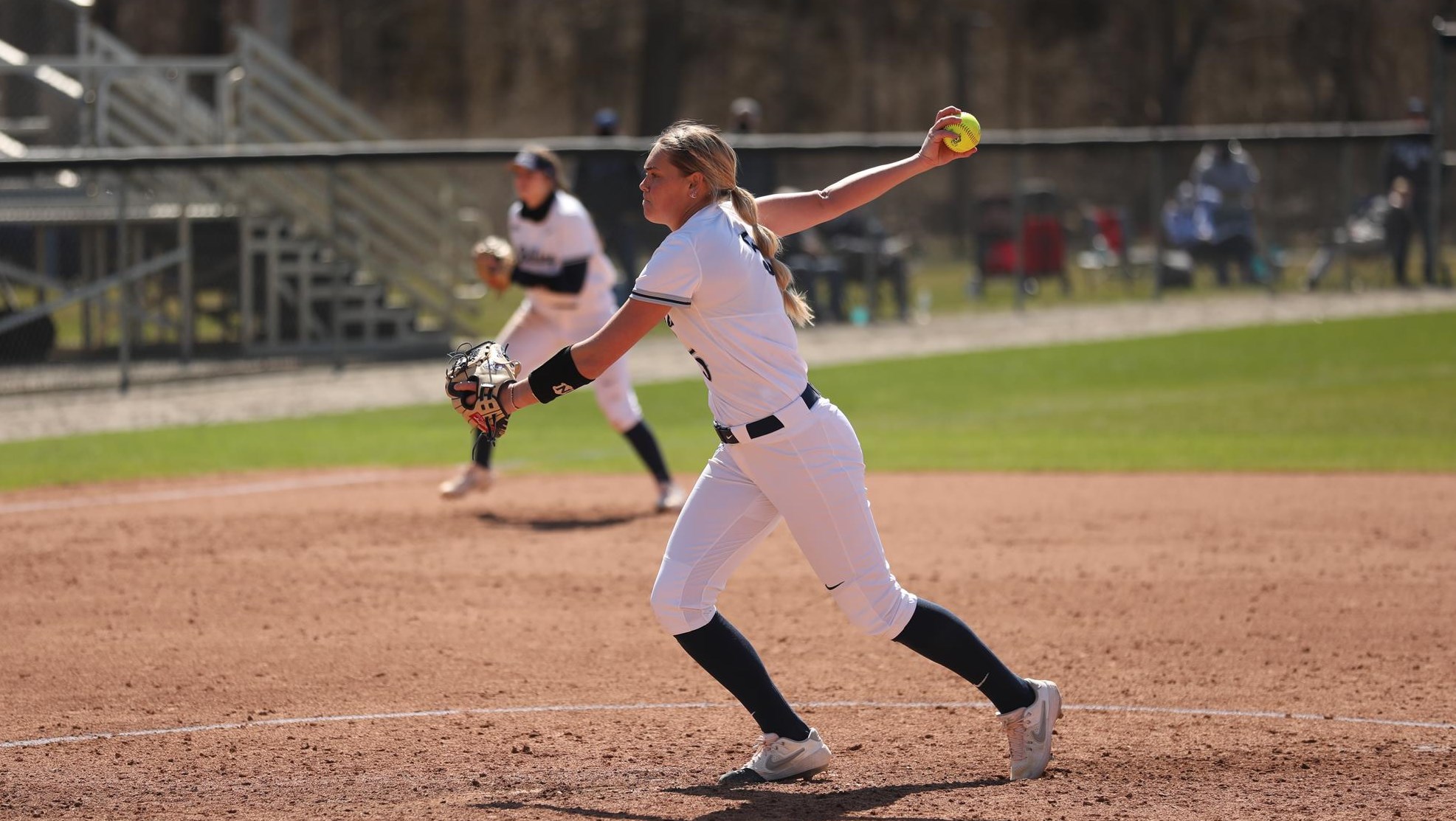 Senior pitcher Karli Ricketts winds up to throw a pitch during the 2021 season. This season, Ricketts is currently leading the Big East in ERA with a 2.28. Photo courtesy of Butler Athletics.

After three years of consistent production and improvement, senior pitcher Karli Ricketts is ready for her final season to be her best. Since becoming a Bulldog in 2018, Ricketts has started in all but one game the team has played.

Ricketts’ versatility as a player has allowed her to be a solid contributor for the Bulldogs in every game she played in — including some games where she did not even pitch. Butler pitching coach Stacey Goyette said that Ricketts’ drive and work ethic allows her to be a dynamic player both offensively and defensively.

“Her competitive nature allows her to go out there and compete with the best of them,” Goyette said. “She’s been able to hone her craft both at the circle and the plate which makes her a complete all around ball player.”

Goyette argues, however, that Ricketts’ biggest contribution to the team may not even have anything to do with her skills on the field.

Ricketts’ production reached new heights in her junior year, when she was named to the All-Big East First Team at the end of the year along with teammate Lauren Fey. While the award was impactful for her, Ricketts has her sights set on more than personal accolades this season.

“Personally, I don’t really have any goals for this season, but I think our team is so good that we are more than capable of winning the Big East,” Ricketts said. “We all believe that we can be the top seed of the conference when the tournament comes and that’s what we’re all working towards. I think that would be amazing for us because last year we kind of got in by default but this year we really think we can prove everyone wrong.”

Ricketts believes that if the team achieves their goal, her personal success will come along with it.

“If I get named to the All-Big East team again, that would be great,” Ricketts said. “But if it happens, it happens. If it doesn’t, then it doesn’t. I think the goals for the team are a lot more [important] to me.”

Despite all her success, Ricketts enters the 2022 season with a new challenge to overcome. Ricketts is recovering from a back injury that has severely hampered her range of motion — especially when it comes to hitting.

Ricketts has not been able to hit much this season as she recovers from her injury, but has been able to return to her normal pitching form.

“The coaches do not want me hitting yet because they fear I may mix up the motions with pitching and hitting as I recover, so I’ve been in a little bit of a slump,” Ricketts said. “I do love hitting because rattling off a big hit every once in a while gives me a big surge of adrenaline, but I’m way more consistent as a pitcher. I would love to return to hitting consistently again, but if it doesn’t happen, at least I know I’m helping the team with my pitching.”

Kinley Longest, senior infielder and Ricketts’ roommate, has always noticed Ricketts’ positive attitude towards softball and life in general, even through her occasional slumps.

“No matter what is going on in the game, she just likes to have fun on the field,” Longest said. “That has always helped her relax and be a great softball player. Whenever she has a rough game, she just takes a few minutes for herself and really is just able to leave it all behind her.”

Longest, who met Ricketts during their official visits, was also Ricketts’ roommate during their freshman year. From day one, Longest and Ricketts were fast friends.

“We’ve always gotten along really well since day one,” Longest said. “When we’re not playing softball, we just enjoy doing a lot of typical college activities together. We love to go out to eat, go to other Butler sporting events, shop or whatever else comes up.”

Ricketts’ ability to connect with her teammates has allowed her to also become a better leader. Goyette added that Ricketts has been able to lead and collaborate with the team regardless of their own personal performance. The bullpen, along with the entire team, is able to play off each other’s strengths and weaknesses to work together and not against each other.

As her collegiate softball career comes to a close, Ricketts feels both excited and nervous for her next step. Ricketts will be receiving her bachelor’s degree in marketing from Butler in May.

After over 15 years of playing competitive softball, Ricketts knows leaving the game she loves will be tough.

“I started getting serious about softball when I was about 10 years old and my parents saw enough potential in me to ask if I had ever thought about playing in college,” Ricketts said. “I remember thinking like, ‘Wow, I’m only 10 and already thinking about college.’ Ever since then softball has been basically a lifestyle for me.”

Despite knowing that leaving softball will be a difficult transition, Ricketts knows a big part of her decision to choose Butler was her confidence in the university preparing her for life beyond athletics.

“I chose Butler since it was so close to home for me, and I loved coach Hall during my visit,” Ricketts said. “But I also know how great all the majors are here as well. There’s no bad major at Butler, so if you have a degree from this university it’s pretty credible. I just thought it was a good fit because it’s a great school with small class sizes and a reputable softball program.”

Despite the obvious hurdles for Ricketts in her final season, the confident and inspiring leader has already been named Big East Pitcher of the Week once this season and has Butler currently one game back for first place in the conference.