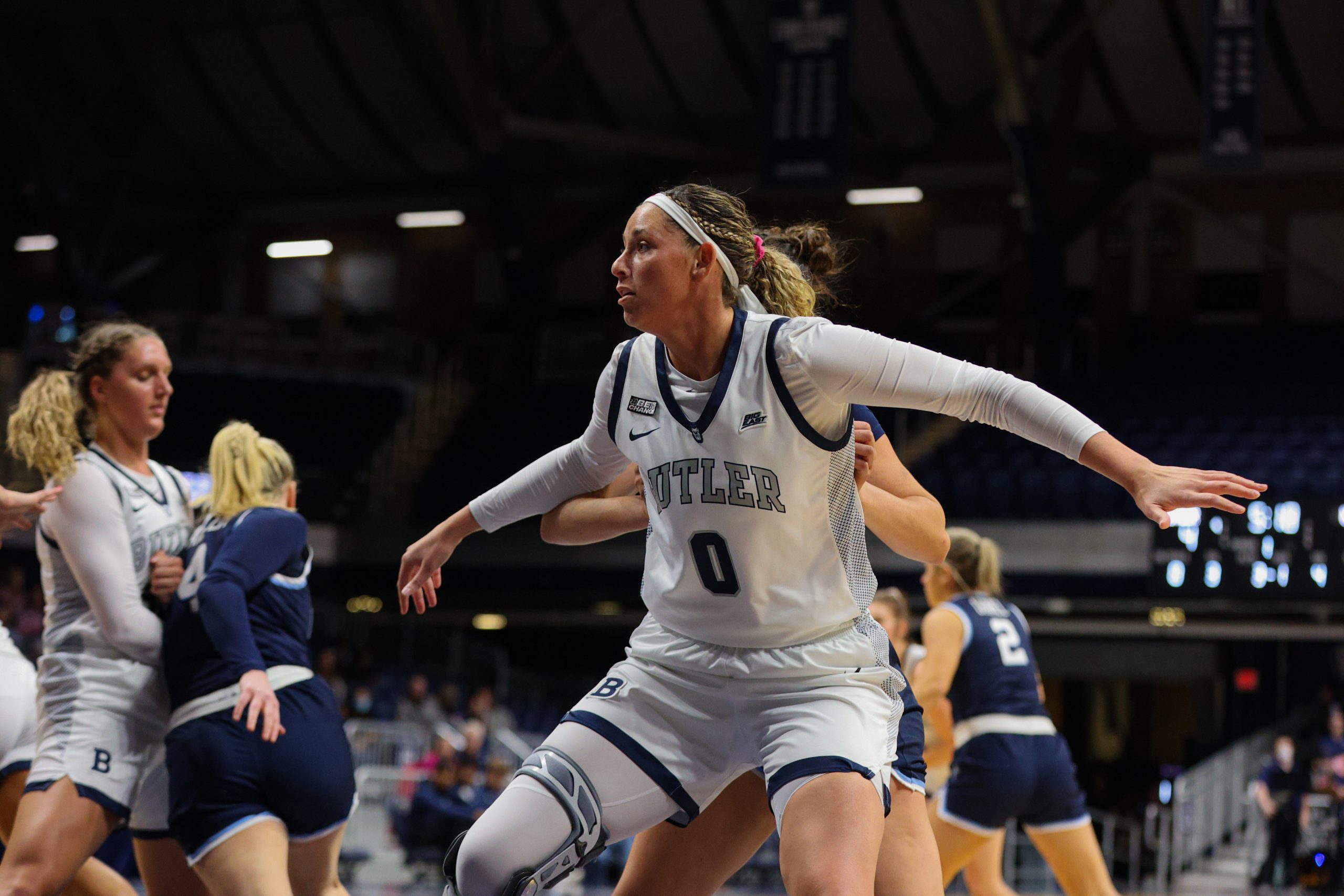 Taborn boxes out an opponent against Villanova on Feb. 25. She ended the game with 12 points. Photo by Claire Runkel.

Butler women’s basketball team finished the regular season with a 1-26 record, yet Celena Taborn has found a way to bring out the best in herself as well as her teammates. Taborn, a graduate student forward, has maintained her position atop the country in field goal percentage at 68.78% as the regular season concluded this past weekend.

Taborn is no stranger to the position, as she once held it during her undergraduate career at Furman University. She used her past experience to help her continue to maintain her efficiency.

“When I was younger, I didn’t really know what to do [to continue to be efficient],” Taborn said. “Now, I just focus on what I can do finishing around the basket and just being efficient on the court and that’ll take care of itself.”

Head coach Kurt Godlevske acknowledged that Taborn’s accomplishments have offered some relief to a tough season.

“It’s nice, especially with the type of year that we’ve had with the injuries to our perimeter players,” Godlevske said. “I think it’s cool, as a coach for 20 some years, I’ve not been around somebody that’s finished at such a high percentage that she has and to be in that position across the whole entire country, I think is outstanding.”

Taborn’s story begins much earlier, as a child her decision to first pick up a basketball was a no- brainer. Not only was Taborn taller than everyone else, but all eight members of her family — three older brothers, two younger brothers and parents — share the same passion for basketball.

At Sidney High School in Sidney, Ohio, Taborn was unstoppable — averaging 26 points, 13 rebounds and four blocks as a senior. Prior to Butler, Taborn played at Furman University where she averaged 10.4 points over four years. Taborn then used her extra year of eligibility to transfer to Butler for her final collegiate season. Out of all the opportunities presented to Taborn, Butler offered her more than just another season of basketball.

“What brought me to Butler was being two hours away from home and having my family finally be able to come see me play,” Taborn said. “Then the master’s in one year. A lot of other schools had two-year programs so being able to get my master’s was important.”

Godlevske was drawn to Taborn because her interior presence was seen as a crucial piece to the style of basketball that he wanted to play this season.

“We watched a lot of her game film and her knowledge of positioning, how to put herself in position to score, how to seal people, I was very impressed with,” Godlevske said. “With the style that we wanted to play before she got here was to be able to spread people out and throw the ball inside a bunch and we needed that.”

In just one season at Butler, Taborn has had an instant impact on and off the floor. Taborn has had her best collegiate season averaging 13.3 points. Despite being a one-year transfer and having to build relationships in a new program, Taborn has been a vocal leader for a young core of players. Freshman forward Alex Richard has taken the opportunity to learn from Taborn as an older player playing in a similar position.

“She’s a fifth-year, so she’s very knowledgeable when it comes to basketball and she sees the court differently than I do as a freshman,” Richard said. “We’re not the same players, but she really helps me with my body positioning and what kind of shots to take.”

Coming into the year, Taborn had a goal to focus on herself in order to maintain a positive spirit, but she wanted to make certain that this goal wouldn’t distract her from helping her teammates. Richard added that not only is Taborn willing to help with anything, but she’s also a crucial part of the locker room atmosphere, keeping a positive attitude regardless of the team’s record.

“It’s really easy to get down when you’re losing, especially since a lot of us haven’t ever experienced losing seasons like this,” Richard said. “She really keeps it upbeat, and looks at the positive things. She’ll be like, ‘No, no, don’t get down on yourself!’”

For Taborn, being a vocal presence amongst her teammates has been a part of her identity — even when the chips have been down.

“I’ve always been a voice since being a freshman,” Taborn said. “I’m just used to being a leader in general … So I’ll just lead. We’ll just play hard, [and] at the end of the day play for [our] team. Then it will take care of itself.”

Though a bad hand was dealt to her in her final season, Taborn hopes that she taught her teammates one important lesson, not only in basketball — but in life.

“Stay true to your values,” Taborn said. “Don’t let nothing take away from who you are as a person, who you are as a player. And at the end of the day no matter the situation you are in, go in fighting and never give up.”

Following her season at Butler, Taborn wants to continue playing basketball overseas. Then after her basketball career, Taborn plans to combine her passion for children with her education to create her own daycare.

“I’m going to change the perception that daycares have,” Taborn said. “I’ll work with special needs [children], because special needs have a special place in my heart.”

For now, Taborn and her teammates will focus on the next task at hand. The Bulldogs will travel to Uncasville, Connecticut to take on six-seed Seton Hall in the first round of the 2022 Women’s Big East tournament on Friday, March 4 at 4 p.m.