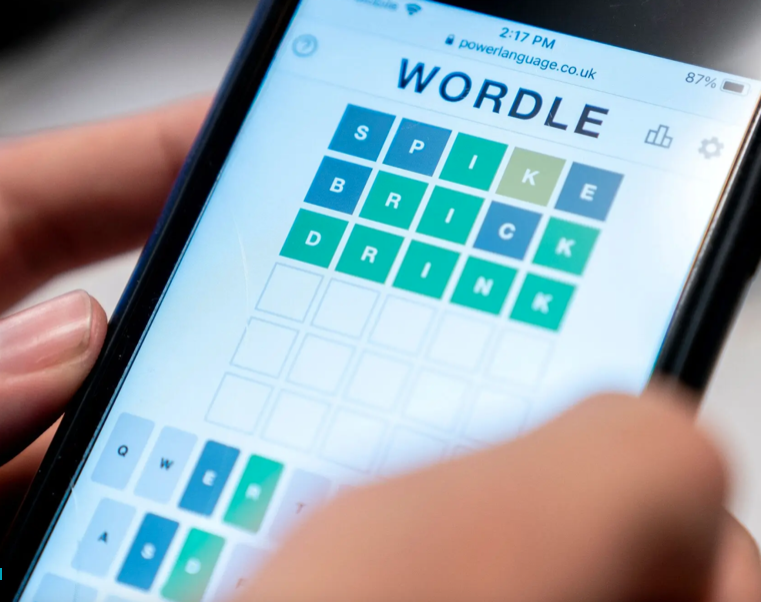 Very few cultural trends retain the “watercooler effect” — an air of popularity that inspires consistent conversation regarding a piece of entertainment. In the short months since its mainstream rise to popularity, it seems that in a whirlwind of word games and deductive reasoning, Wordle has done it.

Wordle is a six-try, five-letter guessing game modeled after digital word games such as Spelling Bee and longtime board game staples such as Mastermind. Created by Josh Wardle for his partner, the sheer force of word of mouth referral and social media sharing led to the site’s exponential growth after it was opened to the public in October of 2021.

Unique qualities of Wordle are its accessibility, limited exclusivity and opportunity for users’ bragging rights. The green, yellow and black emoji squares — placeholders for the users’ guesses when they share their results — that may have terrorized social media timelines in recent months are easily identifiable and inherently spoiler-free. The game’s daily solution is preserved while players share subjective progress with one another, encouraging general competition and good willed congratulations.

Meghan Fitzpatrick, a sophomore arts administration major, said that Wordle has helped unite the people around her.

“I have five roommates, and at midnight, every night, we’re all doing the Wordle,” Fitzpatrick said. “We send it in our group chat to see who got it the fastest and who got it in the least amount of tries. I just think that it’s something you can do together, just a little bit competitive in a way, but it can also just be a fun kind of bonding.”

The game has drawn comparisons to Candy Crush, a relic of a digital age long past that rose to popularity as quickly as Wordle has. Relegated to the archives of 2014 nostalgia, games such as Candy Crush produced high number of users but limited both long-term impact within the popular cultural arena and competitive engagement between players.

Wordle also differs from other word games in its ability to force its players to slow down. Deductive reasoning has a variety of benefits, and digital trends that promote analytical thinking and thoughtful discussion seem few and far between.

Sarah Norris, a junior pharmacy student, appreciates the longevity of deductive reasoning games and how Wordle pays its respects to those that came before it such as Mastermind.

“My family, we played Mastermind pretty much my whole life, and it was a really fun game because it was super simple,” Norris said. “A few weeks ago my roommate kept talking about Wordle, and just hearing her explaining it as something new, I was like, ‘Oh, that already exists. That’s a thing.’ I guess it’s cool, getting an update on that concept of deductive reasoning, but it isn’t a new concept.”

Another aspect of Wordle’s rise to fame that seems nearly unquantifiable is the intergenerational expanse it has crossed. The universality of word games when paired with a direct results to social media page pipeline presents something for everyone.

Langford Lessenberry, a senior music and digital media production double major, was surprised to see that Wordle had reached the faculty here at Butler.

“I’ve seen my teachers playing it, and me and my phonetics teacher talk about it every week,” Lessenberry said. “My clarinet instructor was playing it as I was going into my lesson this week, so I feel like that [fact] kind of cements that [Wordle] is here to stay.”

Players don’t seem to be losing steam any time soon, but the recent seven figure acquisition of the site by the New York Times has made waves across media outlets and social networks. Initial promises by the New York Times include the site remaining free to use with no paywall or ad bumpers, unlike some of the Times’ other word games, but no agreements were reached regarding the future of the site. As the world tunes in, the website making vocabulary cool again doesn’t seem to be going anywhere any time soon.