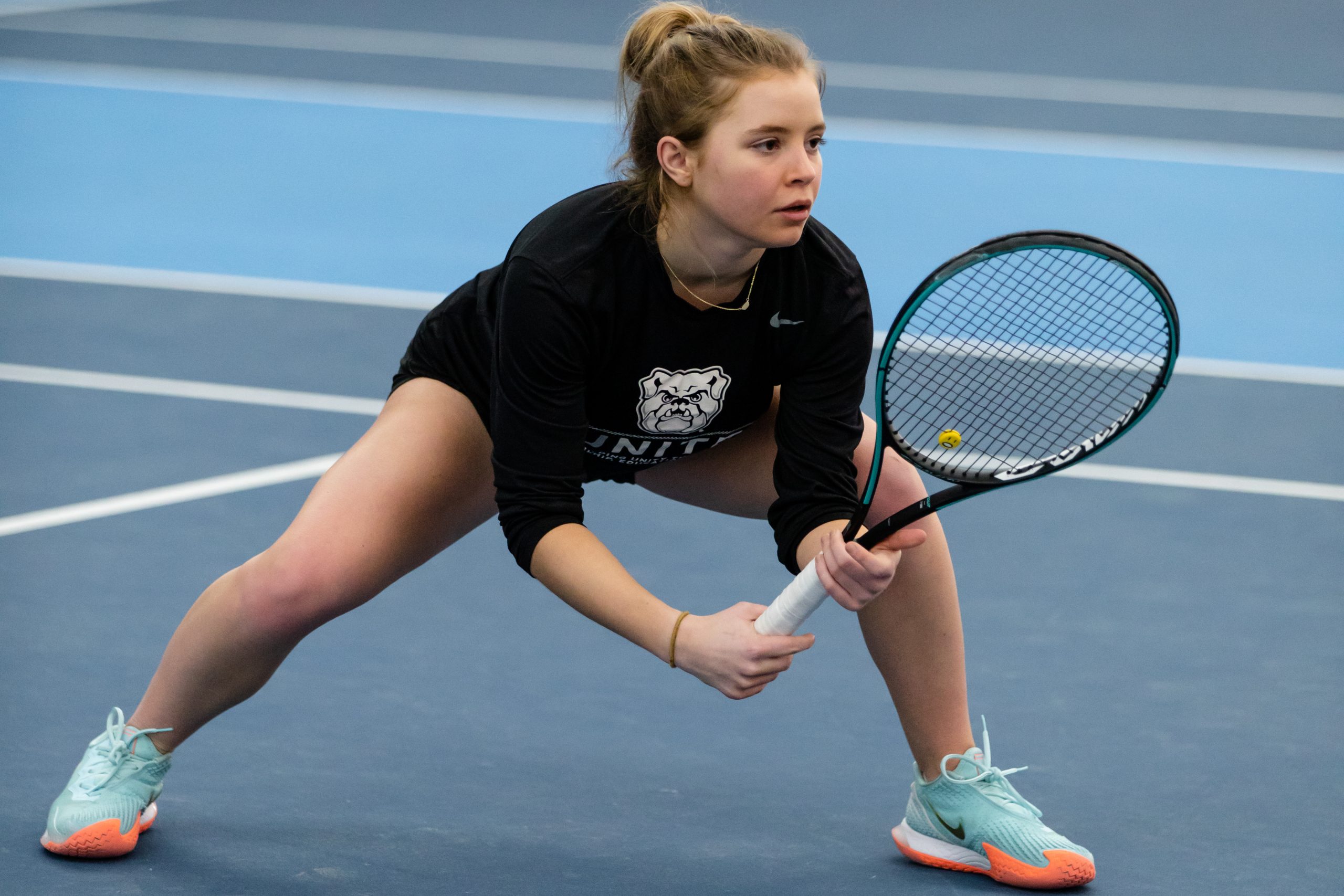 Freshman Katie Beavin gets ready to return a serve during practice in the Butler Tennis Bubble. Beavin is one of five freshman who will be debuting for the Dawgs this season. Photo by Lauren Hough.

Although the Bulldogs have had a slow start to their season after falling to Miami of Ohio in their season opener at home on Jan. 21, the women’s tennis team continues to remain optimistic as the program ushers in a new era of talent on the court.

This year, the Bulldogs have a young team and are working on developing their program and creating good chemistry between the athletes. The team recruited five first-years to elevate the strength of their roster. The first years have already proven themselves capable of playing at the collegiate level during fall invitationals by continuously winning in competitive matchups and are looking eager to make an impact on the court.

Returning this season to Butler’s lineup is sophomore Natalie Boesing. Boesing had a 9-6 record on her freshman season and was honored as the program’s first All-Big East first team selection in nine years of being in the conference. Head coach Mat Iandolo is ready to watch Boesing excel in her craft this season.

“She is our first ever player that was named to the All-Big East first team,” Iandolo said. “Only being a freshman last year and coming back for her sophomore year, I have really high expectations for her.”

Last season the team had a 6-10 record overall and went 1-2 in conference play. Despite having a losing record, the team focused on strengthening their abilities in the offseason to make some noise in the Big East for 2022.

The freshmen are motivated to be a part of Butler’s program and are ready to make a statement this season. One freshman to look out for is Katie Beavin, whose talent is already drawing eyes.

Beavin’s skill level is paving the way for a competitive future for every Bulldog on the team. In the fall, Beavin possessed a winning record in both singles and doubles. All freshmen showed true potential in their fall breakout tournaments.

“For this season, I just want to feel proud of how I did and always try to be better than the person in front of me,” Beavin said. “The people here are all really good, but we are competing against each other while playing for each other at the same time.”

Senior Hallie Leblebijian, is taking on a leadership role for this young team as she enters her final season as a Bulldog. Her goal this season is to simply push herself to be at her best.

“Right now the biggest goal for myself is just getting healthy and back to the state I was in last year,” Leblebijian said. “I want to go out there and compete as hard as I can for myself and the team.”

The 2022 schedule consists of two Big East matchups and 19 non-conference matches. The Bulldogs have a heavy home schedule this year at the Bubble, but they will round out the season with the Big East Tournament from April 21-24 in Cayce, South Carolina.

Iandolo said the team is looking forward to every matchup this season, but especially against DePaul and Xavier since they are the top two teams in the Big East. Out of all the matchups this season, Leblebijian said she is most excited for Marquette.

“Marquette was one of my favorite teams to play last year,” Leblebijian said. “We won 4-3, so if we can go out there and win again, it would be amazing.”

The Bulldogs will take on UW-Milwaukee at home on Saturday, Feb. 5 in the Butler Tennis Bubble.