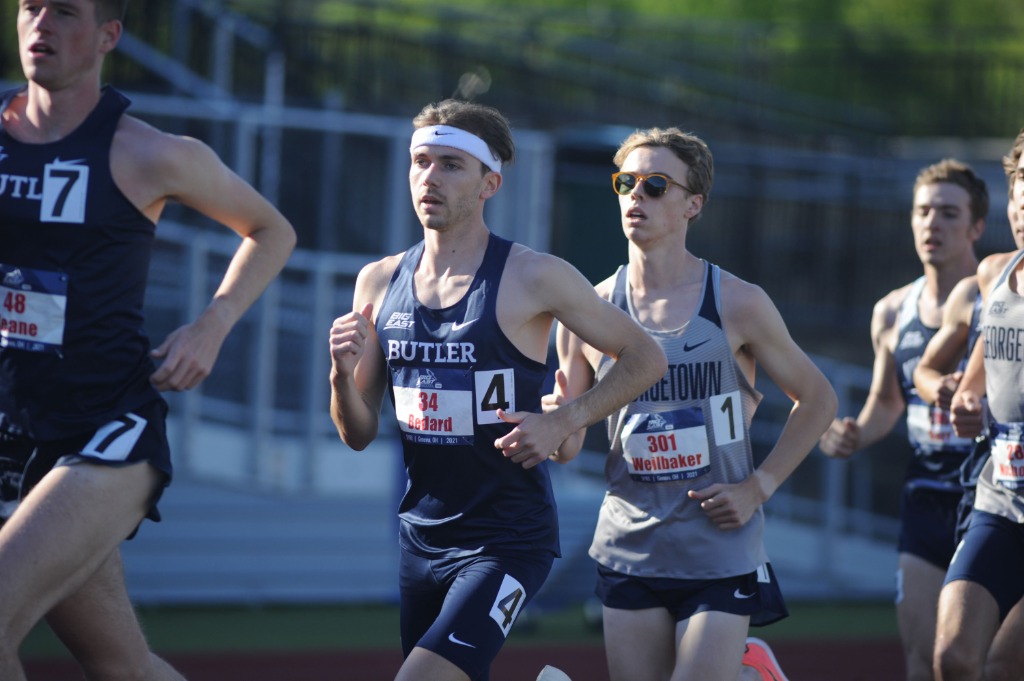 Graduate student Simon Bedard running an event during the Big East Championships on May 14, 2021. Bedard was awarded Big East Men’s Track Athlete of the Week on Feb. 17 following his performance at the David Hemery Invitational on Feb. 12. Photo courtesy of Butler Athletics.

This weekend, the Butler track and field team competed with a split-squad in preparation for the Big East Indoor Championships.

Prior to the weekend of events, Graduate student Simon Bedard was awarded Big East Men’s Track Athlete of the Week on Feb. 17 after his performance last Saturday at the David Hemery Invitational.

Bedard ran a time of 7:51.52 in the 3000 meters, placing him 12th in the elite field and first in the Big East conference this season. This was the third time a Bulldog was named to the Big East weekly honors following graduate student Barry Keane and freshman Paul Signorelli on Dec. 14.

Fast forward to Friday, Feb. 18, where the first squad raced at the Illini Classic in Urbana-Champaign, Illinois. Butler finished first in two events including sophomore Zac Stanley in the men’s long jump with a leap of 6.89 meters and freshman Elsa Rusthoven in the women’s 3000 meters with a time of 10:08.59.

Also placing high on the podium for the Bulldogs were junior Erin Haugh in second at 1:00.66 and sophomore Reagan Kelly in third at 1:02.48 in the 400 meter dash. Senior Nina Hilt added on, placing third in the 60 meter hurdles with a time of 8.99 seconds.

Senior Andrew Taylor and junior Nick Doud finished as Butler’s last top competitors, taking second and third with times of 8:30.84 and 8:35.30 in the men’s 3000 meters.

The next day the other part of the Butler squad stayed in Indiana to compete at the Alex Wilson Invitational in South Bend.

A pair of Bulldogs placed third in the sprints at the meet. Graduate student Tom Pitkin crossed the line at 47.57 in the men’s 400 meter dash, while graduate student Rebecca Collester posted a 25.02 mark in the women’s 200 meters.

Butler’s next race will travel to Chicago, Illinois for the Big East Indoor Championships from Friday, Feb. 25 to Saturday, Feb. 26.