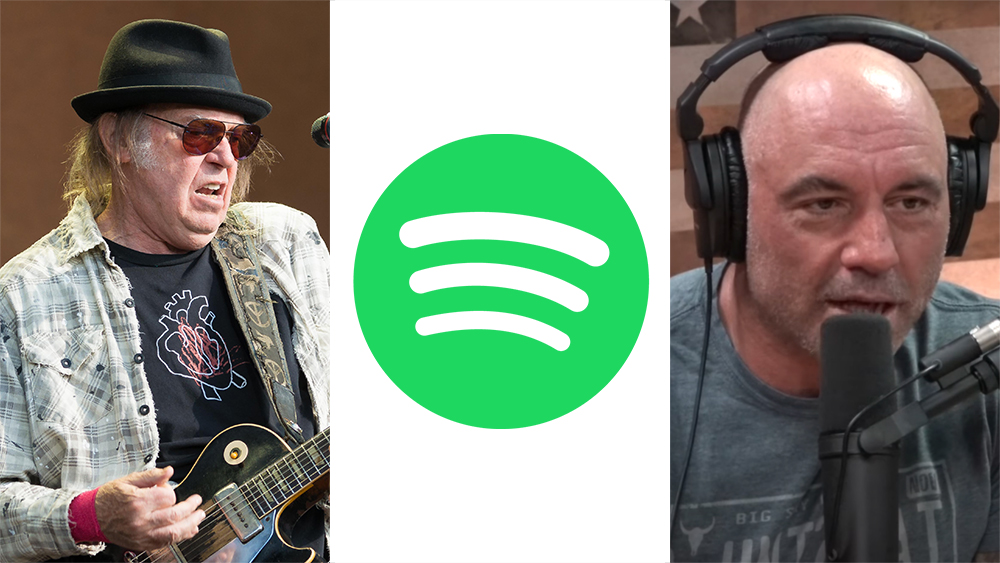 Spotify is in treble. Photo courtesy of Deadline.

If you are a fan of classic rock or folk music, and you opened Spotify recently to stream “Harvest Moon” or “Big Yellow Taxi,” you were in for some bad news. Following a controversial episode of the “The Joe Rogan Experience” — a podcast exclusive to Spotify hosted by ex-“Fear Factor” emcee Joe Rogan — legendary singer-songwriters Neil Young and Joni Mitchell removed the bulk of their music catalog from the streaming service.

They both cited the danger of Rogan’s spreading and platforming of COVID-19 misinformation as their reason for pulling their music off of the platform.

In the time since, public statements have been made by Rogan, Spotify CEO Daniel Ek and several other musicians and podcasters. Here’s a rundown of the controversy.

In 2020, Rogan made a licensing deal with Spotify worth more than $100 million that gave the streaming giant exclusive rights to his popular podcast “The Joe Rogan Experience.” New episodes of the show began premiering exclusively on the platform in September, and by the end of the year, Spotify was the only place fans could listen to any full episode in the podcast’s 13-year back catalog.

“The Joe Rogan Experience” soon proved to be immensely popular for Spotify, becoming their top podcast globally in 2021 and drawing in an estimated 11 million listeners per episode. However, the podcast also often lands Rogan and his guests in hot water with the general public.

In 2018, Tesla CEO Elon Musk appeared as a guest and smoked weed marijuana on air, a move that led to a 9% drop in Tesla stock. Additionally, Canadian pop psychologist and provocateur Jordan Peterson peddled climate change-denying rhetoric on a Jan. 25 recent episode, much to the chagrin of actual climate scientists.

On New Year’s Eve 2021, Rogan had as a guest on his show Dr. Robert Malone. Malone, who was once an mRNA vaccine researcher, has recently become a popular figure in somewhat of an idol the anti-vax community for his baseless claims that the vaccine can lead to irreparable organ damage in children and that vaccinated people pose more of a threat than unvaccinated people, among others. On the episode of Rogan’s podcast, Malone continued to spout provably false claims, notably saying there has been a recent boom in vaccine-related deaths. In the most controversial segment of the episode, Malone even compared the United States’ COVID-19 policies to Nazi Germany.

Malone’s words drew widespread outrage, especially from the scientific community. An open letter published on Jan. 12, signed by 270 doctors, laid out Rogan’s history of platforming coronavirus misinformation on his podcast and called for Spotify to “take action against the mass-misinformation events which continue to occur on its platform.” The letter decried Spotify’s lack of any sort of misinformation policy and claimed that Spotify — through its deal with Rogan — “is enabling its hosted media to damage public trust in scientific research.”

On Jan. 24, a week and a half after the publication of the open letter, famed rock musician Neil Young posted to his website a now-deleted message expressing his desire to remove his music from Spotify as a protest of Rogan’s spread of misinformation.

“I am actively canceling all my music availability on Spotify as soon as possible,” Young said in the letter. “I am doing this because Spotify is spreading false information about vaccines — potentially causing death to those who believe the disinformation being spread by them … They can have Rogan or Young. Not both.”

Young proved that he was not bluffing when the vast majority of his 50-year catalog disappeared from Spotify two days later, a move that was accompanied by another message similar to Young’s first.

Cutler Armstrong, lecturer for the Eugene S. Pulliam School of Journalism and Creative Media, said it is important to note that Young was not able to personally remove his music from Spotify, but rather had to convince his label to do so.

“There’s the songs that Neil Young wrote, but they’re controlled by his music publisher that he signed with,” Armstrong said. “So Warner happened to agree with his stance or they’re willing to support him, but they didn’t have to pull their recording off there unless they wanted to.”

Two days after that, folk legend Joni Mitchell expressed her support of Young’s position in a short open letter of her own. On the same day, the bulk of her acclaimed catalog was removed from Spotify as well.

While saddening some fans who will miss being able to stream Young and Mitchell’s work via Spotify, many support their decision to take a stand on a controversial issue. Andrew Krivsky, senior international business and marketing major, acknowledges that it is well within an artist’s right to express their opinion in this way.

“If there’s a part of a company like Spotify’s product that an artist is not okay with, and they’re actively putting their art on that product, they should be allowed to say something,” Krivsky said. “And if the company doesn’t do anything about it, then they have every right to pull their music from it.”

On Jan. 30, around a week after Young’s first message, the CEO of Spotify Daniel Ek posted a letter outlining the platform’s rules regarding content monitoring and introduced a new advisory posted on any podcast episode that discusses COVID-19. The advisory leads users to the company’s official COVID-19 guide, where they can access credible information about the pandemic.

On the same day, Rogan took to Instagram, where he posted a 10-minute video response to the whole situation. In the video, Rogan expressed his mission for his podcast and said he does not try to solely be a controversial figure. He also vowed to balance out perspectives on his show and talk to a wider range of experts on any particular issue.

A few days later, Ek doubled down on Spotify’s deal with Rogan in a company town hall. He reiterated that their exclusive deal does not equate to a total endorsement of all of Rogan’s values and told employees, “If we want even a shot at achieving our bold ambitions, it will mean having content on Spotify that many of us may not be proud to be associated with.”

While some may see this as a step in the right direction for Spotify, others like Krivsky do not believe Spotify acted quick enough in their response.

“Controlling misinformation is good, but all of that is reactive,” Krivsky said. “How is Spotify going to react when a huge artist goes against them? It would be better if they were just proactive to the point where that doesn’t happen.”

Several other notable artists and podcasters have also fully removed or expressed their desire to remove their work off of Spotify in the wake of the Rogan controversy. Crosby, Stills, and Nash have backed former bandmate Young in his decision and said they want their music removed as well, though at this time their catalog remains on the service.

Writer and professor Roxane Gay recently wrote a column in the New York Times outlining why she decided to pull her podcast from Spotify, stating that the streaming service isn’t doing enough to cull “misinformation that has helped prolong the [COVID-19] pandemic and encouraged people to do dangerous things.”

Furthermore, Grammy award winning singer-songwriter India Arie has asked her label for her music to be pulled as well. She said in an Instagram video that she empathizes with those upset with Rogan’s spreading of misinformation but cites her decision as being based instead on his frequent use of racial slurs. Spotify has reportedly very recently removed upwards of 70 episodes in which Rogan uses racist language.

At this time, it remains unclear how this whole situation will pan out. Some believe that if a big contemporary artist did what Young and Mitchell did, it might scare Spotify into making a large-scale change regarding Rogan and his platform. Ellie Flowers, senior music industry studies major, believes that something like this might spell extra trouble for Spotify.

“I think it would be maybe a different conversation if some huge superstar like Taylor Swift, BTS or Ariana Grande [pulled their music], like any of those giant cult fan bases,” Flowers said. “But I also think Joe Rogan’s fans kind of also fall into that giant cult following category, so Spotify would put itself in a bit of trouble with his fans if they were to do something like remove his podcast, which is why I have a feeling that they wouldn’t do that.”

This is certainly not the first time Spotify has been embroiled in some sort of widespread controversy. Since it began was founded, artists have criticized Spotify for how little they pay musicians with work on the platform, a figure that averages out to about $0.003 to $0.005 per stream. In 2014, aforementioned superstar Taylor Swift was one of the more vocal critics of Spotify’s lackluster compensation of artists, even pulling her catalog off briefly herself.

Armstrong says that because of this, and as we’ve shifted away from physical media in the last decade, streaming has become a relative non-factor in an artist’s total income.

“Many artists for the last 20 to 30 years haven’t really made a bunch of money selling their records anyway, and instead they’ve made money touring,” Armstrong said. “These legacy artists like Neil Young also get some revenue from songwriting, like every time one of his songs is played on a classic rock radio station or every time it’s used in a commercial; he has all these other ways to make money, and streaming hasn’t been a big part of that.”

Still, in light of the recent Rogan backlash, many consumers have reportedly considered switching from Spotify to another streaming service, with a recent study finding that 19% of users have unsubscribed or plan to unsubscribe due to Rogan. Flowers said that controversies like this can really negatively impact a company and that she’d consider switching in the future if Spotify didn’t take more action.

“I think it does have an effect on Spotify’s reputation,” Flowers said. “I think if this were to become a trend and they were to continue to not try to more actively fight back against that type of misinformation, I think I definitely would consider using another streaming service.”