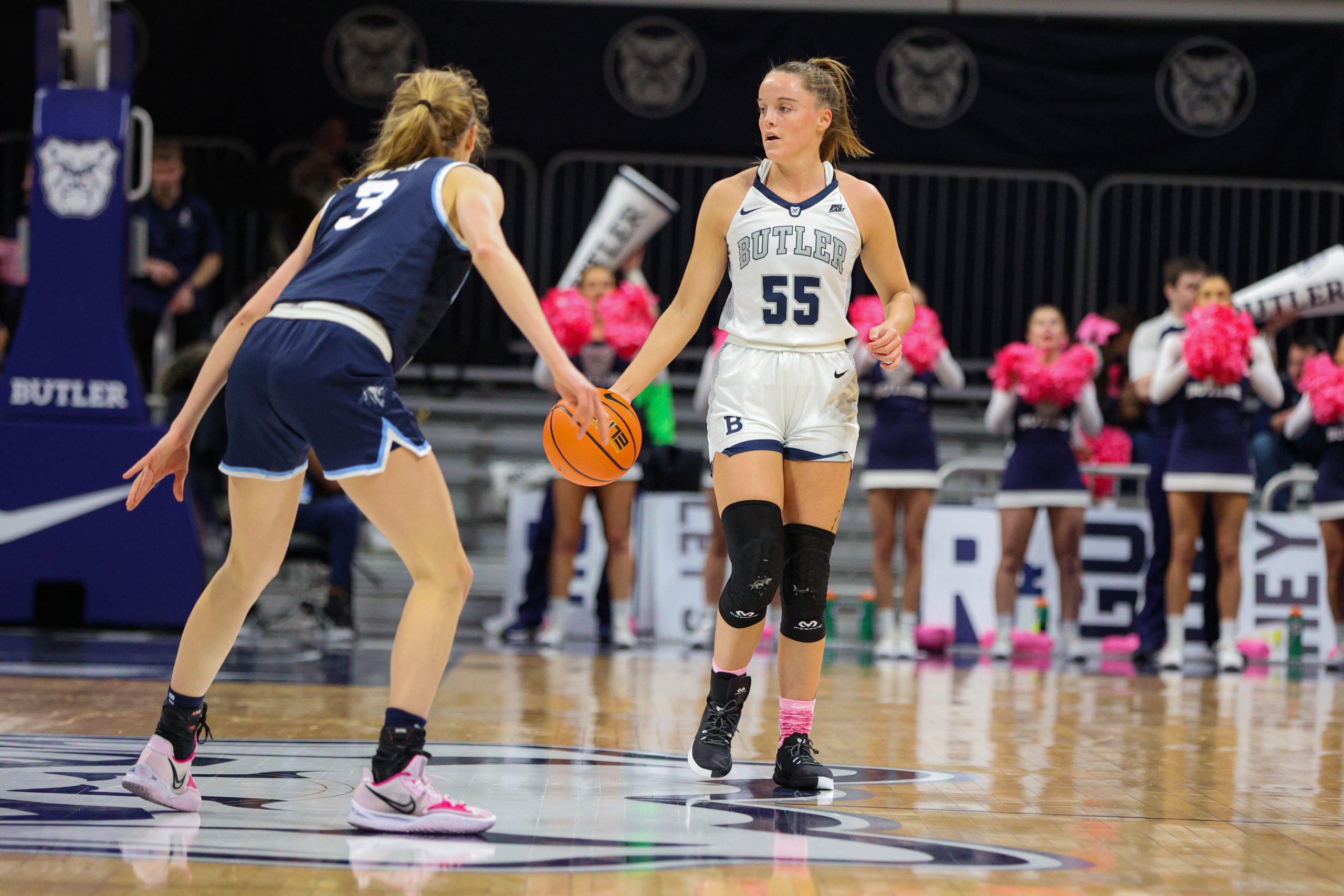 Freshman Kendall Wingler takes the ball past half-court against Villanova on Feb. 25. Photo by Claire Runkel.

The Butler women’s basketball team remains winless in Big East play after being blown out by Villanova in Hinkle Fieldhouse on Feb. 25 by a score of 72-36. Butler struggled mightily on the offensive side of play, scoring a season-low 36 points. Villanova’s Lior Garzon and Maddy Siegrist combined for 50 of the Wildcats’ 70 points — Siegrist had the game-high with 31 points. Butler was led by Celena Taborn who registered 12 points.

Straight from the tip, Villanova played with more energy and desire. The Wildcats were everywhere defensively, disrupting Butler’s offense with high pressure and double teams off of ball screens. After the first quarter, Villanova had turned Butler over seven times and had managed to double the Bulldog’s shot attempts, 18-9. Individually, Siegrist scored 12 points while Butler as a team only managed 8. The 23-8 deficit after the first quarter effectively put the game out of reach for Butler.

The second quarter was much of the same as Butler turned the ball over five times while Siegrist was impressive again with eight of the Wildcats’ 12 points. The Bulldogs played much harder on the defensive end and limited Villanova to just 12. Bench minutes from Kendall Wingler, Ellen Ross, and Zoe Jackson brought much-needed energy for Butler on the defensive end. Villanova went into half holding a 35-17 lead.

Struggles continued in the second half for Butler. The Bulldogs finished the game with only two made 3-pointers and shot 22% from beyond the arc. Butler also committed 24 turnovers with the Wildcats scoring 31 points off of those turnovers.

For a young Bulldog team who has experienced a lot of losing this season, they have shown positive energy regardless of the scoreline. Butler has shown many times that they can compete with Big East opponents when they combine that high energy play with the talent they know they possess. Although this Villanova game seemed to be a step back for the Bulldogs, this group of players has shown they have a short memory and will be ready for their next matchup.