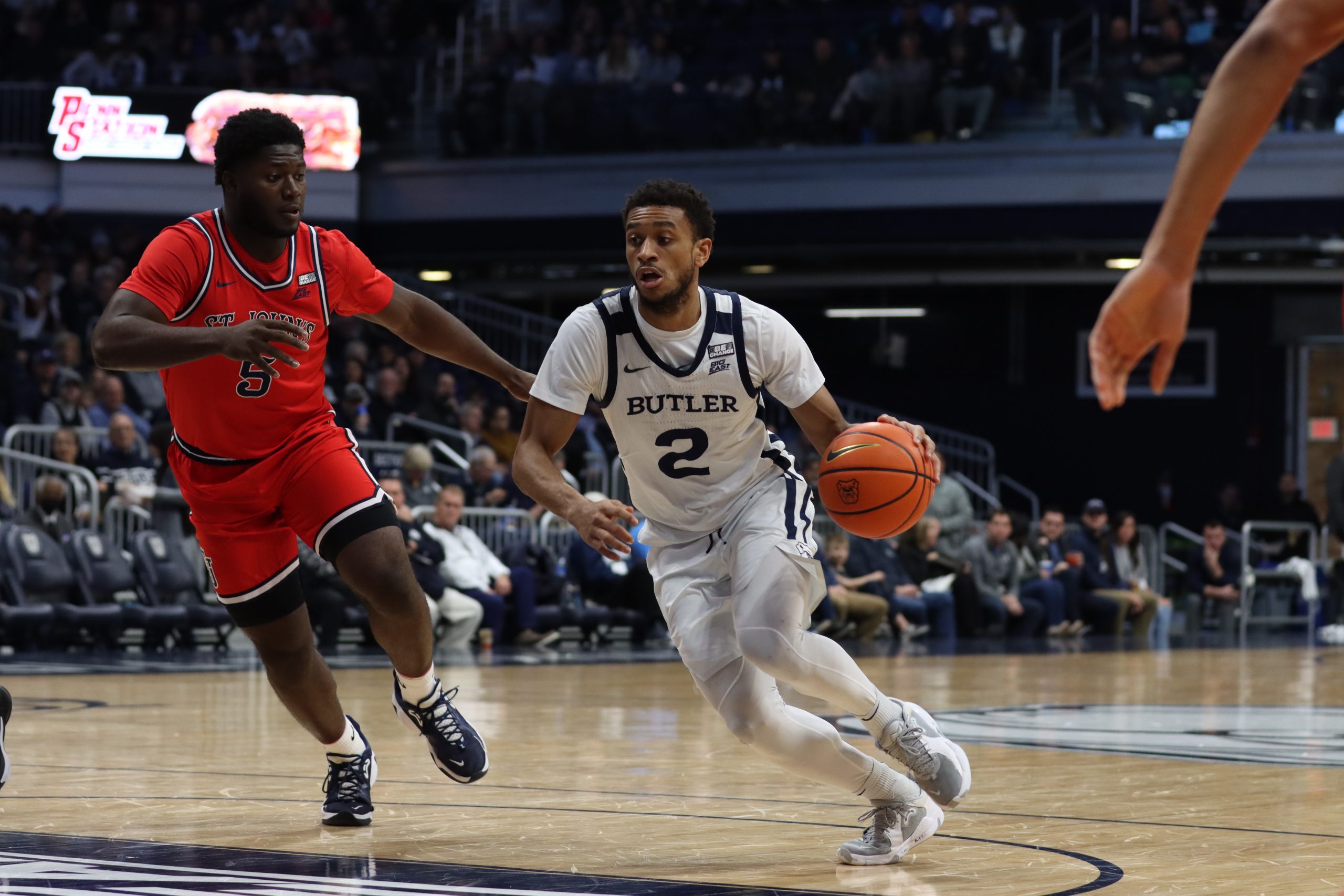 Guard Aaron Thompson is four assists away from tying the all-time assist record in program history. Photo by Francie Wilson.

Sitting at two games under .500 and ninth in the Big East, the Bulldogs’ best odds at any postseason bid starts with playing spoiler at home against No. 18 Marquette. The Golden Eagles are coming fresh off a tough three-game slate that included Providence, Villanova, and UConn. They will definitely be looking at this game as a rebound and springboard to the rest of the regular season. Butler will need to be ready to protect the paint against a Marquette team that has size at the guard and wing position.

Here’s what you need to know ahead of the Bulldogs’ first matchup of the season with the Golden Eagles:

Justin Lewis is priority number one

Marquette forward Justin Lewis will most definitely be the focal point on defense for the Bulldogs. At 6-foot-7-inches, he will be too big for any of the Butler guards, so he will likely attract attention from the likes of Bo Hodges and Bryce Nze.

The second-leading scorer in the Big East at 16.6 points per game, Lewis is capable of scoring at all three levels. Though he isn’t known for shooting from beyond the arc, he can get hot at times. In the last six games, Lewis has had four games with at least four 3-pointers made. It will be a challenge for the Bulldogs to limit Lewis’s productivity inside while still making sure he isn’t left open from three.

Aside from Lewis, some other names to mention for Marquette are Darryl Morsell and Tyler Kolek. Morsell is second in scoring for the Golden Eagles at 13.3 points per game and is one of four players on the team that shoot 80% or better from the free throw line. Kolek — who also shoots better than 80% from the charity stripe — leads the Big East in assists per game with 6.0 and is top five in the conference in steals.

Will AT break the record?

As most Butler fans know, fifth-year point guard Aaron Thompson is on the brink of making program history. He is four assists away from tying Thomas Jackson for the all-time assist record. Thompson is currently 10th in the Big East in assists this season, and currently has 536 career assists.

During the Butler-Marquette game, Butler will recognize Henry “Hank” Foster for his part in the program’s history and progress. Foster’s daughter, Marcia, will accept the honor on his behalf.

Foster was Butler’s first black basketball player. Prior to coming to Butler, he had never played organized basketball and was actually coming to campus to run track — a sport in which he lettered in each of his four years. Head basketball coach Tony Hinkle saw potential in him on the court and offered him a spot on the team. At 6-foot-4-inches, he played center from 1953-57, leading the team in rebounding his junior and senior seasons. Foster passed away in June of 2020.