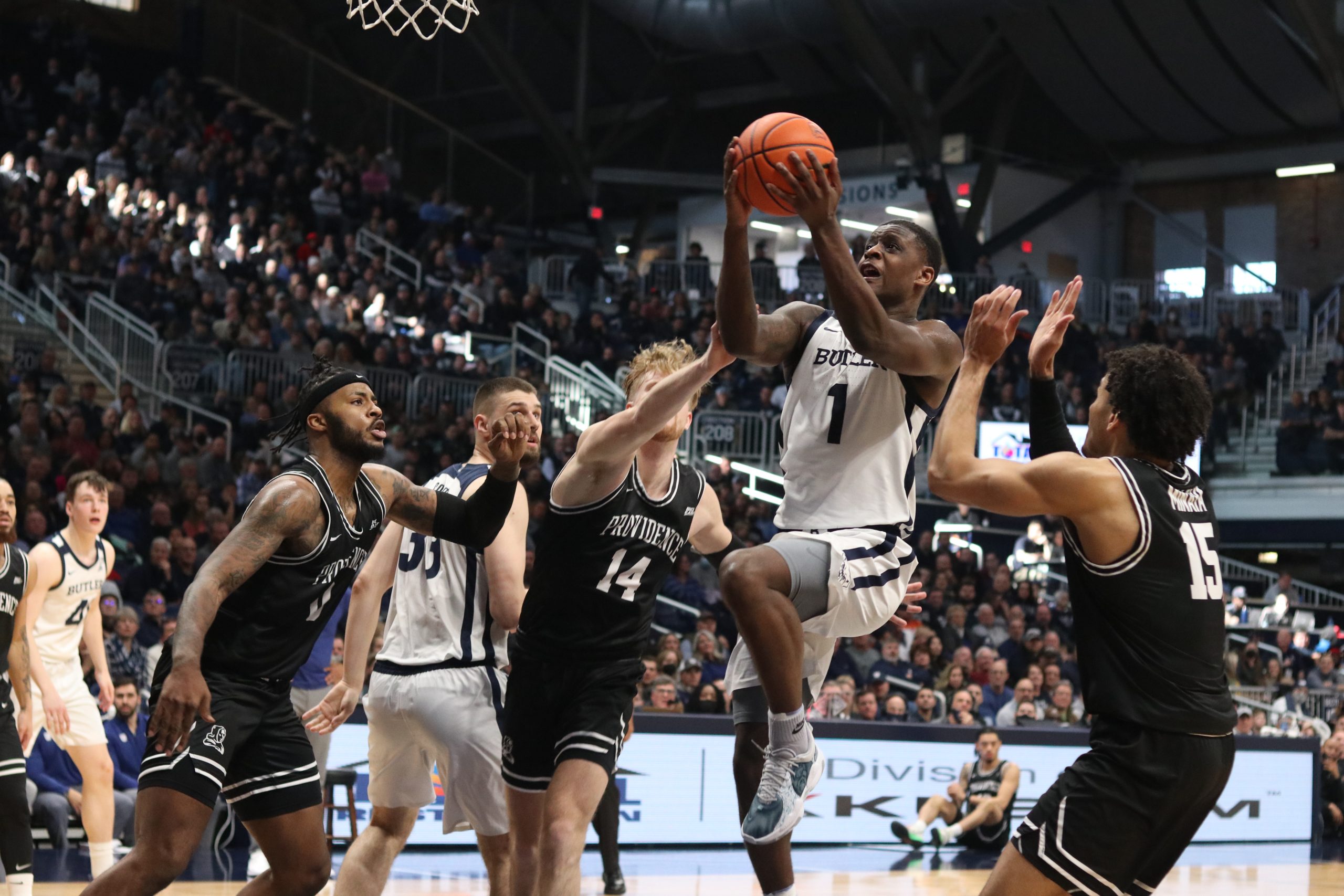 Redshirt senior guard Bo Hodges fights through traffic for a layup against the Providence Friars on Feb. 20 at Hinkle Fieldhouse. Hodges notched 13 points and eight rebounds in his return to the starting lineup after missing two games with a muscle strain injury. Butler went on to lose 70-71 in overtime. Photo by Francie Wilson.

The Butler men’s tennis team fell to Ball State by a final score of 4-2. Seniors Thomas Brennan and Michael Dickson won the No. 1 and No. 4 singles matches, respectively, to award the Bulldogs two points.

The women’s tennis team dropped their third consecutive contest against UIndy 5-1. Sophomore Delaney Schurhamer was able to give Butler their lone point against Isabella Dunlap, the No. 12 ranked singles player in all of Division II.

Janai Crooms’ 17 points and two three-pointers led the Friars to a 69-41 victory over the Butler women’s basketball team. The nation’s leader in field goal percentage — Celena Taborn — led Butler with 14 points and five rebounds, while redshirt freshman Kendall Wingler followed up a strong performance against Creighton with 10 points off the bench.

Melina Wilkison scored in the fourth inning off of an RBI from Sam Hackenbracht to score the only run of the game, giving Ohio State a 1-0 victory over Butler. Freshman Ellie Boyer, graduate student Maddie Moore and senior Bri Avery each collected a hit against the Buckeyes in a game that only saw seven total hits.

Butler rebounded from their opening loss to Ohio State in the Spring Games by defeating Hofstra 5-0. Freshman Sydney Carter singled in the second inning to send two runs in for the Bulldogs while two successful at bats from senior catcher Gracie Voulgaris accounted for the rest of Butler’s runs.

The baseball team’s season opener against Murray State did not go their way, as they fell to 0-1 overall after being outscored 6-4. The Racers scored five runs in the sixth and seventh innings after Butler led 4-1. Butler junior infielder Ryan O’Halloran scored two runs to go with two hits in the game.

The Bulldogs were unable to break their recent losing streak, falling to DePaul by a final score of 5-2. Sophomore Delaney Schurhamer and freshman Norah Balthazor each won points for Butler in their Big East opener.

The women’s track team completed their tenth competition of the season in South Bend at the Alex Wilson Invitational. Senior Rebecca Collester placed seventh in the prelims for the 60 meter race.

Butler continued their impressive performance over the weekend by defeating South Alabama 2-1. The Jaguars out-hit Butler seven to four, but two runs from freshman Ellie Boyer and senior Lauren Fey in the third inning were all the Bulldogs needed to secure their second straight victory.

The Broncos were able to outlast the Bulldogs 6-1, handing Butler their fifth consecutive loss. Butler drops to 1-8 on the year overall.

After a competitive game against Murray State on Friday, the Racers blew out Butler 18-1 the following day, dropping Butler to 0-2 on the year. Graduate student James Gargano’s RBI in the opening inning started the day off for the Bulldogs, but Murray State rattled off 18 unanswered runs, including seven runs in the fourth inning.

In an unforeseen and unique chain of events, the women’s lacrosse game against Denison was played as an exhibition — with no stats available from the matchup. The game was supposed to be the team’s second of the season following an exciting 11-10 win over Kent State, so the team will remain 1-0 entering their matchup on the road against Central Michigan.

To close out the 2022 Spring Games, Butler lost to Bethune-Cookman 5-3, dropping the Bulldogs to 7-4 on the year. Butler led for most of the game, but three runs from Bethune-Cookman in the fifth inning propelled them to victory. Freshman Ellie Boyer scored a run in the second consecutive game as she continues to shine early in the year.

After dropping their matchup against Ball State on Wednesday, the men’s tennis team bounced back with a 4-2 victory against Indiana and improved to 4-5 on the season. Senior Thomas Brennan and Junior Alvaro Huete Vadillo were victorious in their No. 1 doubles match as were junior Zach Trimpe and freshman Patrick Joss at No. 3. Brennan was also victorious in singles along with junior Michael Karr, senior Drew Michael and redshirt senior Michael Dickson.

The Bulldogs improved from Saturday’s 17-point loss to Murray State, but still fell in the third matchup of the series by a final score of 25-12. Butler drops all three games against the Racers to start the year 0-3. Graduate student James Gargano, senior Kollyn All and junior Scott Jones all recorded two runs for Butler. Gargano and Jones also had two hits each to lead the team, while Gargano’s two RBIs led the Bulldogs.

In arguably Butler’s best all-around performance of the season, the Bulldogs pushed the conference leading Friars to the limit in a 71-70 loss in overtime. Sophomore Chuck Harris led Butler with 17 points while senior Bo Hodges returned from a two-game absence to add 13 points and a team-high eight rebounds. The No. 8 ranked Providence squad overcame a 13-point halftime deficit behind 22 points from one of the best big men in the country, Nate Watson. Jared Bynum, who added 18 for Providence, and Noah Horchler, who recorded 15 points, were also key to the Friars’ comeback win.

In their third to last home game this season, the women’s basketball team fell to Xavier 54-73. Freshman forward Sydney Jaynes led the Bulldogs in scoring for the first time this season with 12 points, while redshirt sophomore Tenley Dowell hit three 3-pointers on her way to scoring 11 points.

The women’s basketball team fell to Seton Hall for the second time this season, 84-55. Graduate student and leading scorer Celena Taborn led Butler with 15 points off the bench and also had a team-high six rebounds. It was a historic night for the Pirates’ junior point guard, Lauren Park-Lane, who racked up a school record 18 assists in the contest.