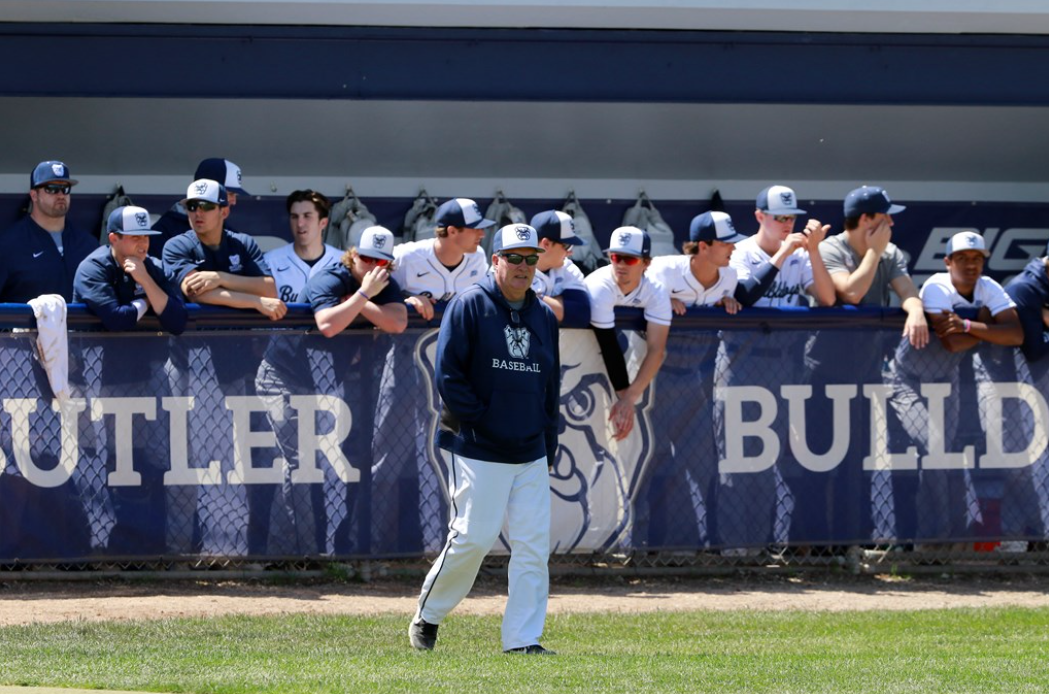 Head coach Dave Schrage directs his team during a game in 2019. This season will be his seventh season with the Bulldogs. The Dawgs are projected by Baseball America to finish sixth in the Big East. Photo courtesy of Butler Athletics.

Every season, Baseball America analyzes and ranks Division I programs in prominent conferences based on their prior years’ performance. For the Big East, Baseball America placed the Butler Bulldogs sixth out of the eight teams heading into the 2022 season. The publication described the Bulldogs’ 2021 season in one word — tough.

Last season the Bulldogs finished with a 14-23 overall record and went 8-13 in conference play. Upon the conclusion of the season, it was evident that the Dawgs defense is what seemed to be the thorn in the side of the ball club. Butler’s pitching ranked dead-last in ERA with a 6.26 average, seventh in runs allowed with 239 and had an opponent batting average of .288.

Their fielding didn’t fare much better, as Butler yielded the worst fielding percentage in the conference with 95.7% and had the second most errors with 54 errors over 47 games.

In addition to their woes on the field last year, the team is also facing a large turnover rate heading into the 2022 season. On offense, the team loses first baseman Dan Harwood, who led the team in batting average, OPS, doubles and home runs. While on the defensive side, the bullpen loses pitcher Jack Myers who threw two complete games — one being a shutout — and tossed 54 strikeouts over 65.2 innings, both pacing the team.

Fortunately for the Bulldogs, head coach Dave Schrage has built a reputation for rebuilding baseball programs. Before coming to Butler, he had inherited a Northern Illinois team that had lost 51 games in 1999, and in two years led the Huskies to a winning season. If any coach can turn a team around after a rough season and bring in the talent he needs to succeed — it’s Schrage.

The Bulldogs pitching stats were an eyesore at the end of the season.

Butler ranked fourth in the conference in walks and hit batters with 156 and 48, respectively. The Dawgs also allowed 54 stolen bases which was tied for most in the Big East last season.

Over the offseason, Schrage put his recruitment focus on his pitching staff, bringing in eight different pitchers into the bullpen — with three of them being transfer students. Schrage’s focus for his rotation this season will be to limit runners getting on base and to force batters to swing more often.

“We have been working on holding runners and not giving up free bases,” Schrage said. “We need to make better pitches when we’re in a good pitching count to finish hitters off.”

To compliment their new additions, their ERA leader, Nick Eaton, will return for his redshirt senior season. Eaton was a transfer himself in 2018, after playing a year at Indiana University. Last year he finished the season with a 3.48 ERA.

Eaton, alongside his fellow pitchers, have been spending the past offseason adapting to Schrage’s philosophy of attacking the plate.

“We’ve been working on having fewer walks,” Eaton said. “I believe it’s a mindset more than anything and not being afraid to attack hitters in the zone.”

The Dawgs were all over the place in 2021 when it came to the offensive stats. They finished sixth in batting average, seventh in on base percentage and sixth in runs scored.

Butler also had a hard time creating any sort of trouble on the base paths, swiping just 27 stolen bases which was tied for bottom of the conference.

“We were last in the Big East in stolen bases,” Schrage said. “We emphasized speed for this recruiting class. We want to put pressure on teams and steal bases with how fast our guys are.”

One thing the Dawgs excelled in however, was putting the ball in play. The Dawgs recorded the least amount of strikeouts over the season, but only were seventh in walks.

After a lackluster team performance in the batter’s box last season, Gargano and his fellow teammates have put an emphasis on taking control at the plate.

“The biggest thing we had to work on this offseason is to always stay aggressive and keep the pressure on the pitcher,” Gargano said. “There is always a middle ground between being too aggressive and being passive, but when you find the sweet spot great things happen up and down the lineup.”

Gargano found that groove last season, as he accounted for seven of the team’s 33 home runs — leading the team in that category. Gargano propelled the Dawgs to third in the Big East in home runs last season, but he knows the team can aim higher. He believes the key to improvement lies within consistency.

“I think I always had the power in me, but I hadn’t found that consistency I was looking for,” Gargano said. “When I can keep my swing simple and focus on the task at hand, that is when good things seem to happen.”

The Bulldogs’ longest winning streak was only two games last season, due in part to inconsistent play. The key to Butler’s success this season will lie in playing consistently on both sides of the ball down the stretch.

Butler gained confidence at the end of the 2021 season, winning three of their last four games against Georgetown, outscoring the Hoyas 30-15 over those four games. Eaton has felt that confidence carries over into the new year.

“We’re definitely motivated coming into this year,” Eaton said. “We know what kind of baseball we can play when we’re at our best, and now it’s about maintaining that consistency.”

Eaton threw a complete game against St. John’s last season — allowing only one run in a victory through seven innings — and attributes his success whenever he steps on the mound to his confidence.

“I just trust myself and be the aggressor on the mound,” Eaton said. “When you have complete trust in yourself, the game becomes fun. You’re then able to follow your instincts and everything just happens naturally without hesitation.”

Having consistency and confidence on the mound is just as important as having confidence behind the plate. Gargano knows part of this confidence also means being alright with not succeeding all the time.

“Baseball is known for being a game of failure,” Gargano said. “But at the plate you have to be confident that you are going to win the battle every single time to help your team.”

Comradery amongst teammates is an important aspect in the club’s locker room, and the Bulldogs are that squad that helps lift each other up.

“What’s special about this group is that we care deeply about each other,” Eaton said.

Schrage has also noticed something special about this new group of Bulldogs. He believes his team has developed grit and will make their opponent feel their tenacity.

“One word is going to define our team — relentless,” Schrage said. “When we get done playing a series or a game we want the other team to say we played hard through and through each inning.”

Butler’s baseball season begins Friday, Feb. 18 in Kentucky against Murray State, where the Bulldogs will play a three-game set. The first home game is scheduled for March 2 against Manchester University. Big East play will begin in April against the Villanova Wildcats for a three game weekend series.

While analysts have set the ceiling very low for Schrages’ squad, that hasn’t affected the coach and his goals for this season.

“No matter what, our goal is to get in and win the Big East tournament,” Schrage said. “Great stories come from great opportunities, and we have no expectations or pressure so let’s take the opportunity and make a great story.”

The 2022 baseball season is a new chapter with a blank page, and the Dawgs look to write in a story for the history books.