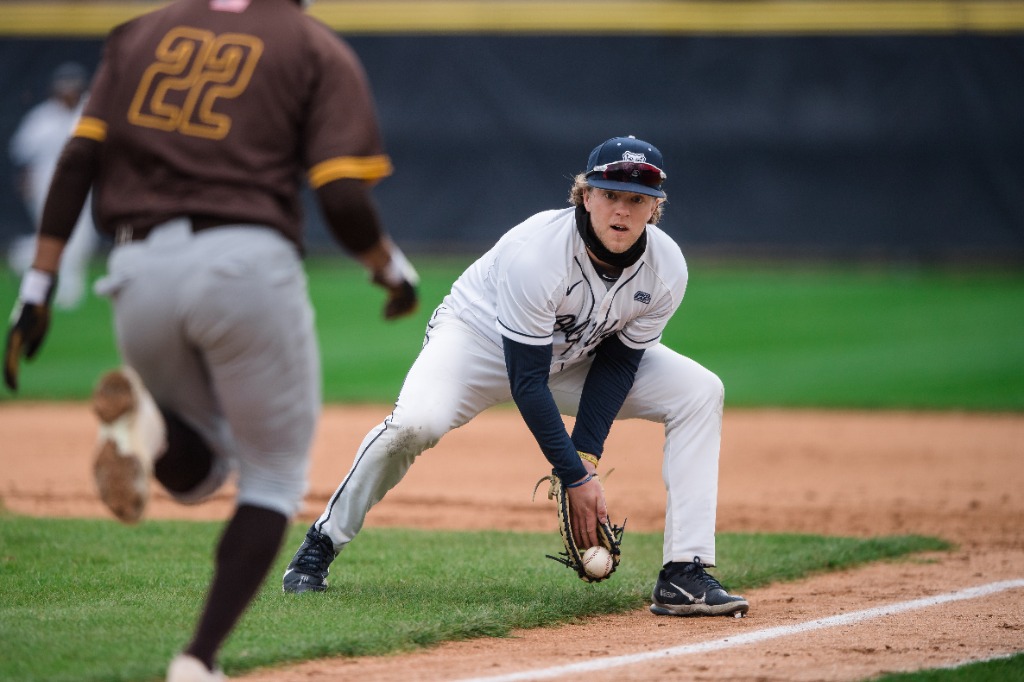 Senior infielder Andy Bennett fields a ground ball during a game against the Valparaiso Beacons on March 31, 2021. The Bulldogs were outscored 49-15 by the Racers en route to a 0-3 start for the team. Photo courtesy of Butler Athletics.

The Butler baseball team was swept this past weekend in their season opening series by Murray State in Murray, Kentucky from Friday, Feb. 18 through Sunday, Feb. 20. The team falls to 0-3 to start their 2022 season.

Butler lost in progressively worse fashion as the series went on, losing 6-4 on Friday, 18-1 on Saturday and 25-12 Sunday. The Bulldogs were outscored in the series 49-15 — the Racers scored over triple the amount of runs Butler produced.

Even though Butler left Kentucky empty in the win column, there were a lot of positives — and of course negatives — to take away from the series.  While this series didn’t go Butler’s way, it still acted as a way to get the players back in the groove of playing again.

For the negatives, it was Butlers pitching. Through 24 innings of work, the pitching staff was charged with 45 earned runs, which calculates to an eye-popping 16.88 ERA.

Along with the runs, the bullpen also issued 24 walks and allowed 52 hits. The WHIP — walks and hits per inning pitched — came up to be a 3.17. Which essentially means that for every inning pitched, Butler averaged over three baserunners allowed.

While the team didn’t fare well overall on the mound, it should be noted that the team’s ERA leader — Nick Eaton — did not make an appearance this weekend against the Racers.

For the positives, the Bulldogs did showcase their speed, something that Schrage had addressed in this year’s recruiting class.

In the series, Butler stole five bases while only being caught twice. Last season Butler only stole 27 bases through 37 games, tying them for the last place in the Big East.

Graduate student Travis Holt had a solid weekend out of the leadoff spot for the Dawgs. He batted for .400, scored three times, walked three times and stole two bases. Holt leaves this series with an on-base percentage of .539 — which is exactly what is wanted from a leadoff hitter.

Butler will head down to Jackson, Mississippi on Friday, Feb. 25 to face Jackson State. Then on Saturday, Feb. 26, the team will play a doubleheader against Prairie View at noon, then turn around to play Jackson State again at 4 p.m.