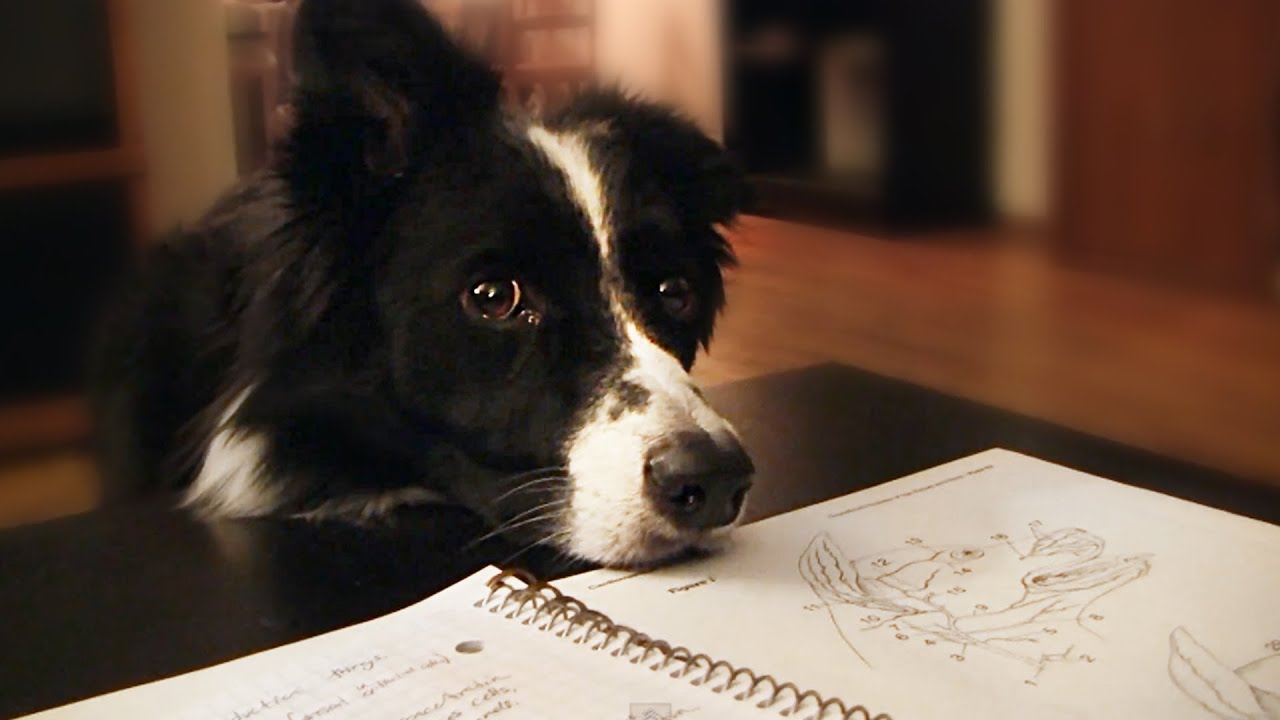 A college dog frowns, probably because he does not know how to do math or science and may consequently fail his courses. Photo courtesy of KatsDogs on YouTube.

Early on during the summer, my house earned its nickname as “The Zoo” thanks to the cat and puppy that occupied it. Despite the fact that I owned neither of these animals, taking care of them consumed many of my days and probably put me at risk for high blood pressure.

Eventually, the animals were temporarily relocated to loving, more capable homes, as my roommates and I collectively concluded that caring for pets as a college student was more trouble than it was worth — even for a squadron of six energetic girls.

I am a strong proponent of the idea that there is a time and place for everything, and being in college is simply neither the ideal time nor place to adopt or buy a pet. Obtaining a higher education involves an unstable and ever-changing period of life wherein students are meant to figure out their own passions, goals and ultimately, a plan for the future. Many students are still baby-stepping through their first taste of adulthood and learning how to take care of themselves independently. To take responsibility for a pet that is likely to live over a decade is a bold decision for someone who is probably still on their parent’s health insurance.

Now, I will not negate the joy a fuzzy friend brings to this campus. Having a pet can bring a lot of happiness, excitement and comfort — otherwise, emotional support animals would serve no purpose. I am also an advocate for students prioritizing their mental health, and I appreciate that our campus allows students access to such a resource.

However, throughout the past several years I’ve spent on this campus, I have seen some students take advantage of Butler’s policy allowing for emotional support animals despite not legitimately qualifying for one. While the process is complicated, there are a myriad of loopholes, including having a roommate with a “documented disability” fill out application forms for a neurotypical roommate desiring to house a pet on campus.

Sometimes, students don’t attempt to register their animals at all, instead opting to harbor a furry fugitive within their dorms or apartments — a decision that could land students a lofty fine of $50 a day and a potential visit from Animal Control.

Either way, students who bring pets to campus without a documented disability abuse the system, posing an inherent threat to those who truly need a legitimate emotional support animal. If enough unregistered pets are discovered on campus, who is to say that Butler would not consider revoking their emotional support animal policy entirely?

By exploiting opportunities, people also put others at risk of suffering the consequences. Take, for example, the time I broke the playground rules by jumping off the swings and subsequently sprained my wrist. Fearing the wrath of elementary consequences, I lied and said I fell, causing the swingset to be removed for safety reasons. Total douchebag move on my end — one that illustrates how easily a person’s selfish actions can ruin something for everyone else.

Would selfishly bringing an unauthorized pet to campus be worth the hassle? It’s unlikely.

I have seen my fair share of students attempt to take care of pets in college. While most instances have not ended up in flames, each one has introduced a unique set of challenges to the owners and their roommates that they otherwise might not need to deal with. For instance, I never expected to be late for work because I slipped in the mud while attempting to chase down a runaway puppy in leather pants and Doc Martens.

For me, living without pets has been a weight off my shoulders. Don’t get me wrong, I like having animals. I grew up surrounded by them, but having them in college was draining. I have a busy schedule, and that coupled with my type B personality did not equip me with the time, energy or mental elasticity to be able to help take care of a pet. Oh, and now, I can sleep — no longer am I awoken at six in the morning to the sound of our cat incessantly pawing at my blinds so she can see outside.

Training an animal to behave in an environment as disruptive and volatile as on-campus housing is incredibly difficult. Young pets need consistency in order to form healthy habits, and disorder abounds on college campuses. Until they are fully trained, messes and loud noises are a guaranteed side effect of pet ownership, which can be frustrating and inconvenient for pet owners and their neighbors. After all, do you really want to be the source of all those noise complaints?

Taking care of a pet is a challenge in general, and adding a full and unpredictable college schedule into the mix is bound to complicate things even further. It’s tough on students to find the time to balance schoolwork, personal needs and extracurricular activities, let alone keep an animal alive. Also, it really cannot be ideal for a pet to live its life bound to the confines of student housing, whether that be a dorm, on-campus apartment or a senior house.

Even the college pet owner with all the time in the world is likely to be met with an instance in which it is necessary to enlist the help of others to make sure their pet’s needs are taken care of. You might think, “Who wouldn’t kill to spend a couple hours hanging out with a four-legged buddy?” However, it gets old fast, and can become stressful and inconvenient for both parties to make the proper arrangements.

Pets are a serious commitment. The average cat or dog is expected to live for a decade, if not more, and it can be difficult to see the long-term responsibilities through the appeal of a fluffy coat of fur and wagging tail.

There are so many factors to consider when making the decision to adopt a pet: Would a pet be able to live a fulfilled, enriched life within your current living space? Will your post-grad job allow you the necessary time and resources to continue taking care of a pet? How will owning a pet affect your housing options after graduating? Would you be able to take care of this animal 100% on your own? Who is letting Fido out to go potty when you’re living it up at Brothers?

I’ve seen a lot of pets pawned off on others throughout my college career as the result of the realization that for whatever reason, the student can no longer take care of them. In most instances, pet ownership simply just does not align with the obligations of a college career. With proper forethought, you can avoid having to put pets through the stress and anxiety of being rehomed — even though you shouldn’t do that in the first place.

Please, if you are considering adopting an animal in college, just get a fish. In a few years, you’ll be better equipped to manage taking care of whichever dog, cat, rodent or reptile strikes your fancy, and your future pet will thank you for waiting.