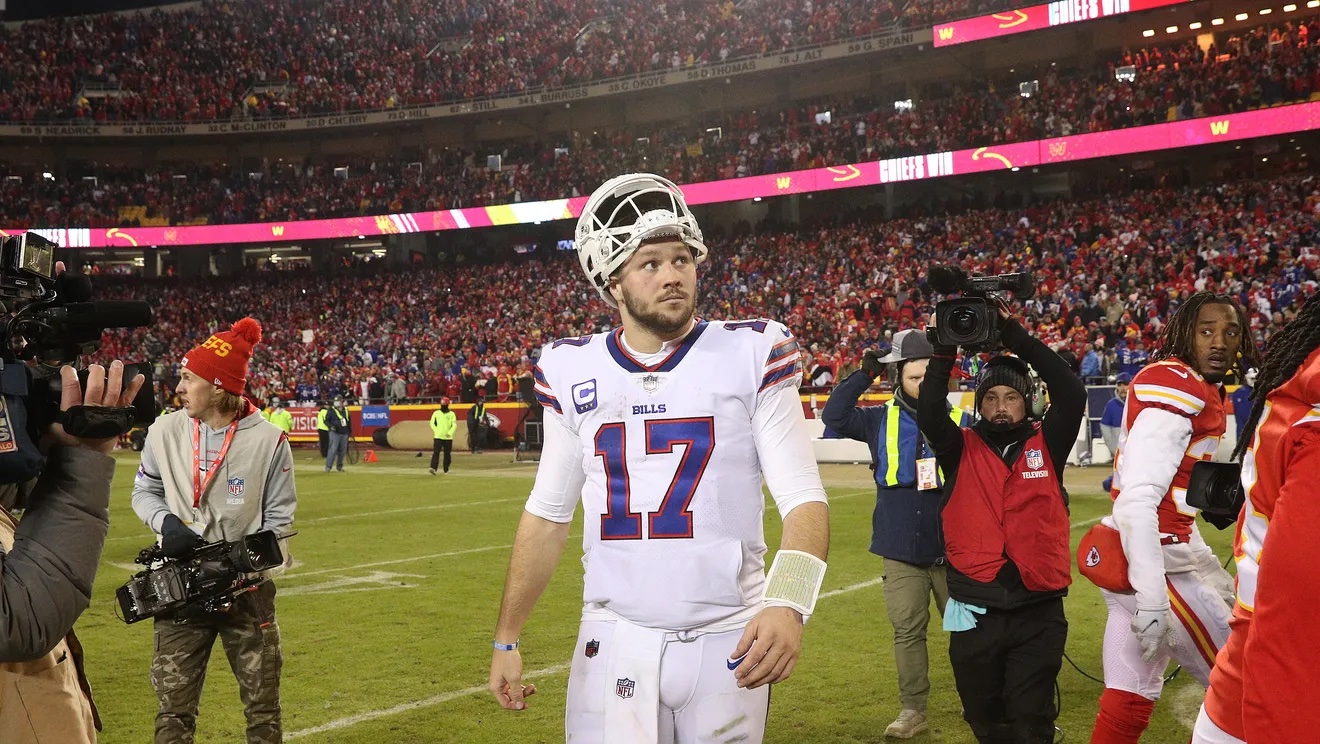 Buffalo Bills quarterback Josh Allen heads off the field after a 42-36 overtime loss to the Chiefs in the AFC divisional round of the NFL playoffs. Allen’s team never got to take the field on offense in overtime. Photo courtesy of Jamie Germano.

This past weekend, each of the four NFL divisional round games all came down to the final play. The kickers for the Cincinnati Bengals, San Francisco 49ers and Los Angeles Rams all sent their respective teams to the conference championship rounds by way of last second field goals.

However, none of these games could match the insanity that was the Buffalo Bills versus the Kansas City Chiefs at Arrowhead Stadium on Sunday night. Both teams had overpowering offenses led by quarterbacks that have already left their impact on the game of football, and both are well under 30 years old.

Bills Josh Allen and of the Chiefs Patrick Mahomes are both generational talents. In this game, both quarterbacks took turns marching down the field and scoring at will. At the two minute warning in the fourth quarter, the score was 26-21 in favor of Kansas City. By the time football fans across the country blinked, the score was 36-36 after Harrison Butker nailed a field goal for the Chiefs to send it to overtime. The two teams combined for 25 points in the final two minutes of the regulation.

In overtime, the fans roared when the Chiefs won the toss and elected to receive the ball. Then, after marching down the field — like everyone knew they would — Patrick Mahomes completed a back shoulder strike to the reliable Travis Kelce to send the Chiefs to their fourth consecutive AFC championship game.

Except the problem was this, Josh Allen — who had thrown nine touchdown passes and zero interceptions in two playoff games — sat on the cold bench and watched his defense surrender the touchdown to end the Bills run in the playoffs.

To me, this seems like a wasted opportunity for the league. Instead of allowing two superstars in the league to continue to showcase their skills, the game ended. The Buffalo Bills lost this playoff game by a flip of a coin. This allowed Kansas City to win the game without Buffalo’s offense ever taking the field.

Out of all the professional sports, the NFL is the only league where a team can steal away a game — solely on chance — without their opponents being given a fair shot at reciprocating.

To put this in perspective, imagine if the NBA incorporated a rule that whoever scores the first point in overtime wins the game. Say LeBron was on the losing team and never got to touch the ball in overtime. Doesn’t make sense if you ask me.

I remember a time when a single field goal could win the team a game in overtime. That rule was restructured after the New Orleans Saints knocked in a 40-yard field goal to defeat a Minnesota Vikings team that had Brett Favre and Adrian Peterson in 2010. Now, a team must score a touchdown to end the game, and the opposing team could only match if a field goal was scored.

I will admit this is a much better rule than one score wins — but how many times have legends lost a big game because they never got an opportunity to make a big play for their team?

A year after Favre’s Vikings lost, Tim Tebow beat the defending champion Pittsburgh Steelers on a 80-yard touchdown. Roethlisberger shook hands with Tebow in the Denver cold and exited Mile High Stadium without being able to touch the ball. Then, in the 2015 NFC Championship, the Seahawks scored a touchdown on the Green Bay Packers the same year Aaron Rodgers won his second MVP award — he never got the chance to counter.

This begs the question — why not use the college football overtime format rather than the controversial NFL rules?

In the NCAA, a team starts on the 25-yard line — and no matter the result of the first drive — the opposing team gets a chance to match or even win depending on the circumstance. This has led to some fun scores in college football.

In 2018, the LSU Tigers and Texas A&M Aggies played for seven overtimes of just trading the ball back and forth. The Aggies ended up winning the game with a video game score, 74-72. This way it provides equal opportunities for both sides and doesn’t result in unfairly calling the game after one touchdown.

Sunday night’s game in Kansas City should be the final straw for how the NFL handles their games that go into overtime and here’s why: that game had the perfect script.

Earlier that day, the legend Tom Brady had lost in what could be his final football game. On Saturday, Aaron Rodgers threw up a peace sign to Packer fans in what could be his final game in a Packer uniform or quite possibly his last game in the NFL. Either way, eras had ended in dramatic fashions, and the two stars who are paving their legacy were showcasing why they have been deemed the next great NFL quarterbacks.

Between the back-and-forth action and jaw dropping catches, fans were already deeming it to be one of the greatest playoff games of all time. Then with the game tied, the Chiefs scored one touchdown and just like the ending of “The Sopranos,” the script cut to black without featuring the other star who could only watch, like the other million fans did from their televisions.