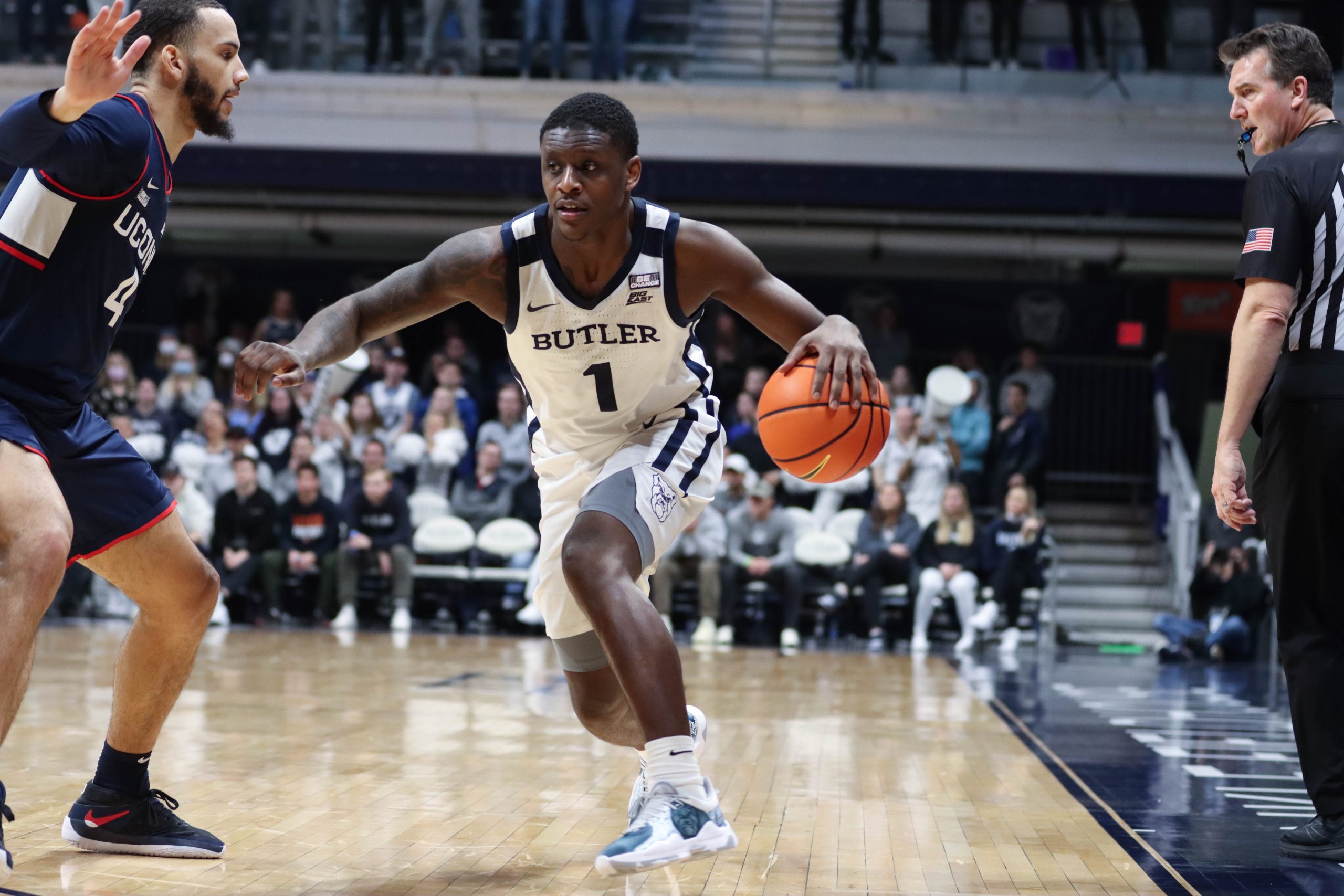 Graduate student Bo Hodges against UConn on Jan. 20. Hodges is averaging 14.5 minutes per game since his return from injury on Jan. 13. Photo taken by Francie Wilson.

For the first time in two games, Butler men’s basketball will be playing a team not named the UConn Huskies. Instead, the Dawgs will return to the East Coast to face the Providence Friars. After losing five of their first seven Big East games, Butler will search for a win that has eluded them in their last three attempts. A win on the road will not be easy, however, especially against a Providence team that is undefeated at home and sits atop the conference standings with a 5-1 record.

Butler was able to hang with and competed well in the first half against a good UConn team in their last game. Though things fell apart in the second half, the Bulldogs can build on what they did well and try and carry them into this game.

Here’s what you need to know ahead of Butler’s fifth matchup against a ranked conference opponent:

Since the beginning of conference play, the Bulldogs have had the same starting five in each of those seven games. The lineup consists of Aaron Thompson, Jayden Taylor, Jair Bolden, Bryce Golden and Bryce Nze. In those seven games, Butler has gone 2-5, with their only wins coming against the two teams that are currently ranked second-to-last and last in the Big East.

In this stretch, the Bulldogs have had wildly inconsistent and inefficient production on offense. The team is shooting 39% from the field, 27% from three, and 68% from the free throw line. These numbers just aren’t good enough to compete against the top teams of the conference, hence the reason why Butler’s five conference losses had an average point differential of 21 points.

A Bulldog that has mightily struggled in the starting lineup has been Jair Bolden. In the team’s seven conference matchups, Bolden is averaging 5.3 points per game — take away his 23-point performance against Georgetown and that drops to just two points per game. Red hot from three to begin the season, Bolden has seemed to crash back down to Earth and is shooting 24% from beyond the arc in the last seven games. With his minutes declining in the last few contests, it wouldn’t be out of pocket to wonder if head coach LaVall Jordan may consider starting someone else — Simas Lukosius or even Bo Hodges — in the lineup and begin playing Bolden off the bench.

How good is Providence?

Spoiler alert, the answer is very good. The 21st ranked team in the country has a 15-2 overall record and has won 10 of their last 11 games. Nothing necessarily pops out on the stat sheet — 44% from the field, 33% from three, and 74% from the free throw line. The Friars are just well-coached under Ed Cooley and they have found ways to win all year.

One thing that does stick out for Providence is their dominance at home this season. They are a perfect 11-0 and are shooting 49% from the field on their home court. They have four players who average double-digits in scoring and are led by their 6-foot-10-inch center Nate Watson. Watson averages 13.8 points per game and hasn’t attempted a three-pointer all season, meaning he will be looking to get the ball in the paint all game long.

By looking at their numbers, it’s evident that the Friars can score at all three levels. Butler will have to get back to playing the stout defense they have been known for in order to limit the Friars’ efficiency on offense and pull off the upset.