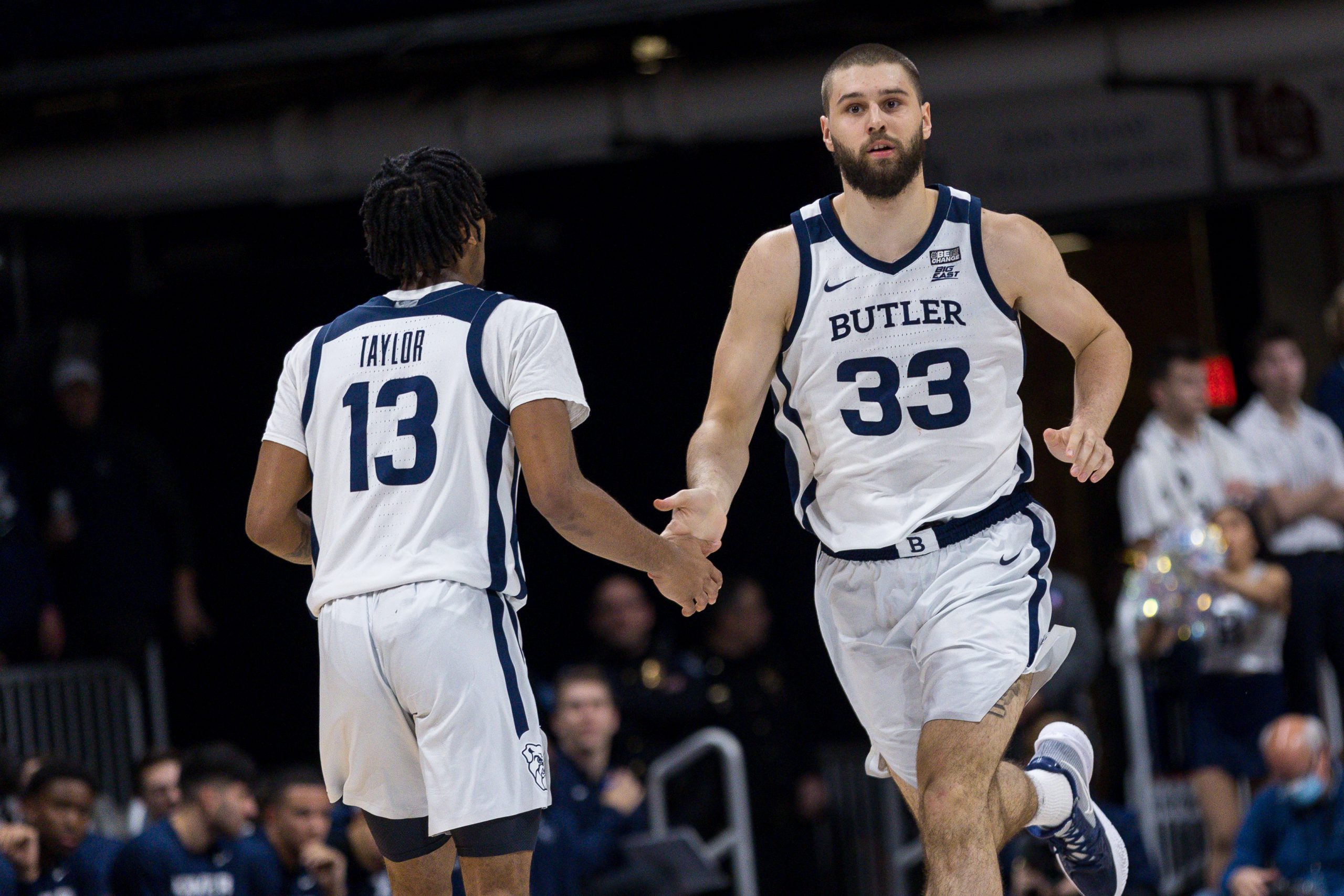 Jayden Taylor and Bryce Golden high five each other after scoring a basket against Xavier on Jan. 7. The Bulldogs have lost the last six out of seven games since starting Big East play. Photo by Claire Runkel.

Women’s Basketball blown out by Creighton

The women’s basketball team was pummeled, 44-95, by Creighton in their second matchup of the season. Trinity White led the Dawgs with 12 points, three rebounds and two steals.

Emma Ronsiek stole the show for Creighton, scoring 20 points on 8-12 shooting from the field. Ronsiek was one of four Bluejays to score in the double digits. The Bluejays finished the game with 30 assists and made 14 three-point attempts.

The men’s basketball team couldn’t hold on as UConn pulled away in the final minutes for a 75-56 victory for the Huskies. Chuck Harris led the Bulldogs in scoring with 16 points and Aaron Thompson added 10 points and five assists.

The Bulldogs kept the game close as they led going into halftime by four points, and were only trailing by five points with 4:18 remaining in the second half. However, UConn went on an 18-4 run against the Dawgs, closing out the game with dominance.

Tyrese Martin led the Huskies with 27 points — 25 of which came after halftime.

For the first day of the meet, highlights included freshmen Ben Bradley and Michael Beros finishing second and third in the 200m dash at 22.88 and 22.89, respectively. Graduate student Tom Pitkin came in third in the 400m with a 48.48 mark.

The women’s swim team returned to action for their first meet since Nov. 18.

Junior Abigail Roberts was named the “Swimmer of the Meet” for Butler. Roberts posted a personal-best time in the 200 Free, clocking a Big East qualifying time at 1:59.34. She finished eighth while her teammates Grace Crane and Cami McGrady placed ninth and 10th at 2:02.16 and 2:04.06, respectively.

The 200 Medley and 200 Free relay teams both placed fifth.

Butler women’s tennis fell to Miami of Ohio, 1-6, in their home opener for the spring season. Freshman Nancy Cabanas beat Miami’s Mayu Ushio in singles — 6-2 and 6-4 — for Butler’s only point in the team score.

Men’s Tennis shutout on the road against Middle Tennessee

The Butler men’s tennis team fell 7-0 to Middle Tennessee State. Senior Tom Brennan faced off against the No. 30 ranked college tennis player, Stijn Slump, but lost in a tiebreaker on the third set, 12-10. Senior Michael Dickson also won a set, but Middle Tennessee’s Chris Edge won in the tie breaker, 10-2.

Butler’s women’s basketball team was defeated, 103-69, by DePaul’s on fire offense. Emilia Sexton led the Bulldogs in scoring with 19 points and shot 4-5 from beyond the arc. Alex Richard and Tenley Dowell both contributed five rebounds and added 14 and 13 points, respectively.

During the second day of competition, junior Morgan Walsh won the 600m with a time of 1:36.40. Following Walsh was teammate Lexi Affolter, who ran a time of 1:42.33 to finish in third place in the 600m.

Graduate student Rebecca Collester finished second in the 200m dash with a time of 25.07, making her time the fourth fastest in the Big East this season.

The men’s tennis team beat Lipscomb 4-3 in their back-to-back matches in Tennessee over the weekend. No. 2 doubles team Michael Dickson and Drew Michael and No. 3 Patrick Joss and Zach Trimpe both picked up 6-3 wins to start off the match.

In singles play, Thomas Brennan, Alvaro Huete Vadillo and Michael Karr all picked up wins in straight sets to seal the victory for the Dawgs.

The Butler men’s basketball team came up short of an upset in a 69-62 loss to Providence. Chuck Harris led the team in scoring with 21 points in his first start since November. In Bo Hodges’ first start of the season, he boasted 17 points, eight rebounds, two assists and two steals.

The game was in reach for the Dawgs at 58-62 until the final two minutes, where the Friars pulled away by going on the 7-4 run to close out the matchup.

Marquette got out early, jumping to a 20-4 lead in the first quarter. The Golden Eagles continued to dominate the Bulldogs all game, amassing 38 rebounds and earning 23 second chance points. Three players finished scoring double digits for Marquette.