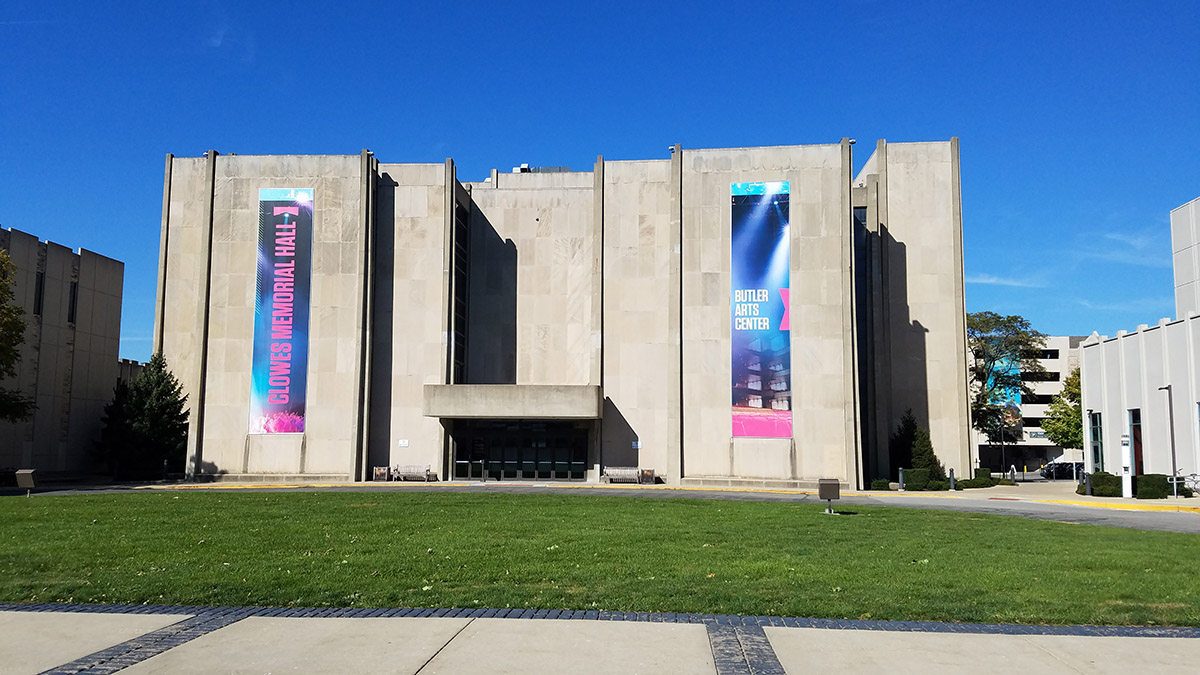 Students will graduate at Clowes Memorial Hall and Schrott Center for the Arts this spring. Collegian file photo.

Students participating in the spring 2022 commencement ceremony will not walk across the stage at Hinkle Fieldhouse or with their entire graduating class. Instead, there will be six separate ceremonies for each of Butler’s colleges. Two of the colleges will have their ceremony in Schrott Center for the Arts while the other four will be held in Clowes Memorial Hall.

The commencement celebration will take place over the course of two days. On May 6, there will be a degree conferral at Hinkle Fieldhouse. The college ceremonies will be held on May 7 at various times.

The degree conferral is when graduates will be awarded their degrees and ceremonially move their tassels. This ceremony will take place at 4 p.m. on May 6 and each graduate will receive six guest tickets.

The graduates will not get to walk across the stage until May 7 when they participate in their college specific ceremony. Similar to last year, the college ceremonies will feature faculty and student speakers from the graduates’ college. Each graduate will receive four guest tickets for this event.

“You get six tickets for Friday, but you only get four for Saturday,” Johnson said. “So who are you going to invite? And who gets to go to one ceremony, but not the other?”

Aaron Hurt, executive director of the Butler Arts and Events Center, said in an email to The Butler Collegian that there was a committee of faculty, staff and students who were involved in making the decision to change the format and location of the ceremony.

Hurt said the final decision was made because of positive feedback from the 2021 commencement ceremony which was also held by college.

Butler will not host a commencement ceremony this December for winter 2021 graduates. Those graduates are invited to participate in the spring 2022 ceremony. Hurt said they do not plan on having a winter commencement going forward.

Johnson was planning on having a graduation ceremony this December when she finished her degree but will no longer have that opportunity.

“We were given the encouragement or option to return in May to walk with May graduates,” Johnson said. “But I mean personally, I won’t be in Indianapolis in May, so I won’t have that option.”

Johnson said it seems a bit repetitive to have a whole separate ceremony with a specific college.

“It just kind of complicates things and makes it harder than it needs to be,” Johnson said.

The decision to have separate ceremonies has caused some students to be disappointed and frustrated.

Senior strategic communication major, Kaitlyn Luft, said the biggest disappointment is not walking across the stage at Hinkle Fieldhouse.

“Everyone wants to graduate in Hinkle, it’s an awesome space,” Luft said. “That is probably the biggest bummer that people have been talking about.”

Luft said she has not heard as many complaints about the ceremony being split up by college since it will make the ceremony go by faster.

“I really don’t mind it being split up by colleges, and I don’t think other people do either,” Luft said. “I think it’s more the Hinkle thing. I think people want that.”

Hurt said at this time, the details and logistics of the individual ceremonies are still being worked out. He did not say whether or not President James Danko would be at every ceremony.