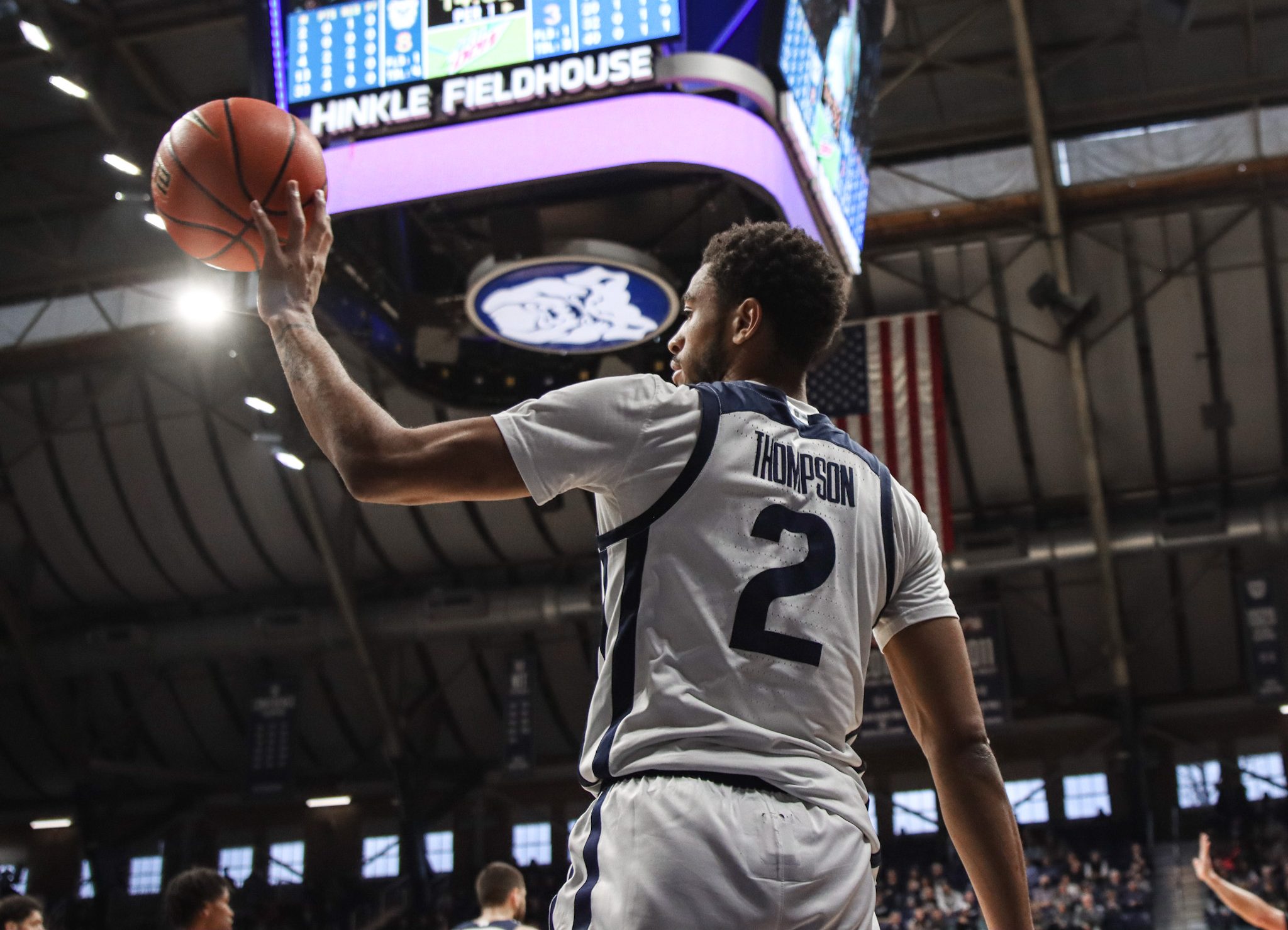 Aaron Thompson passes the ball to a referee in Butler’s win over Eastern Illinois on Dec. 11. Thompson scored 14 points and dished out 10 assists in Butler’s 66-54 win. Photo by Grace Denckhoff.

The Butler men’s basketball team, fresh off a four-game winning streak, will have their toughest test of the season tomorrow, Dec. 18, against No. 3 Purdue. The Boilermakers were ranked No. 1 for the first time in school history just a week ago but lost to Rutgers on a buzzer-beating three on Dec. 9 to lose that honor.

The Boilermakers now sit at 9-1 but are still undoubtedly one of the best teams in the country. Butler has fared well in the Crossroads Classic though — they are 3-0 versus top 10 teams and 4-1 versus Purdue. However, this is likely the best Purdue team Butler has faced in the past decade and possibly ever, so the Bulldogs will need to bring their Hinkle Magic with them on the 15-minute drive down to Gainbridge Fieldhouse.

The Boilermakers have a ton of talent on their roster, and like many Purdue teams under head coach Matt Painter, the roster is very tall. Among the 11 guys that consistently see minutes, not a single one is under 6-foot-4-inches. Zach Edey, Purdue’s starting center, is listed at 7-foot-4-inches, giving him a whopping seven inches on Butler’s go-to big Bryce Golden. Butler has struggled against tall players this season, but Edey usually only plays about 18 minutes per game and does not rack up as many rebounds and blocks as one might expect for a player of his size.

Unlucky for the Bulldogs, Purdue has an even better big on the bench. Trevion Williams, the 6-foot-10-inch 255-pound senior, is a monster. He has scored over 20 points four times so far this season including each of the last two games and grabbed 18 rebounds against Iowa on Dec. 3. The Bulldogs must find a way to slow Williams down to have a chance in this game.

Purdue’s skill goes beyond their bigs too. Jaden Ivey has had a breakout year so far, so much so that he’s a projected lottery pick in the 2022 NBA draft. Ivey leads the Boilermakers in minutes played, points, steals and is second on the team in assists. Just like Williams, Ivey needs to be a focus for Butler’s defense because he can win this game by himself.

While Purdue is 10 or 11 guys deep, the last crucial guy to preview is Sasha Stefanovic. Stefanovic is a straight sharp-shooter, hitting 43% of his 63 3-point attempts so far this season. A significant part of their offense is run through and around Stefanovic, and he leads the team in assists along with 3-pointers. The Bulldogs have done a decent job in their perimeter defense so far this season, but Stefanovic and company will be their toughest test.

Keys for a Bulldog upset

It’s no secret that Butler is at their best when they limit turnovers and can subsequently play at a slower pace. This is especially important versus Purdue and Jaden Ivey, who is deadly in transition. Turnovers killed the Bulldogs in their three losses this season — they averaged nearly 18 turnovers and 51 points in those three games. In their seven wins, the team has averaged 13 turnovers and 71 points.

The other key is Butler needs to shoot the ball well from the outside. Obviously, that is easier said than done, but if the Bulldogs shoot in the 20’s or low 30’s from three, it will be a very difficult game to win. Butler will likely find it difficult to score in the paint — even with the early season turnaround from Bryce Golden — because of the skills and size of Purdue’s bigs. If Butler can get open looks from the outside and knock them down, it will open everything else up on offense. Conversely, if the Bulldogs fail to do so, they won’t be able to keep up with Purdue’s offense that averages 87 points per game, even if Butler puts together a stellar defensive performance.

Potential for a statement performance

Butler’s overtime win over Oklahoma seemed to be a bit of a turning point for this team after a rough stretch, but this game has the potential to build even more momentum as the Bulldogs prepare for the Big East schedule. Butler doesn’t even need to win to build this momentum — if they are able to keep the game close against one of the best teams in the country, it could give the team the confidence that they can take on and beat any team in the Big East.

No sane Butler fan should expect a win, but a closely contested game is not out of the question. This final non-conference game will be a great barometer for what to expect from the Bulldogs before the grind of the Big East begins.