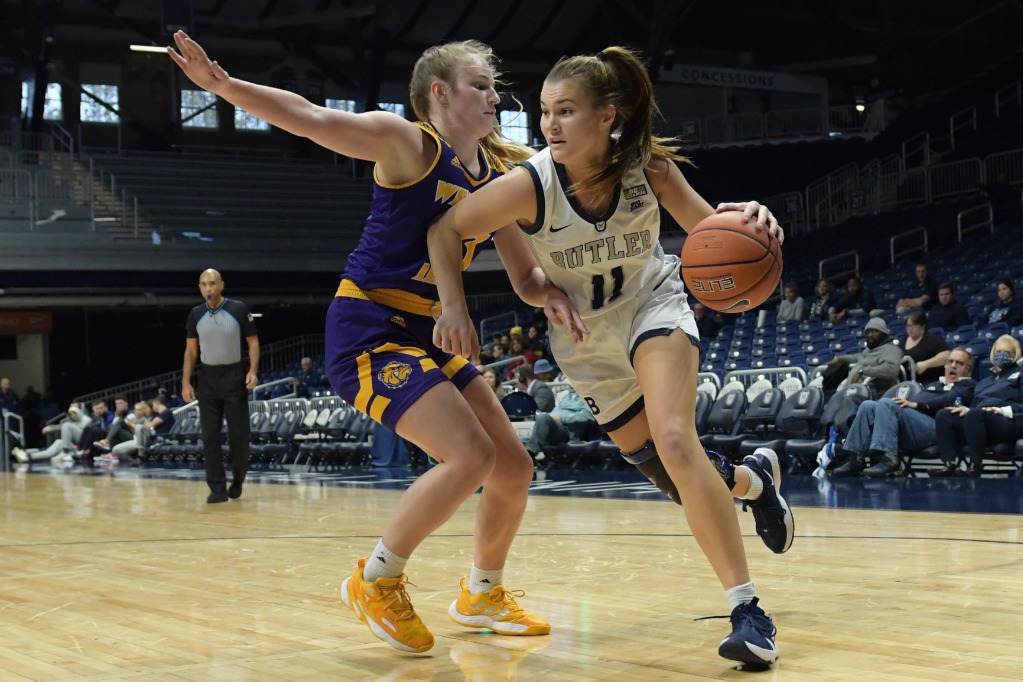 Redshirt sophomore guard Tenley Dowell dribbles past a Western Illinois defender in a matchup on Nov. 13. The Bulldogs went on to lose 46-73. Photo courtesy of John Fetcho.

The women’s basketball team has gotten off to a very difficult start this season. The Bulldogs currently sit at 0-6, and have lost all but one of their games by double digits. Friday night’s Big East-opening matchup on the road versus DePaul will prove to be one of the Dawg’s hardest matchups so far. The Blue Demons have been receiving top 25 votes all season long, and are expected to be one of the top teams in the Big East this season.

Here are some things to know ahead of the matchup:

Who: Butler vs. DePaul University

How to watch: BEDN on FLOSPORTS

Last season, Butler was able to grab a massive win at DePaul on the road to close out the season, upsetting then-ranked DePaul, 86-81, in Chicago. Since that win in early March, Butler has lost seven straight games, and has the opportunity to snap that losing streak in repeat fashion — by upsetting DePaul on the road.

However, the Dawgs will have to do it with almost an entirely different roster. Tenley Dowell, Genesis Parker, Emilia Sexton and Ellen Ross were the only players who played in that matchup that are still currently on the team.

So far this season, DePaul sits at 5-2 overall, with their only two losses coming to top 15 teams, one of which was a 7-point loss to No. 7 Arizona in St. Thomas over the Thanksgiving break. DePaul also has picked up quality wins over Rutgers, Northwestern and Vanderbilt so far.

In order for Butler to be competitive with DePaul, the Dawgs will need to be stellar on defense, rebound well and also have good consistency on offense.

Buckets, boards and bombs from deep

Aneesah Morrow has had a spectacular start to the season for the Blue Demons, averaging 18.4 points per game along with 11 rebounds per game. Butler, who has struggled with rebounding to start the season, will really need to step it up on rebounding in order to have any chance in this game, as along with Morrow, DePaul as a whole has consistently outrebounded their opponents all season.

For the Dawgs, lead scorers Alex Richard and Celena Taborn will need to be aggressive on offense and be willing to make the bold plays that can keep the Dawgs in the game. With DePaul’s high powered offense, Butler will need to find a way to keep up with the Blue Demons’ scoring efforts.

Protect the ball at all cost

Another key for Butler is turnovers. In many of their games this season — most notably versus Indiana — turnovers proved to be the difference between a win and a loss. Butler will need to reduce the number of turnovers, but also find ways to capitalize off of DePaul miscues throughout the game.

While it is never say never for the Dawgs, tonight’s matchup versus DePaul will be an extremely difficult one, and Butler will need to firing on all cylinders if they have a chance at victory.