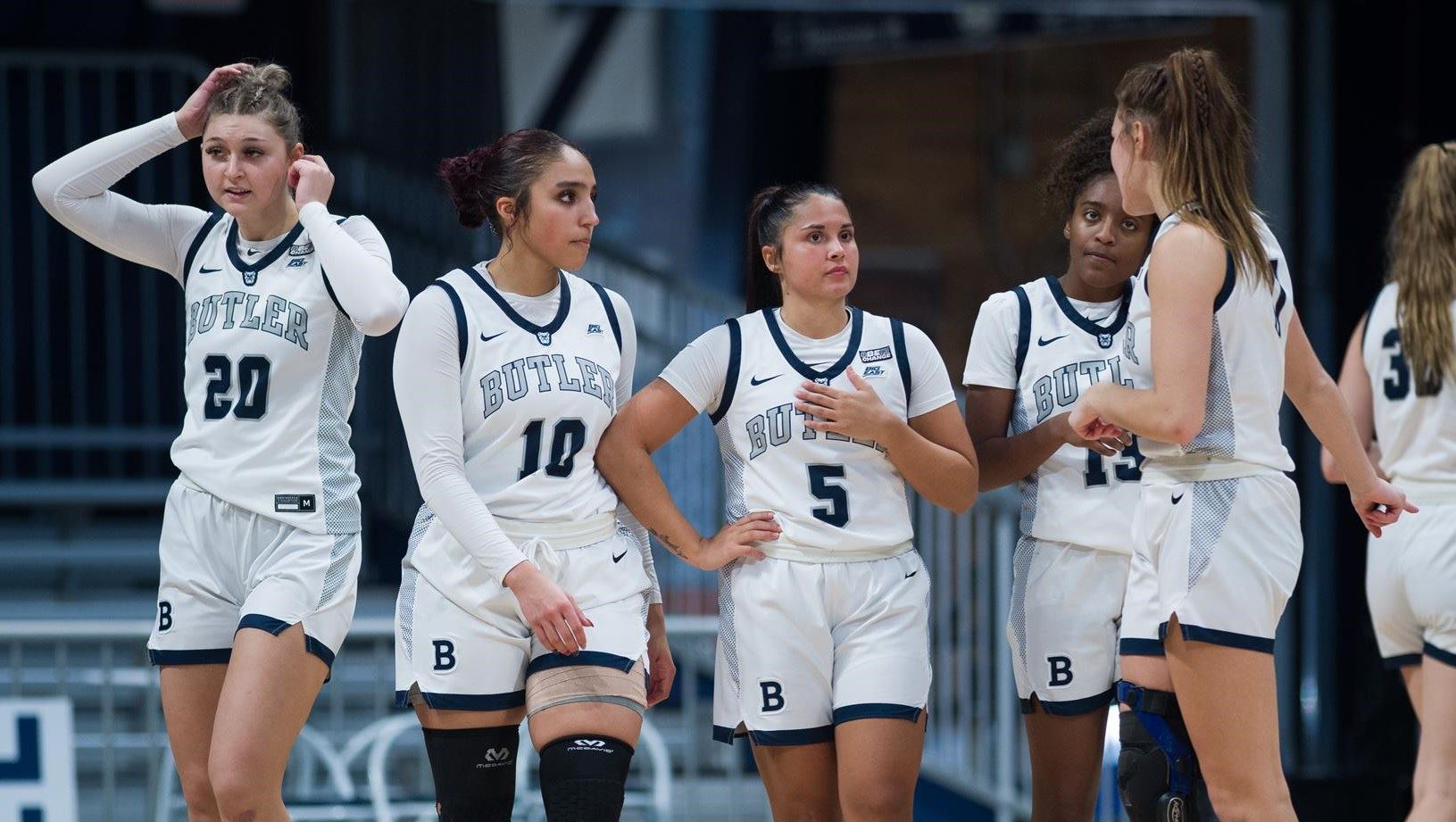 Alex Richard, Trinity White, Emilia Sexton, Zoe Jackson and Tenley Dowell talk during a break in the Bulldogs loss to SIUE on Nov. 23. After losing to DePaul in the Big East opener on Dec. 3, Butler sits at 0-7 on the season. Photo courtesy of Zach Bollinger.

The Butler women’s basketball team fell in their Big East opener on Friday night 101-64. The Bulldogs failed to keep the game within reach after an impressive first quarter. After looking like they could go toe to toe with a very talented DePaul team, Butler reverted back to many of the same mistakes that have plagued them this season.

Butler’s first quarter showed the potential of the young squad. Other than a few unforced turnovers, the Bulldogs played under control which led them to find open shots due to DePaul’s aggressive full court press. Not only did Butler break the press to find themselves layups but they didn’t force themselves into rushed shots. Instead, the Bulldogs were able to force DePaul to play at a slower pace. Freshman forward Alex Richard led the team with 14 points. Fellow freshman Zoe Jackson had 12 points while redshirt freshman Kendall Wingler had eight.

Richard was crucial to Butler’s quick start as she put herself in great positions in the post and found a lot of easy looks. Butler shot 57% from the field and only shot one three the entire first quarter because they were breaking down the DePaul defense so well.

Things began to unravel in the second quarter. DePaul began to get hot and Butler wasn’t disruptive enough defensively. The Blue Demons shot 60% from the field, meanwhile Butler only shot 29%. For DePaul, the hot shooting continued the rest of the game—shooting 61% from the field in the third and 53% in the fourth.

The season ending injury to the Bulldogs on court leader, graduate student Genesis Parker, is becoming more and more of a glaring loss. There has been a huge turnover problem for Butler which has affected their game in all facets. Although it is important to note that DePaul has a great defensive scheme that forces even the best teams to turn the ball over, Butler recorded 31 turnovers. Turning the ball over is no recipe for success and is a big reason why Butler is yet to find a win this season.

DePaul’s style of play was very tough for Butler to overcome. Bulldog turnovers allowed for the Blue Demons to get out and run and find open shots. Those open shots translated to made shots—allowing DePaul to get set in their full court press. Butler then has to break a full court press and, if done successfully, they have to work with a short shot clock.

Offensively, Butler’s low shooting percentage played into the hands of DePaul. Missed shots allowed the Blue Demons to push the pace and start fast break opportunities. Chasing a fast DePaul team in transition for the majority of the game tired out the Bulldogs and made any sort of comeback very tough.

It must be said that Butler’s early season struggles aren’t surprising for a young team. The Bulldogs have shown flashes of what could be a solid team in almost every game this year and Butler did just that competing well with DePaul in the first quarter. The challenge for Butler will be to now play a complete game where they play at the level they know they are capable of.

Butler continues its road trip with a game against Marquette this Sunday. The Bulldogs will be back at Hinkle Fieldhouse on Dec. 10 against Denver.