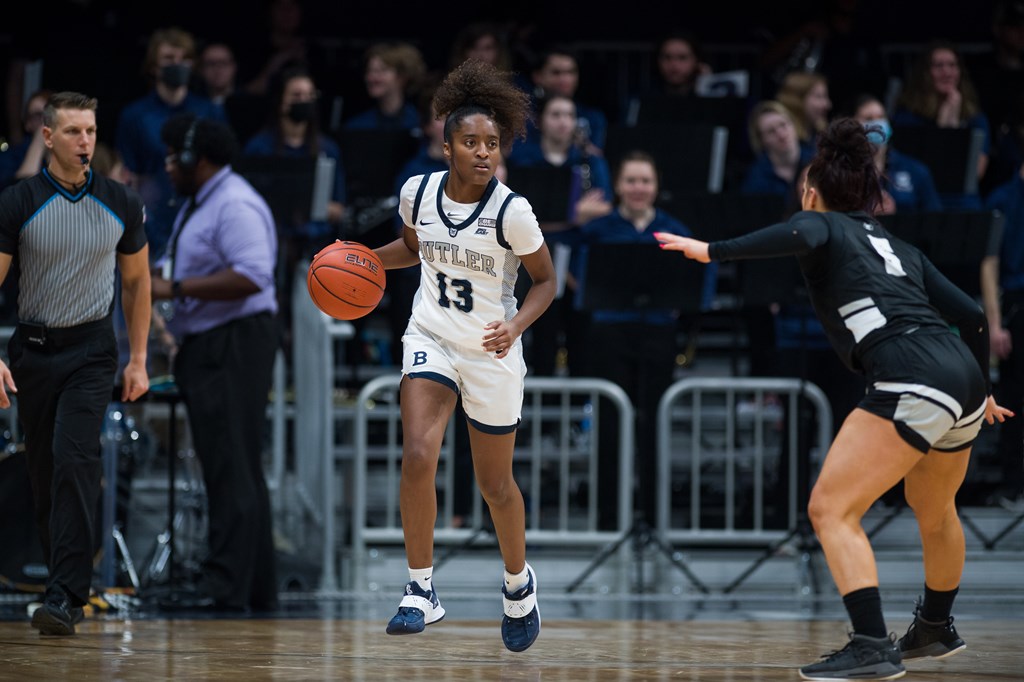 Freshman guard Zoe Jackson dribbles the ball up court in a matchup against Austin Peavey on Nov 20. The Bulldogs went on to lose 65-68. Photo courtesy of Zach Bolinger.

The Butler women’s basketball team fell in quadruple overtime against the University of Denver 94-100 on Dec. 10 in a game filled with amazing plays, spectacular shots and moments that had the whole arena on the edge of their seats.

Things may not have ended up in Butler’s favor last night, but that should not diminish the amazing fight and perseverance that the Dawgs had throughout the game.

Trailing by seven in the fourth quarter, Butler was able to claw their way back and tie the game and send it to a first overtime. After two overtimes of evenly matched basketball, Butler appeared to have a win in sight with a few seconds remaining in the third overtime.

However, Denver guard Indeya Sanders hit a game-tying 3-pointer from deep at the buzzer to send the game to a fourth overtime. From there, Denver remained in control — snatching the game away from the Dawgs and delivering a heartbreaking defeat in Hinkle.

All in all, the game saw 21 different lead changes along with 18 ties — spectacular numbers that haven’t been seen in Hinkle in a while.

Despite the loss, there were many positives shown by the Dawgs throughout the game.

It was without a doubt a career night for Taborn, who was the anchor of the Butler offense throughout the night, and was key in keeping Butler in the game throughout.

Outside of Taborn, Trinity White added 16 points, including four 3-pointers, while Sydney Jaynes added 14 points for the Dawgs.

On offense, Butler improved significantly in several aspects of the game. Butler’s overall field goal percentage and 3-point percentage roughly matched Denver’s percentages — something which Butler has struggled to do this year. Along with this, Butler shot 80% from the free throw line — which was significantly better than Denver — and was a key factor in the game going to four overtime periods.

Despite 20 extra minutes of basketball, Butler only turned the ball over 15 times, a number which matched Denver and is substantially lower than their average. Furthermore, Butler found ways to capitalize off of Denver turnovers, and had more points off of turnovers than Denver did — something they have struggled to do all season long.

However, the main difference maker in the game turned out to be rebounding. Denver outrebounded Butler 55-48 overall, and had 19 offensive rebounds compared to Butler’s 13.

It is crucial for the Dawgs to increase aggressiveness on rebounding down the road, as rebounding can be a major difference-maker — like it was last night.

The loss drops Butler to 0-9 on the season and the team will play University of Illinois in Urbana-Champaign on Dec. 12 in one of their final non-conference matchups.

Despite the loss, Butler showed significant improvement in Friday’s matchup, and should be a source of optimism for the Butler faithful down the road.