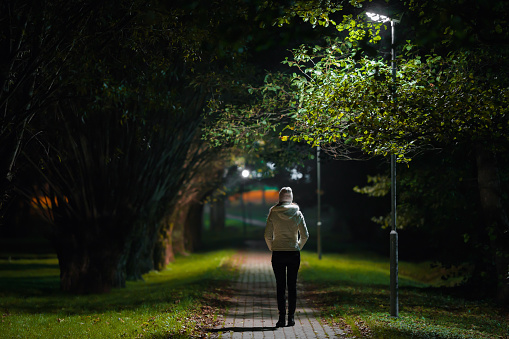 A woman walks alone on a sporadically lit sidewalk. Photo courtesy of Unsplash.

I don’t know about you, but over the past year my TikTok ‘For You page’ has been filled with women’s self-defense keychains. I say women’s because the products are marketed in the most feminine way possible — ranging from such staples as the pink-leopard-themed keychain to the gold-flaked resin cat.

And don’t get me wrong, I buy nearly everything I can in the girliest hues available. The issue isn’t that brands are suddenly branching out to appeal to disproportionately vulnerable demographics; rather, the problem is the consequential increase in the problematic assumptions that surround assaults — blaming the victim and believing that only women can be targeted.

Jen Hallquist, first-year marketing major and fellow pepper spray owner, spoke with me about her own experiences working downtown and the fear that environment often elicits. She especially emphasized that increased attention to reactive strategies frequently misses the point.

“I wish there was… more focus on what is causing people to hurt others,” Hallquist said.

And, frankly, she’s right. Although behavioral studies and prison interviews have revealed countless possible motivators for convicted attackers, these known warning signs are still largely ignored and replaced with an emphasis on being entirely responsible for your own safety.

Shannon Lewand, a sophomore early education major, agreed with this sentiment, but said she questioned the logistical likelihood of implementing programs that could legitimately lessen the number of aggressors.

“On one hand, I think it would be amazing if we could put all the money from making these tools of self-defense into actions of prevention that would actually stop attacks from happening, but on the other hand, I just don’t see how practical this would be,” Lewand said.

To be fair, although new products have emerged, the societal stigma behind being a survivor of this particular form of aggression is a longstanding fixture in society. Before there was such a gigantic variety of tools to use for self-defense, you could really only depend on whatever items you kept with you. In fact, all three women that I interviewed noted that they utilized various additional tactics alongside products designed explicitly for self defense to keep themselves safe in potentially dangerous situations.

First-year biology major Norah Balthazor, the proud owner of a self-defense tool that she affectionately refers to as her ‘stabby stick,’ mentioned that she spent time researching self-defense techniques before coming to Butler, as she was unfamiliar with the area.

“I researched self-defense tactics, the best way to stay alert, what exactly kidnappers … look for in women, then I try to avoid them,” Balthazor said. “If I’m on a late night walk, I’ll be watching for shadows.”

Other personal strategies from the interviewees include turning on your location, keeping someone with you, letting people know when you’re about to leave and when you arrive. Personally, I keep a key between my knuckles, turn on my location for friends and family, pull up 911 on my phone and hover my thumb over the call button, and take special care to have any keys pulled out before I have to actually use them so as to not waste time.So what can we do? For one, we can intentionally look for and identify behaviors that could indicate someone’s potential for danger and start placing blame where it belongs — hint: not on the victim.

We also have a responsibility to change the narrative that surrounds the traditional depiction of what qualifies as assault.

“Currently, I think that women are thought of as needing to be taught self-defense more, but I believe it’s an important skill for both men and women to learn,” Lewand said. “We all need to protect ourselves and we can all be victims.”

What I don’t want to do with this article is discourage you from buying something that could sincerely save your life. If you feel safer with a decked out self-defense keychain, good on you. Buy it in whatever color or style you like — there’s absolutely nothing wrong with that.

But the tendency to assume that any woman who wasn’t actively ready to mace someone was “asking for it” is unacceptable. Moreover, it is constantly perpetuated by the notion that everyone — or at least every woman — is somehow more at fault for the malicious actions of others if they are unable to or choose not to have the tools to fight back at any given moment.

I wish I could conclude this with some foolproof advice to simultaneously protect yourself while not having to feel responsible for things that are out of your control. In all honesty, there’s no perfect solution to this problem, and certainly none that can be magically implemented by a handful of devoted opinion section readers.

But ultimately, all I can say with certainty to anyone reading this is that I want you to be safe and that I’m sorry that so much of that is out of your hands. But a concentrated effort towards advocating for those around you is the first step on a very long journey to stop maintaining harmful stereotypes that negatively impact all people — not just women.