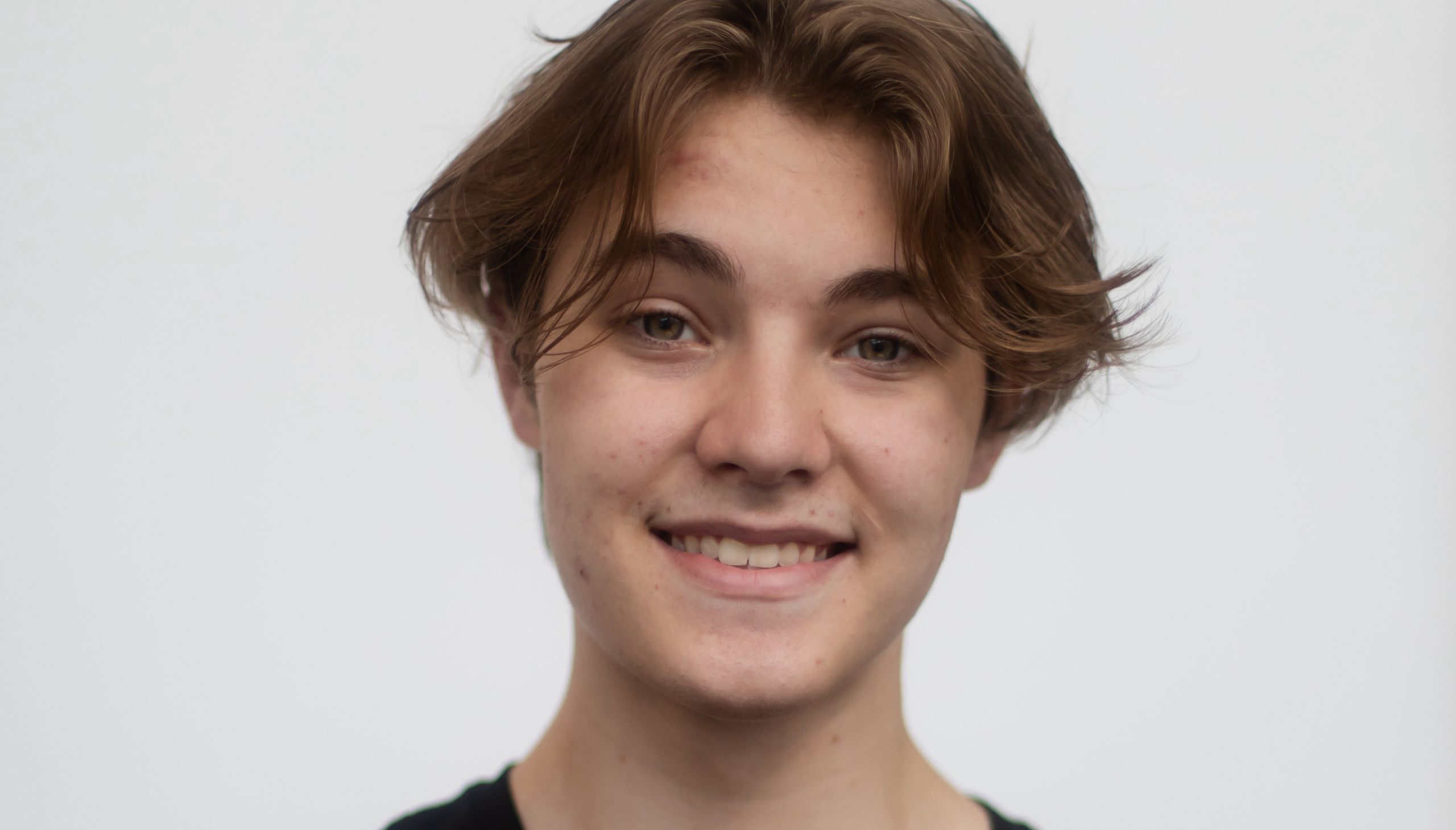 Ethan Kroll shares his ink while discussing the social stigma of tattoos in the dance world. Photo by Lauren Hough.

Tattoos can be an outlet for self-expression, a time capsule to a certain point in one’s life or just a fun way to express yourself. Regardless of their purpose, there has long been a social stigma around tattoos. Ethan Kroll, sophomore arts administration major with a dance focus, shares his approach to tattoos, the stories behind his and thoughts on the social issues associated with them.

The Butler Collegian: How many tattoos do you have?

Ethan Kroll: Three, technically, but one of them is a stick and poke.

TBC: Could you walk me through them? What inspired them?

EK: So I have one on my right shoulder. That’s the stick and poke that I got. It is a small logo of three mountain peaks with three stars around the middle one. And that is from a book series called “A Court of Thorns and Roses” … Those books are really important to me, and I just thought that that should be my first one … And my second one I got just before I came here this year. It is on my right thigh, and it is a symbol called the soul seal from the anime “Fullmetal Alchemist: Brotherhood.” … It represents to me that my soul is tied to this body. And this is all I got, so I have to make the best of it while I still have it. And it was my first large tattoo because the shoulder one was kind of small … I got one on my left hip; that is a 12-legged spider, and that is from the anime “Hunter x Hunter.” And the group that it is based on is the Phantom Troupe, and there are 12 members along with the head. His name is Chrollo. My last name is Kroll, so I kind of liked it … The symbol that Chrollo uses is on the body of the spider, but I just thought it’d be cool because “Hunter x Hunter” is one of my favorites, and it’s just a cool symbol.

TBC: Did you always plan on getting a tattoo, or was this a recent decision?

EK: I’ve always wanted tattoos, but I haven’t had either the money or the drive to actually go out and get one. Now that I’ve actually gotten these three, I absolutely want to get more. I want to decorate my body because why not?

TBC: What was the experience of getting tattoos like for you? Was it painful?

EK: Oh, it was definitely painful. It wasn’t nearly as painful as I was told it was going to be. The one on my thigh and my shoulder were not bad just because there’s a lot more skin and muscle, so those didn’t hurt that much. There’s still some parts where it’s either going over nerves where it hurts, and I could definitely feel it … Overall, it was not bad at all. It’s a little bit of pain, but then you get something really cool forever.

TBC: What do you think about this social stigma around tattoos? Why might they be perceived as unprofessional?

EK: I think it’s a driving force just to divide people. Usually, it’s less wealthy people who get tattoos … I think the entire stigma around tattoos is extremely outdated, and I’m not saying people should get provocative or racist or expletive tattoos everywhere, but if it’s something that’s either artwork, or it’s something that’s important to you, that doesn’t criminalize you or anyone else, that should be totally fine.

TBC: Is there a stigma around tattoos in the dance world?

EK: In general, yes, I definitely think that tattoos aren’t exactly shunned but kind of frowned upon, but I know one of my favorite dancers, James Whiteside has these awesome tattoos, where it’s three big claw marks across his ribs. That was kind of my inspiration for starting to get tattoos because it looks really cool. So I mean, there definitely is a stigma. … But I think there is also a sense of maintaining the idea of ballet and being able to portray the story without having … something that kind of takes you out of the emotion or story.

TBC: What advice do you have for people who are thinking about tattoos? What should people know before getting them?

EK: After care is really important as well as going to a reputable place … My personal philosophy is just go for it as long as it’s not a name or a face of somebody that’s not immediate family. Even then, don’t make it super, super big because something might happen [with that person]. But I think in terms of symbols… go for it. Plan it out and have the foresight to think “What would future me want?”… But also, if it’s something you really really enjoyed and were proud of [at the time], then it can be like a little bookmark in your life.

TBC: Is there anything else you want to say about your tattoos or tattoos in general?

EK: In general, be smart. Don’t skimp out money-wise[… It’s a piece of art that’s on you forever, so plan accordingly. And it’s just pretty cool. I like mine, so I’m happy.