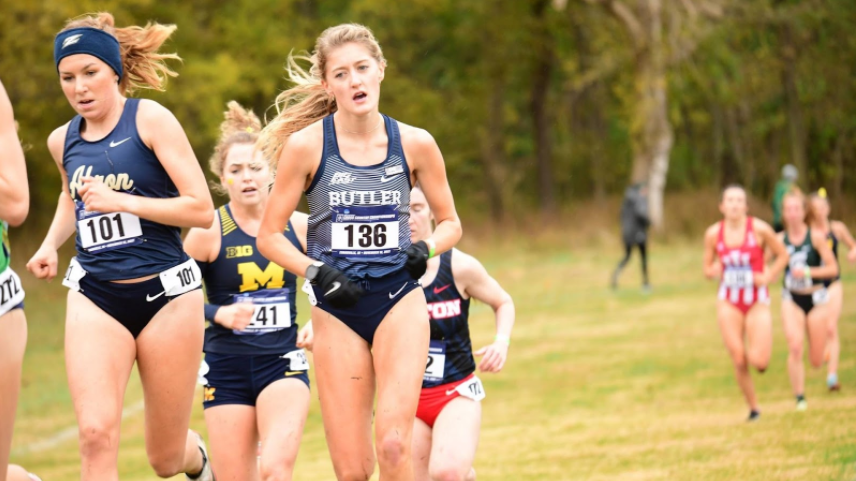 Redshirt Maddie McLain pushes the pace on the final stretch of the race for the Bulldogs against an elite field at the NCAA Great Lakes Regional in Evansville, Indiana. Photo courtesy of Butler Athletics.

On Nov. 20, the Butler cross country team competed at the NCAA Championships in Tallahassee, Florida. The men’s team finished 28th and the women’s team placed 29th.

After taking home the Big East conference and regional individual titles, graduate student Simon Bedard finished his last year of eligibility with a top-60 finish. Bedard crossed the finish line in a time of 29:45:7 at 60th.

Redshirt senior Barry Keane was running with Bedard for the majority of the race until he got a cramp in the last kilometer of the 10K race ultimately finishing with a time of 30:09:6 in 100th. The third runner for the Bulldogs was graduate student Pierre-Louis DeBourte in 186th at 31:02:3.

Rounding out the scorers were redshirt freshman Will Minette and redshirt senior Clark Otte in 196th and 218th with times of 31:07:4 and 31:34:6. Redshirt sophomore Jack McMahon and graduate student Evan Byrne were the last two Bulldog men finishing across the line at 31:56:9 and 32:14:8 in 232nd and 237th, respectively.

In the 31-team field, Butler finished 28th as a team, ahead of Oregon, Michigan State and Furman. Northern Arizona would take home the team title with Iowa State and Oklahoma State taking the next two spots.

On the women’s side, graduate student Kami Hankins led the way in the 6K race, finishing as Butler’s top runner in 119th at 20:37:1. Redshirt senior Angelina Ellis finished directly beside her in 120th with a time of 20:37:3.

Redshirt junior Maddie McLain and redshirt freshman Katherine Olsen rounded out the team placing 234th and 247th in times of 21:54:4 and 22:44:5, respectively.

The Bulldog women finished ahead of Syracuse and Rice in 29th as a team. North Carolina State University would capture the team title followed by Brigham Young and New Mexico University.

The Butler cross country men and women end their 2021 campaigns with both teams competing at the national championship meet in the same season for just the third time in program history.