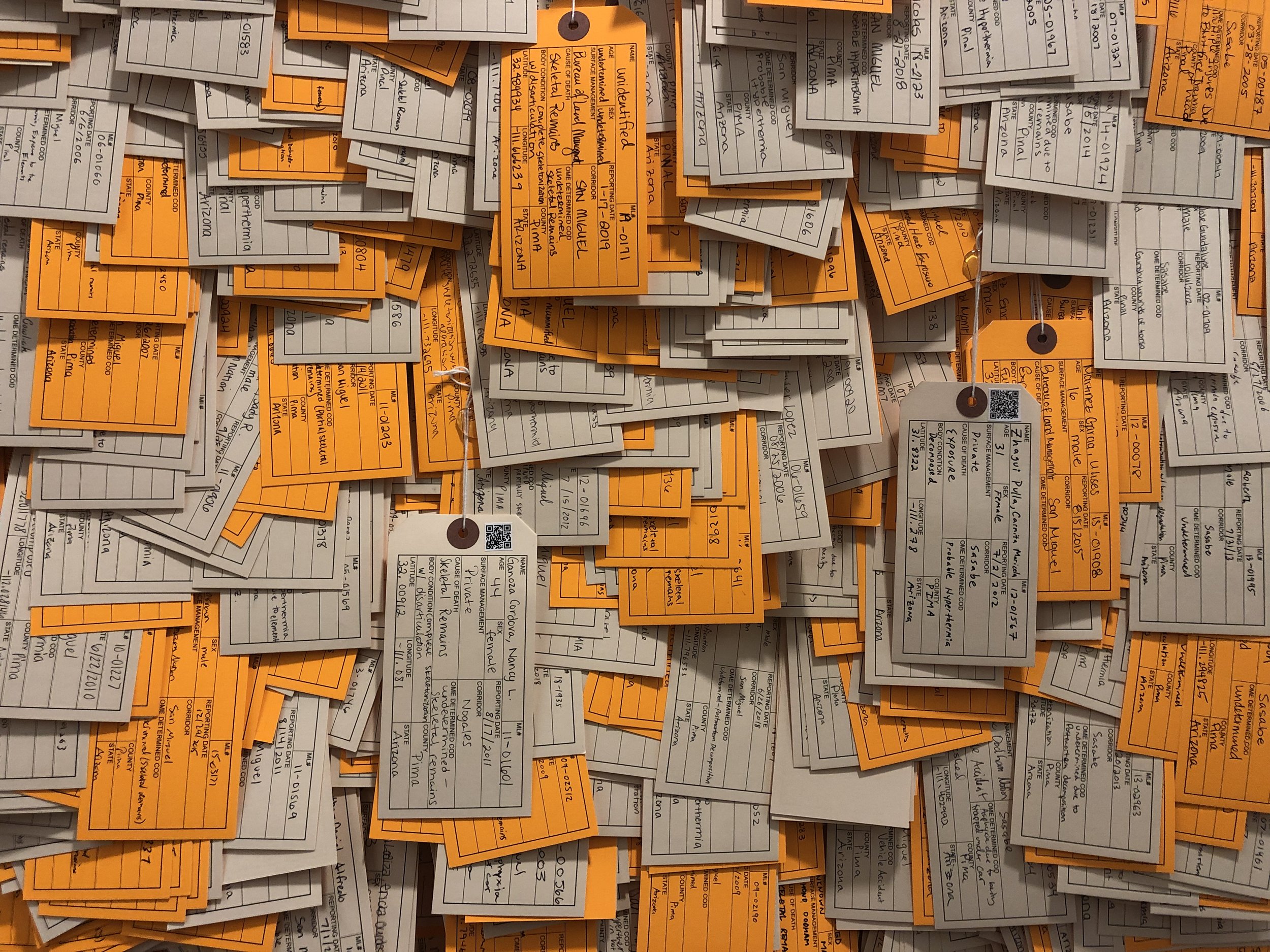 The Hostile Terrain 94 exhibit is making its first appearance at Butler at the hands of its coordinator Christopher Luis Paez Reyna, a senior social justice theory and practice major. The interactive art piece is composed of over 3,200 handwritten toe tags that display the information of migrants who died trying to cross the Sonoran Desert of Arizona between the 1990s and 2019. The tags, color coded as either “identified” or “unidentified,” are pinned on a map of the desert depicting the exact locations where remains were found.

Started by Jason de Leon, archeologist and author of the award-winning monograph Land of Open Graves: Living and Dying on the Migrant Trail (2015), HT94 is part of the Undocumented Migration Project, an initiative to understand the many aspects of unauthorized border crossings. Installations of the exhibit are taking place now at a large number of institutions, both nationally and globally, and will continue into 2022. Locations of the exhibit include the United States, South Africa, Denmark and many more. As of now, according to the project’s website, Butler is one of only three locations in Indiana.

History and anthropology professor Ageeth Sluis applied to bring the exhibit to Butler and, when accepted, asked Paez Reyna to coordinate the installation of the exhibit. Located in Irwin Library, Paez Reyna has put up the map and is in the process of filling out the thousands of toe tags. Paez Reyna said he hopes the exhibit gives the Butler community some perspective on the ongoing issues at the border.

“The idea is that while this is unique to the Southwestern corner of the United States, phenomena like this are happening all across the world,” Paez Reyna said. “The whole idea is that this is not a unique thing, but here’s a representation of what it looks like within your region.”

With the help of volunteers and the students of Spanish professor Terri Carney’s SP320 Service Learning in Spanish class, Paez Reyna approximates that about half of the toe tags have been filled out. As an Indianapolis Community Requirement (ICR) course, Carney said her students have been limited in what they have been able to do in the community due to COVID-19 precautions. With the exhibit being right on campus, and students able to participate, Carney said she hopes her students’ interaction with the exhibit gives them a better understanding and more empathy towards immigrants.

“[The exhibit] rehumanizes a group of people who have been sort of emptied of their humanity as a category,” Carney said. “I hope that my students connect in a real, personal way to what border crossings really are, the deaths that take place [and] the policies that we put in place that are causing the deaths of other human beings … I hope that it personalizes for them issues that are easy to abstract and make theoretical like it’s not really your problem.”

Junior Spanish and biology major Letitia Bortey found the most impactful part of the tags to be the ages. Encompassing a wide range from young children to seniors, Bortey said the younger ages especially impacted her while filling out the tags.

“One of the biggest things I think about while doing this is what their stories were and just trying to in some ways make a connection with these people,” Bortey said. “Especially when we see their ages and they’re 14 or they’re 13, that’s like the age of one of my younger siblings.”

Having crossed the border himself at age eight, Paez Reyna feels a connection to the tags of the HT94 exhibit.  He described a “sinking feeling” when first filling out a tag, realizing the weight of the words on the tag. Jargon like “skeletal remains”, “fully fleshed”, “bullet wound” and “homicide” add to the gravity of each individual tag. In some ways, Paez Reyna said he is oddly comforted to know others’ experiences.

“It’s been kind of isolating to feel like the exception to a group,” Paez Reyna said. “To hear that this is happening to other people, to hear the other people are also experiencing what I experienced, and some of them resulting in fatalities humanizes me and that part of me that I’ve always been trying to engage with.”

Paez Reyna said he hopes to have the exhibit completed by the end of November. Planning to have the exhibit in Irwin through next semester, Paez Reyna is also in the process of hanging pictures and securing a museum-grade showcase to display immigrant belongings in addition to the art piece.