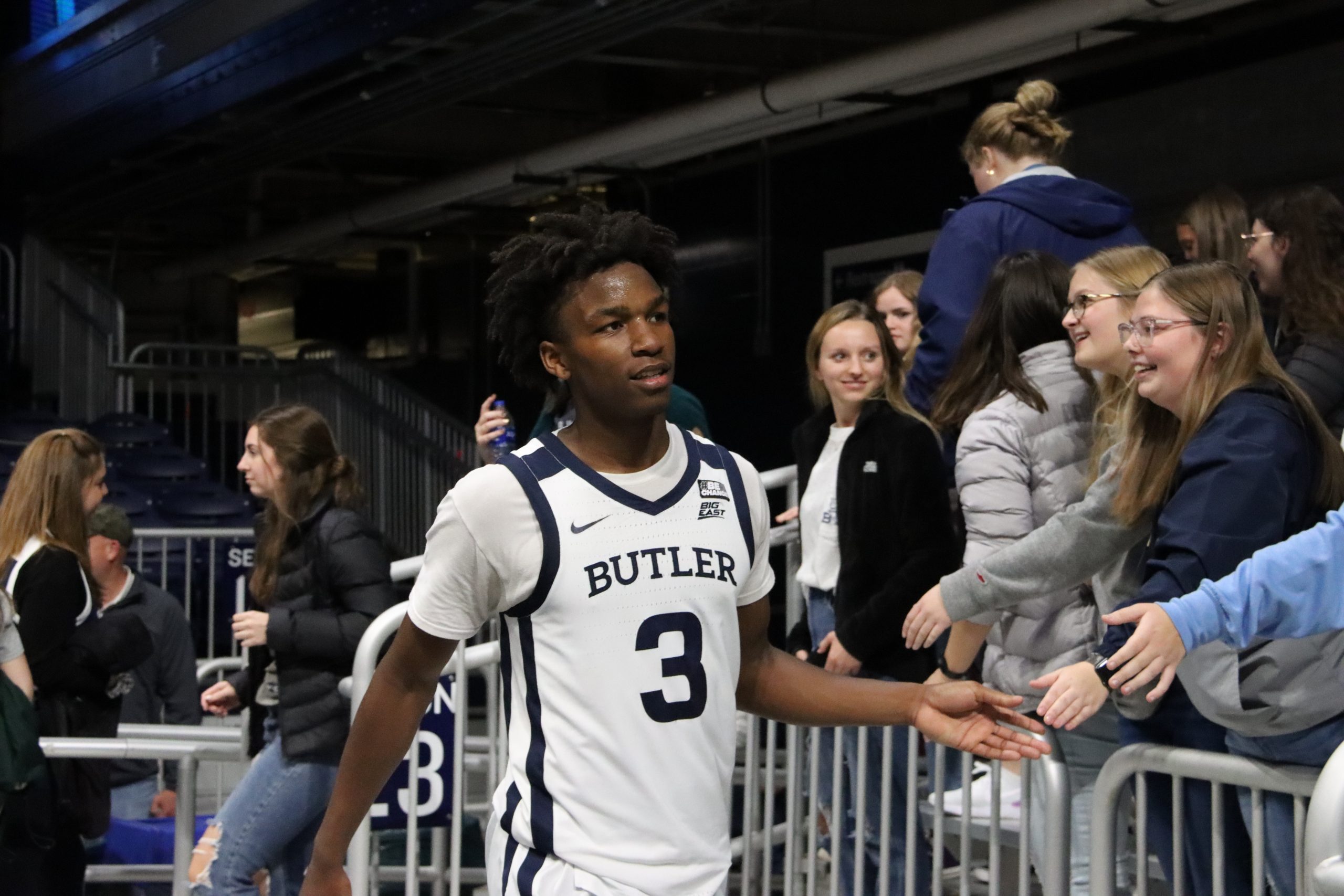 Similar to the first game, coach LaVall Jordan kept a rotation going to get Jair Bolden, Myles Wilmouth, John-Michael Mulloy, Christian David, and Pierce Thomas some minutes. Both Ty Groce and D.J. Hughes did not play again. During the postgame conference, Jordan mentioned that Groce was getting himself back to playing shape health-wise, which may be why we haven’t seen Groce in action yet. On the matter of Hughes getting on the court, it just seems like a regular case of a freshman having to prove to the coaching staff that they’re ready to earn some minutes. It will be worth watching this play out to see if Hughes will decide to wait or redshirt this season.

For the Bulldogs who did see the court against the Greyhounds, they shot a collective 53% from the field and 33% from behind the arc. Let’s go beyond the box score to gather how the Bulldogs look with two games under their belt.

Chuck Harris will remain the number one scoring option

“It was a great feeling to be back on the court,” Harris said after his first game back in the blue and white this season. It didn’t look like he had missed a beat either.

The Bulldogs’ leading scorer last year, Harris proved he will likely assume the role again. He came out hot last night against the Hounds, dropping 15 points in the first half with a perfect 3-3 from the three-point line.

Harris took advantage of one-on-one matchups all night long, showing that he is more than capable of scoring on all three levels. His numbers were not as good in the second half, but that’s mainly because UIndy started to double-team him when he got the ball up top. Even then, Harris was still able to get to the cup a few times and end with 20 points.

Late in the game, Harris showed that he can affect the game without scoring. With four minutes to go in a six point game, he had two huge assists and a steal with 34 seconds left that iced the game. Without putting the ball in the basket, Harris was able to contribute to a win — a promising sight that Jordan will definitely need as the season goes on.

Should these close games be a concern?

There is reason to believe this season will go better than last season. Two early wins are encouraging, but the fact that Division II schools are hanging with us fairly late into games is not something Bulldog fans necessarily want to see.

In the past two games, the Dawgs have won by a combined 15 points. To put this into some perspective, our first big test of the season — Michigan State — has beaten their first two opponents by a combined 57 points.

Butler’s defense, which underwent improvements from the first exhibition game against Tiffin and showed much more intensity, is still having some moments that allow opponents to score easily. Part of that comes with it being early and getting the new guys used to playing with the older guys. Regardless of the source of the problem, it is something that the Dawgs need to and are definitely capable of fixing. Jordan hinted that his team did well adjusting in the second half despite some mistakes.

“In the second half I thought we were putting them on the foul line too much,” Jordan said. “But we did a better job of plugging gaps and recovering. We had some communication breakdowns and [UIndy} did a good job of slipping out of screens and things like that…but there were a number of good things that we saw.”

Closing out on shooters and not getting sucked into the ball on defense were things that the Bulldogs did much better against UIndy. So as long as the Dawgs continue to win and gradually show improvements on defense, these close games should be more a faint warning flash rather than a blaring red alert beam.

With a little less than 10 minutes to go in the second half, Thompson was subbed out for the rest of the game with what appeared to be a leg injury.

After the game, Jordan said that Thompson was just experiencing a cramp and has no serious injury. After hearing some chuckles and smirks around the room, it was clear that if Thompson did have an injury, he wasn’t going to disclose it at the time.

Once Thompson exited the game, a combination of Lukosius and Taylor handled the point guard role. Lukosius, who seems to be making progress as a second point guard behind Thompson, did well in the final 10 minutes of the game. Taylor, whose role looks more like a scorer, did well with differing to Harris while they were both on the court and getting him open looks. Jordan has to be pleased and hopeful for what these two freshmen have the potential to become, not only this season but beyond too.

Former Butler basketball player Roosevelt Jones made his return to Hinkle last night as an assistant coach for the Hounds. As a player, he wrote his name throughout the record books, finishing his career top-10 in starts, assists, rebounds, and steals. The Bulldog faithful welcomed him with an enormous cheer before tip-off and he reciprocated with a thank-you after the game.

“Every time I walk in here, I enjoy it,” Jones said. “[The fans] embrace me with love every time so it’s just a special place. Me and my family are so thankful for what this community has done for me.”

To sum it all up, Butler has some questions to answer and even more bright spots to be happy about. While there isn’t a clear answer on the health of Aaron Thompson at the moment, Butler fans should be pretty hopeful for an exciting season that opens off with the Bulldogs taking on the IUPUI Jaguars at home on Tuesday, Nov. 9 at 6:45 p.m.