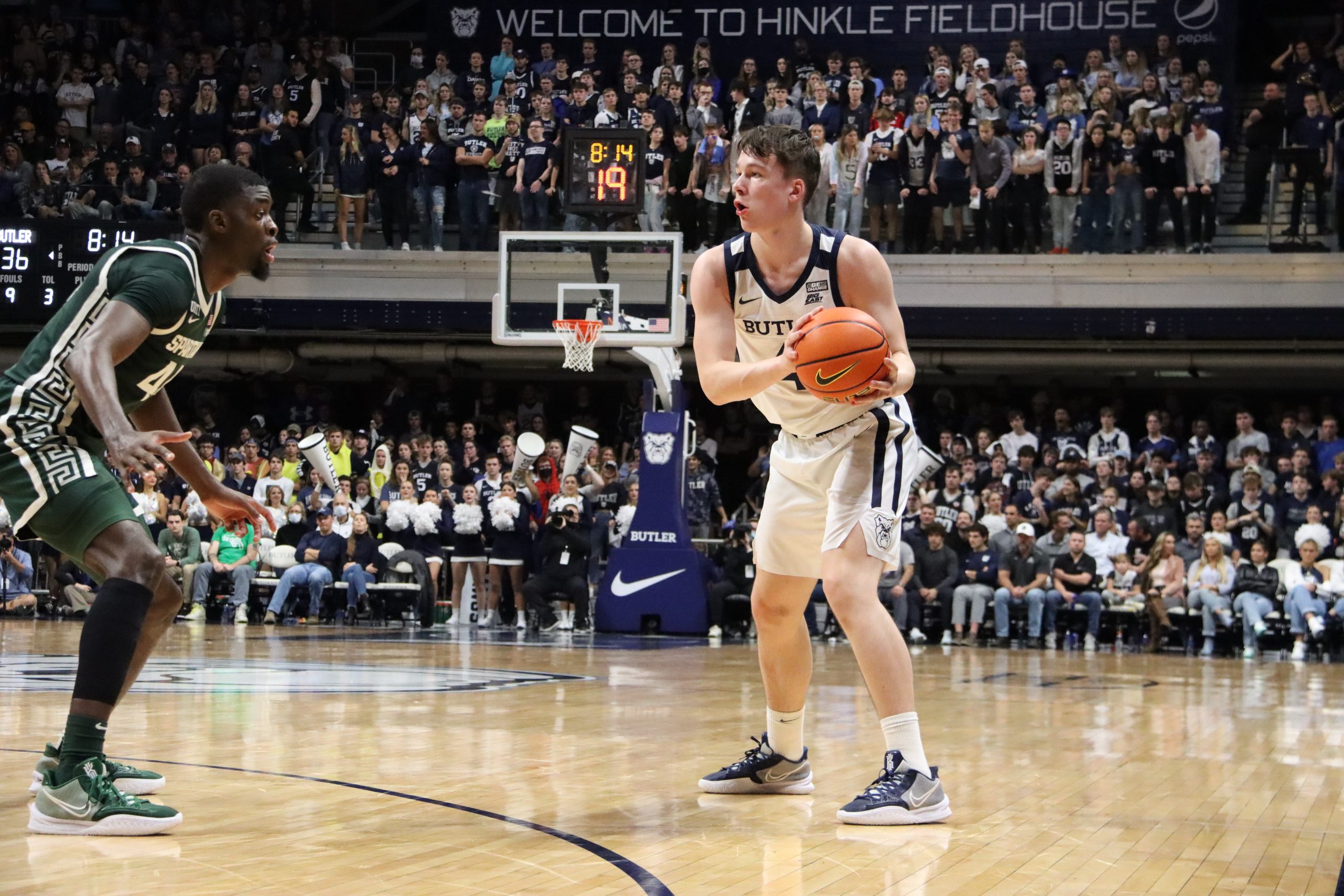 Simas Lukosius looking for a pass versus Michigan State on Nov. 17. Lukosius grabbed four rebounds and had three turnovers versus Texas A&M on Nov. 23. Photo by Francie Wilson.

The Butler men’s basketball team lost 57-50 to Texas A&M in their second game of the Maui Jim Maui Invitational. The Bulldogs have now dropped three games in a row and sit at 3-3 on the season. Jair Bolden led the team in scoring with 10 points off the bench.

Butler had a shockingly bad first half, but like many of their games this season, turned it around in the second. This has been proven to not be a successful way to win games against good teams, so Butler is going to have to find a way to not dig themselves into such a big hole that is so difficult to climb out of.

Let’s go beyond the box score for Butler’s second game of three in Vegas.

What in the world was that first half?

For the first 12 minutes of the game, Butler was playing decently. The Aggies were pressuring the Bulldogs on every pass and shot, but Butler was finding a way to score regardless. With 7:47 to play in the half, Chuck Harris found a wide open Myles Wilmoth for a slam to give Butler a slight 18-17 advantage. Then, the wheels came off.

Over the last eight minutes, Butler turned the ball over nine times, most of which were live-ball turnovers that turned quickly into Aggie fast breaks. Butler had a stretch of 12 possessions where they turned the ball over on nine of them, and the other three they missed the shot. The turnovers were bad, too. Simas Lukosius was extremely sloppy handling the ball, and multiple players passed the ball straight to an A&M player.

Butler didn’t score again until Ty Groce hit a 3-pointer with 39 seconds to play, while the Aggies scored 16 points in that stretch, many of them coming directly off a Butler turnover. Put simply, Butler was lucky to only be down 12 at the break. For a team that prides itself on fundamentals and limiting mistakes, it was a shocking display. Taking care of the basketball is arguably the most important part of the game, and the Bulldogs failed miserably in that regard in the first half.

Some of the blame needs to fall on head coach LaVall Jordan. This was not the first time Butler has had a big problem with turning the ball over this season, and it’s something that the coaching staff clearly needs to put more emphasis on.

A much improved second half

After a half where everything went wrong, the Bulldogs got back to their identity in the second. The team locked in on defense, and despite A&M’s swarming defense, limited turnovers. The team still struggled making shots — shooting just 37% from the field, 22% from three and 54% from the line in the second half — but much of that can be attributed to stellar Aggie defense. If a few more of those shots fell, Butler would’ve walked out of the game winners.

Jayden Taylor was fantastic in the second half, as he and Aaron Thompson were the only players who could consistently get to the rim. Taylor scored all nine of his points after halftime, and helped bring the team to within four points with two minutes to play. With 53 seconds left, Taylor had the chance to have a truly memorable performance when he was found open in the corner, but couldn’t convert the 3-pointer to cut the lead to one. He is not to blame though, because without him, that shot wouldn’t have even mattered.

There were some promising signs in the second half, but the Bulldogs need to put more complete performances together to compete with the better teams, both non-conference and in the Big East.

Next up for the Dawgs

Butler’s next game will be tomorrow night against either Notre Dame or Chaminade — a Division II school — at 9:00 p.m. EST for the last place game. Chaminade will almost certainly lose to Notre Dame, and Butler shouldn’t have too much of a problem with the Hawaiian school if that’s the case. It could be a game to get the freshman like DJ Hughes — who scored his first collegiate points today — and Lukosius playing time to get them more comfortable on the court.