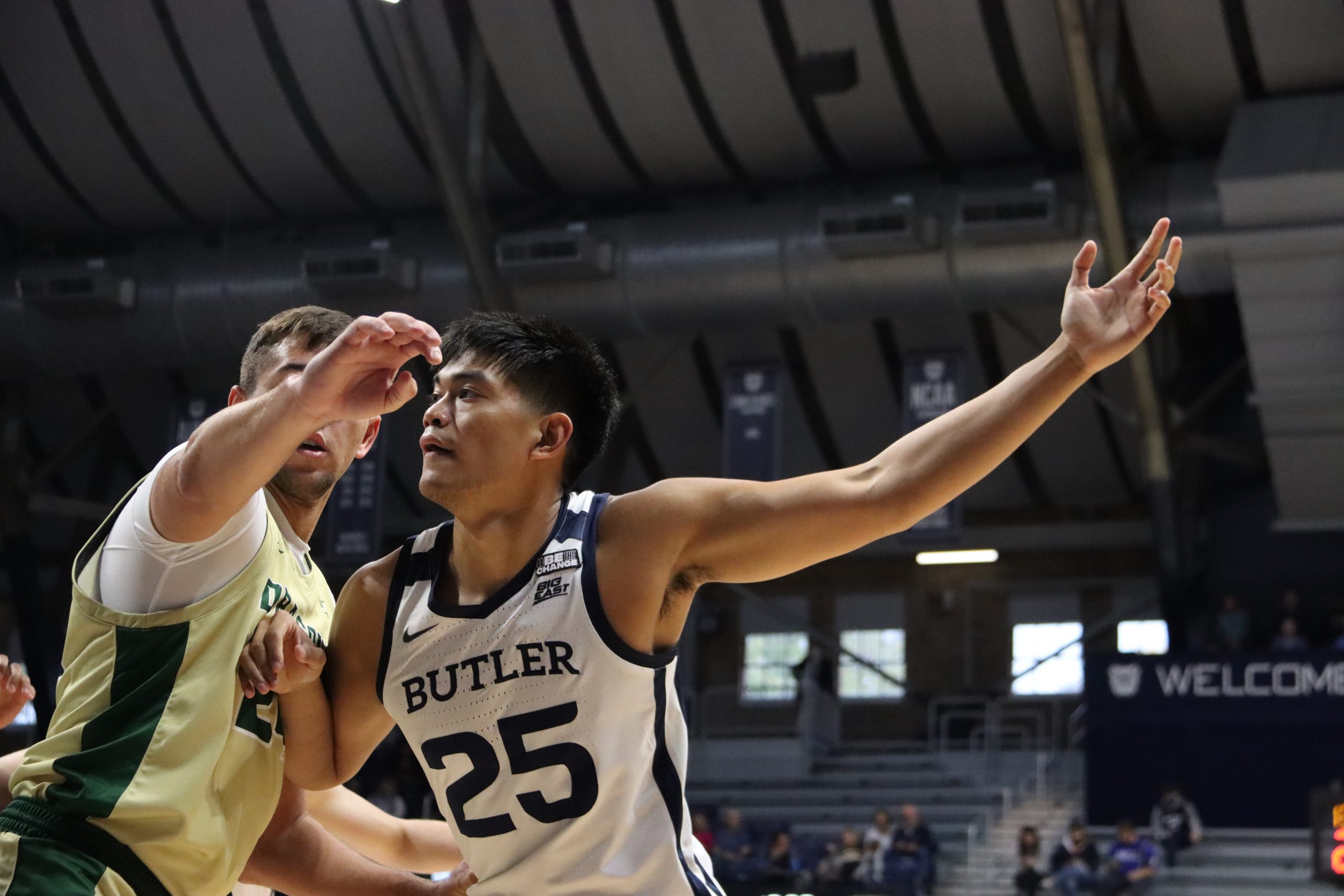 Forward Christian David battles for position with a defender against Tiffin on Oct. 30. Photo taken by Francie Wilson.

Freshman guard Jayden Taylor led the team in scoring with a career-high 21 points. Graduate student Ty Groce continued to produce on both ends of the court with 18 points, three rebounds, two blocks and a steal.

Senior forward Bryce Golden — who had been struggling to score the last three games — looked like himself again with 16 points. Graduate student Jair Bolden also dipped into double-digit scoring with 12 points.

With the win, the Bulldogs hold a 4-3 record as they make their way back to Indianapolis. Let’s go beyond the box score on the Dawgs’ largest win of the season.

No Harris, no problem

A few hours prior to tip-off, it was announced that starter Chuck Harris would not play due to a foot injury. Jair Bolden started in his place. With Harris out of the lineup, the offense made it a point to come out aggressive. The Dawgs started the game on an 18-2 run and didn’t take their foot off the gas the entire game.

Groce led the team in scoring in the first half with 11 points, with Taylor and Bolden right behind him with 10 each. The Bulldogs also shot 64% from the field and 50% from three in the first half, showing early signs that they had finally ended their shooting slump.

Without Harris, it had to be a good sight for head coach LaVall Jordan that Taylor and Groce would be able to take control of the offense. The duo combined for 39 points on 14 of 18 shots. Bryce Golden, who was held scoreless for the prior three games, finally got it going again by being aggressive in the paint and using his large, athletic frame to his advantage against slower big men. The Dawgs will need this version of Golden more often as they wait for forwards Bryce Nze and Bo Hodges to return from injury.

Freshmen showed improvement in their game

As expected, the three freshmen who saw the court all provided solid minutes for the Bulldogs. Taylor not only led the team in scoring but filled the rest of the stat as well. He hit eight of his nine free throws, grabbed four rebounds, dished out two assists, came up with two steals and had a block as well. His aggressiveness on both sides of the ball will only prove to be a valuable asset to the team as he continues to get better.

Simas Lukosious logged his first game of the season without a turnover. In his 26 minutes, he had six points — cashing in both of his 3-pointers — and four assists. Though it came against a lesser opponent in Chaminade, a game like this can only boost Lukosious’ confidence as a passer and ball-handler.

DJ Hughes continued to learn his role on the team in the win also. Adding six points and two rebounds in his 12 minutes on the court, his work ethic and eagerness to be coached will only increase the trust that Jordan has in him.

Up next for the Dawgs

As their trip in Vegas comes to an end, the Bulldogs have a few days of rest before their next matchup against the Saginaw Valley State Cardinals on Nov. 30 at Hinkle. The following week, they will travel to Norman, Oklahoma to face the Sooners on Dec. 7.

The Dawgs will then play Eastern Illinois on Dec. 11 at Hinkle before going down the road to Gainbridge Fieldhouse for a Hoosier basketball showdown against Purdue in the Crossroads Classic on Dec. 18. This will be the last non-conference game of the season and Big East play will begin on Dec. 23 in New York against St. John’s.