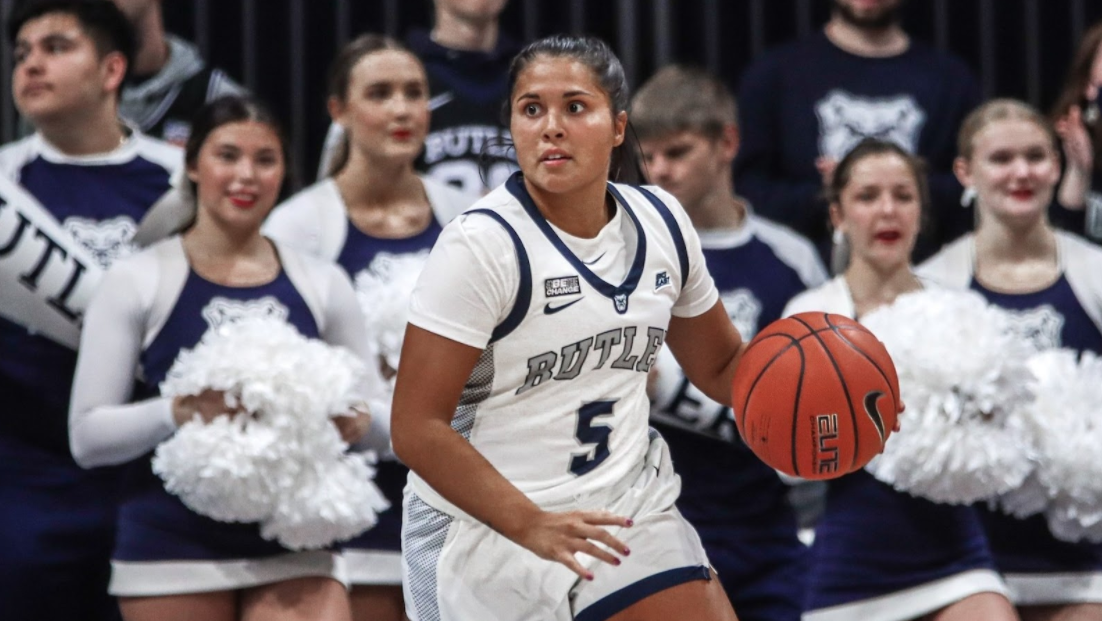 Senior guard Emilia Sexton dribbling the ball down court for the Bulldogs. Sexton put up 14 points in a 68-61 Butler victory over Trine on Nov. 4. The women’s basketball team plays three games in the next seven days. Photo courtesy of Grace Denckhoff.

The women’s basketball team will face the eighth ranked Indiana Hoosiers for their first regular season game. The Bulldogs won their first preseason matchup against Trine 68-61 on Nov. 4. This Indiana battle is set to start at 7 p.m. EST at Hinkle Fieldhouse.

After a tightly contested match that ended in penalty kicks against St. John’s 4-2, Butler moves onto the semifinals of the Big East Championship against Providence. This game will take place at Cooper Field in Washington D.C. at 1:30 p.m. EST.

The men’s and women’s cross country teams will travel to Evansville, Indiana to compete in the Great Lakes Regional. The women’s team finished second in the Big East Conference Championship, as the men’s team captured back-to-back conference titles. Following regionals, any individuals or teams that qualify will race in the NCAA Cross Country National Championship in Tallahassee, Florida on Nov. 20.

The women’s team returns to Hinkle to play the Blue Demons at 11 a.m. EST. The Bulldogs are looking to improve to 15-13 overall and move up to fourth in the Big East rankings with a win over DePaul.

The Bulldogs prepare to play back-to-back games this weekend, their first against the Central Arkansas Bears. The game will start at 6:30 p.m. EST at Hinkle Fieldhouse. The men’s team won both of their preseason games and their home opener against IUPUI in their regular season opener.

The men’s second game in two days is against the Trojans. Troy finished last in their conference last season, with a conference record of 12-16. This game will be at Hinkle Fieldhouse at 8 p.m. EST.

The women’s basketball team will play the Western Illinois Leathernecks. The Leathernecks finished the 2020-21 season 8-16 and placed fifth in their conference. This game will start at 12 p.m. EST in Hinkle Fieldhouse.

The football team will stay at home to play Valparaiso at noon. EST. The Bulldogs are looking to bounce back after seven consecutive losses and get their first conference win against the Beacons in the Battle for the Hoosier Helmet.

If the men are victorious in their semifinals match against Providence, they will move onto the Big East Championship Finals to face the winner of No. 5 Villanova vs. No. 1 Georgetown. The finals matchup will take place at noon EST.

The women’s team will face a tough opponent in Marquette at home, looking to climb in the divisional rankings versus one of the top teams in the Big East. The game will begin at 2 p.m EST.

The women’s team continues their home stretch of games versus Ball State. Butler has won seven of their last 13 matchups against Ball State since 2005. They will play against the Cardinals at 7 p.m. EST.