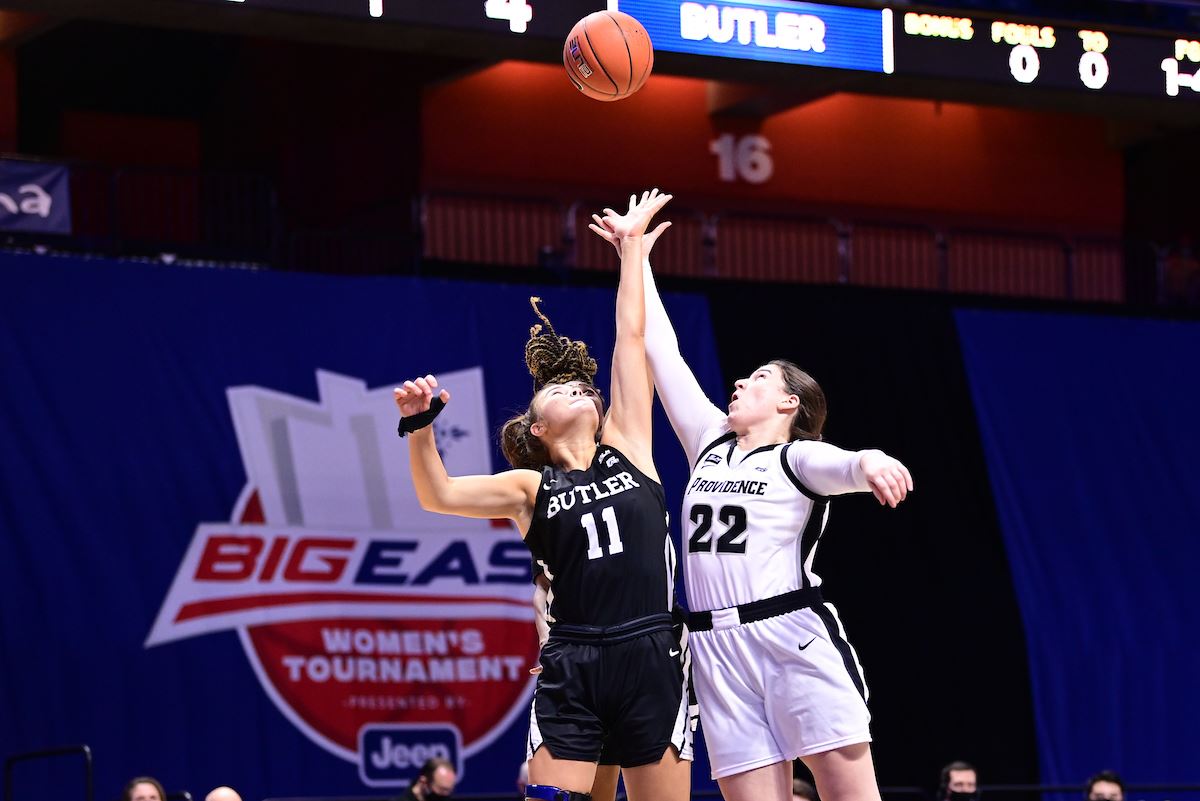 Tenley Dowell goes up for a jump ball in a matchup against Providence during the first round of the Big East Tournament on March 5, 2021. Butler went on to lose 61-63. Photo courtesy of Butler Athletics.

Butler basketball is fast approaching and this season the Bulldogs are ready to improve upon last season. Returning their second most prolific player, Genesis Parker, the Bulldogs’ youth should have no issue improving behind their star guard.

With two major out of conference games against No. 8 Indiana and Illinois, the Dawgs face stiff competition both in-and-out of conference. Regardless, expect the Dawgs to improve behind a young roster sprinkled with veteran leadership in a year where they have nowhere to go but up.

Who doesn’t love a Hoosier in-state matchup? Well, the Dawgs will certainly want the bragging rights when the Cardinals travel to Hinkle for the Dawgs third home game of the year. Promising a big crowd, a tense matchup and a little extra flair — this game is one to watch.

With Ball State not being a particularly strong team and the Dawgs wanting to assert themselves before conference play begins, look no further than the matchup against Ball State for the Dawgs to pick up the win. Since 2005, the Bulldogs and Cardinals have squared off 13 times with Butler claiming seven of the meetings. However, the Cardinals got the better of the Bulldogs back in November of 2019, winning 74-70 in a closely contested affair that left a sour taste in the mouth for the Bulldog faithful. Nearly two years since the last edition of this instate battle, the Dawgs will be hungry for revenge in Hinkle Fieldhouse.

Losing both games to St. John’s last year was unfortunate. However, the Dawgs should be optimistic heading into this matchup at Carnesecca Arena. After losing by just eight at Carnesecca last season the Dawgs should once again clean up from beyond the arc. If they do so, they will comfortably walk away with a win. While St. John’s is not the easiest team for the Dawgs to face, they certainly should not intimidate the team when they travel to Queens in January.

The second Big Ten matchup for Butler this season, this game serves as an interesting matchup for the Dawgs. While Illinois is no small task, they are often the punching bag of the Big Ten. While this game will not make or break the season for either one of these teams, Butler can use this game as a self evaluation as to where they stand as a team.

With easy opponents before and after this game — Denver and Evansville — the Illinois game gives the Dawgs to finish with a trifecta of wins before winter break and build momentum heading into the away rivalry matchup against Xavier.

One of their home wins from last season, Butler battled to a close 50-48 victory at Hinkle. As this is their final home game and regular season contest, the Dawgs have to mark this game as a must win.

Statistically the worst team in the Big East and finishing with the worst record last season, the Dawgs should feel comfortable heading into this one despite the needed victory. With no stats that stand out when compared to the Dawgs, Georgetown shouldn’t be a threat to the home team when they take on Georgetown in Hinkle.

After losing both the home and away games against the Pirates last season, the Dawgs should aim for a home win when they face Seton Hall in February. The third ranked team in the Big East last season, the Dawgs lost both games by 15 points. Interestingly enough, in their second matchup in the Prudential Center, the Pirates shot a staggering 48 percent from the field and a wild 60 percent from beyond the arc. Then in their home matchup, the Dawgs shot abysmally from beyond the arc at 26 percent and shot decently from the floor at 41 percent. Assuming their shooting is cleaned up a bit, there is no reason why the Dawgs should not be able to take one off Seton Hall this season.

Last season, the Dawgs entered Wintrust Arena for their final game of the regular season. Fast forward to the end of the game and Butler had snapped a 20 game losing streak against DePaul winning 86-81. Moreover, the Dawgs took the No.25 ranking away from DePaul heading into the Big East tournament.

It’s safe to say this year’s edition will be just as heated, as the Blue Demons will want revenge and the Dawgs will want to continue their winning ways at Wintrust. It took bench players reaching double digits to pull off the team effort last year, and it will likely take a similar strategy to leave the Demons blue once again. A game that could be huge should they win, Butler will want this one as their away record needs to improve this season if they intend to make a climb in the conference standings.

In a conference that has seen Connecticut’s dominance for so long, it may come as a surprise that Marquette — despite no ranking at the end of last season — finished with a remarkable 19-7 record. Marquette’s well balanced offense and defense provides the Dawgs a tough test as they will have to match up well on both ends of the floor.

Hard to beat at home, Butler will once again rely on their home court advantage to take down the Golden Eagles in January. Undoubtedly yet another circled in red on the calendar, the Dawgs will come out gunning to take one off last season’s second best in the Big East.

The first big test for the Dawgs this season, they will open regular season play at Hinkle against one of the best teams in the country. Other than Connecticut, the Hoosiers will be the toughest opponent all season and what better way to start than with an upset over a top-10 program.

Indiana’s fast and electric play will force the Dawgs to call on the bench as a full team effort is needed. A top 40 scoring offense last season should be a red flag, but Indiana’s defensive stats provide the Bulldogs an advantage to simply try to outscore the Hoosiers. Despite this, defensively the Dawgs will need to be nearly perfect to give themselves a chance against a huge opponent like the Hoosiers. A win here could give the Dawgs a tone setter for the rest of the season.

Always a fierce game, the rivalry matchup with Xavier will be a game to watch as the Dawgs take on the Musketeers twice this year. With the Bulldogs winning the lone matchup at home last year, the Bulldogs look to defend Hinkle once again from the Musketeers. After the matchup at the Cintas Center was cancelled, the Dawgs would love to grab the away win before returning to Hinkle.

In a matchup that is anything but dull, Butler should look to double over Xavier. Moreover this game begins a trio of home games to end the season, so every win will count for the Bulldogs before entering the Big East Tournament. Undoubtedly not wanting to face Connecticut in the first round, this game against Xavier could determine Butler’s postseason matchup.

Undoubtedly the toughest home test for the Bulldogs, the second ranked Huskies have been a figurehead of dominance in the Big East. Last season, the Huskies boasted a remarkable 18-0 record against Big East opponents. Additionally, Connecticut made a Final Four appearance as a No.1 seed.

As we saw last season however — Hinkle magic is still alive and well — and perhaps the Bulldogs can use the underdog mentality to knock off the Huskies. Genesis Parker will have to be on point for the Dawgs as they lost multiple top scorers to graduation after last season. Connecticut boasted the sixth most points in the NCAA last season, so the Dawgs will have to play tight defense and force the Huskies to take low percentage shots in order to pull off the upset. Regardless of any rankings however, never count the Bulldogs out in Hinkle.