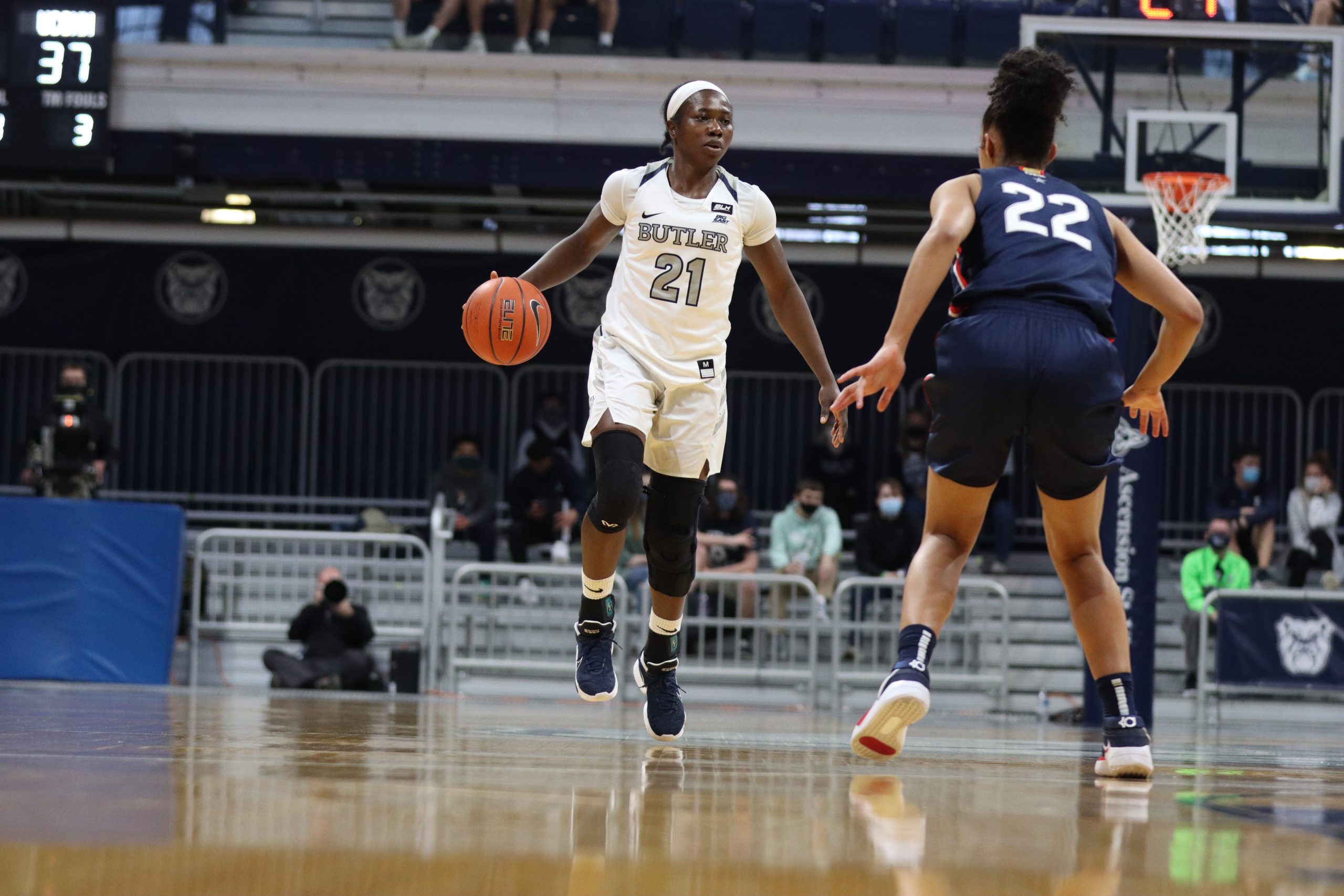 Senior guard Upe Atosu dribbles down the court versus No. 1 UConn on Feb. 27. Two days later on March 1, Atosu dropped 22 points versus No. 25 DePaul in Butler’s first ever win over the Blue Demons. Photo by Xan Korman.

The Butler women’s basketball team pulled off an enormous upset over No. 25 DePaul on the road, winning 86-81. The women’s basketball program has defeated DePaul for the first time in program history, after losing 20 consecutive games to the Blue Demons. It is the Bulldogs’ first road win of the season, and they move up to tenth place in the Big East ahead of the conference tournament.

Atosu has been excellent over the last couple games, scoring 20 points in two of her last three outings after never hitting that mark before in her career. Head coach Kurt Godlevske said she has grown a lot this season, calling her the “heart and soul” of the team.

“Today was a perfect example of her growth this season,” Godlevske said. “Especially in the second half, she made great decisions whether to finish around the basket or to find the open person for threes.”

The Bulldogs started off the game with precision. In the opening two minutes, Butler hit their first three shots, all layups, and hit two more free throws to take an early 8-4 lead. The two teams traded turnovers and missed 3-pointers over the next two minutes of play, before DePaul’s Darrione Rogers hit a three to end the cold streak. Two possessions later, Sexton answered back with a three of her own to give Butler the 11-7 lead.

DePaul was able to score at relative ease the rest of the quarter with 12 points in the final four and a half minutes, but the Bulldogs offense kept up. Junior forward Ellen Ross got on the board off of a nice post move, and Sexton hit her second three of the quarter to give Butler the 16-15 lead with under two to play in the opening quarter. Two Deja Church buckets for DePaul took back the lead for the Blue Demons, but Dowell tied the game up at 19 with a three just before the first quarter ended.

Dowell ties the game at 19-19 with this triple pic.twitter.com/2gXkRNrOaj

The Blue Demons had a great start to the second quarter, coming out of the break on a quick 7-0 run to take the lead. However, Butler’s two leading scorers, senior guard Genesis Parker and Adika, hit two threes in 40 seconds and cut the lead down to 28-25. Graduate transfer Micah Sheetz got on the board about a minute later to cut the lead to just a single point.

Gotta have a hand up, or Parker will make you pay pic.twitter.com/sfS2M3d4WT

Over the next two minutes, the Blue Demons hit three 3-pointers and went on a 10-2 run to take a commanding nine-point lead. Earlier in the season, this was the type of run that would sink the Bulldogs and send them into a spiral. But, this is not the same Bulldog team. Since the second half of the Villanova game on Feb. 16, Butler has played their best basketball of the season by far and have looked miles better than a team with just two wins.

The end of the first half was an encapsulation of this improvement. Over the last two and a half minutes, the Bulldogs went on an 11-3 run to keep themselves firmly in the game versus a nationally ranked team. It started with a 3-pointer from Dowell and an Atosu layup shortly after, both baskets assisted by Parker. DePaul went one of two from the line, then the excellent free throw shooter Atosu showed them how it’s done on the next possession, sinking both her shots from the charity stripe.

Butler forced a turnover with a minute to play, and Adika scored a layup on the other end to put the Bulldogs within one.

Adika takes it hard to the rim for 2 pic.twitter.com/yNB3NpGxB9

On the next possession, Parker jumped a cross-court pass and took it the rest of the way for an easy layup, to give Butler the 40-39 lead just before halftime. DePaul hit a pair of free throws just before half to take the lead back, a lead they were lucky to have.

In the first half, Butler shot 15/30 from the field and 6/13 from beyond the arc, 50% and 46% respectively. The Bulldogs spread the ball out extremely well, and saw five different players score six or more points in the first half. Although Butler slightly outrebounded DePaul on the defensive glass, the Blue Demons had 13 offensive rebounds compared to Butler’s one. This kept DePaul in the game as they struggled hitting shots, shooting just 35% from the field and 24% from three.

Following a great offensive first half, Butler topped it in the third quarter, possibly their best quarter this season. Butler scored 30 points in the period, led by Atosu and Diew who scored 12 and nine points, respectively. The Bulldogs, led by Atosu, were driving to the paint at ease, which not only got them easy buckets in the paint, but allowed Butler’s shooters to get open behind the arc.

Despite DePaul starting to find their shot, Butler still outscored them by six in the quarter, taking a five-point lead into the fourth — capped off by a wild Diew buzzer-beater.

Butler will take a five-point lead into the fourth after this buzzer beater from Diew! pic.twitter.com/Abbdh3SvKA

The fourth quarter was a stressful one to say the least. Butler’s five-point lead quickly evaporated as DePaul’s best player, senior Deja Church, hit a three on their first possession. A Dowell bucket and Diew free throw got the points back, but Butler failed to score a point for another three and a half minutes. Church scored five points in a row for the Blue Demons to tie the game at 73 with six minutes to play in the game. Adika finally broke the scoring drought on a layup through a foul off of a beautiful feed from Sexton.

A mere 15 seconds later, DePaul hit a three to tie the game back up, but Dowell hit her third three of the game on the next possession to take a 79-76 lead which prompted a Blue Demon timeout.

Dowell breaks the tie with this 3-pointer pic.twitter.com/q2lEeVah0L

Church hit a layup directly after the timeout, but Atosu hit one of her own less than a minute later. DePaul went one of two from the line on the next possession, cutting the lead to two.

Over a minute of intense defensive basketball ensued, before Adika hit the shot of the season, a corner three with a minute and half to play to give Butler a five-point lead.

Church hit a layup right after to cut the lead to a single possession. Parker missed a three after draining the clock down to 50 seconds, and DePaul couldn’t capitalize on the other end.

However, DePaul’s signature full-court press came in handy late, forcing a steal off of the in-bounds pass and getting a chance to tie the game. The Blue Demons had three great chances — two threes and a layup — but couldn’t convert, and Diew grabbed the rebound to end those hopes. Parker broke free on the in-bounds at the other end for a layup, and Butler pulled off the upset. In a season that has felt like everything that can go wrong, has gone wrong for the Butler women’s basketball team, something finally went right.

With the win, Butler moves up to the 10-seed in the Big East tournament, and will play 7-seed Providence on March 5 at 2 p.m. at Mohegan Sun Arena in Connecticut. The Friars defeated Butler twice early this season, but have dropped five consecutive games, their most recent loss a 26-point blowout to these Blue Demons. Meanwhile, Butler is playing their best basketball of the season by far. Godlevske said the game will show how much this team has grown since their early struggles.

“We played them so early and when we were still very rusty and coming back from COVID, so I’m looking forward to seeing how much we have truly grown since we saw them last in early January,” Godlevske said.