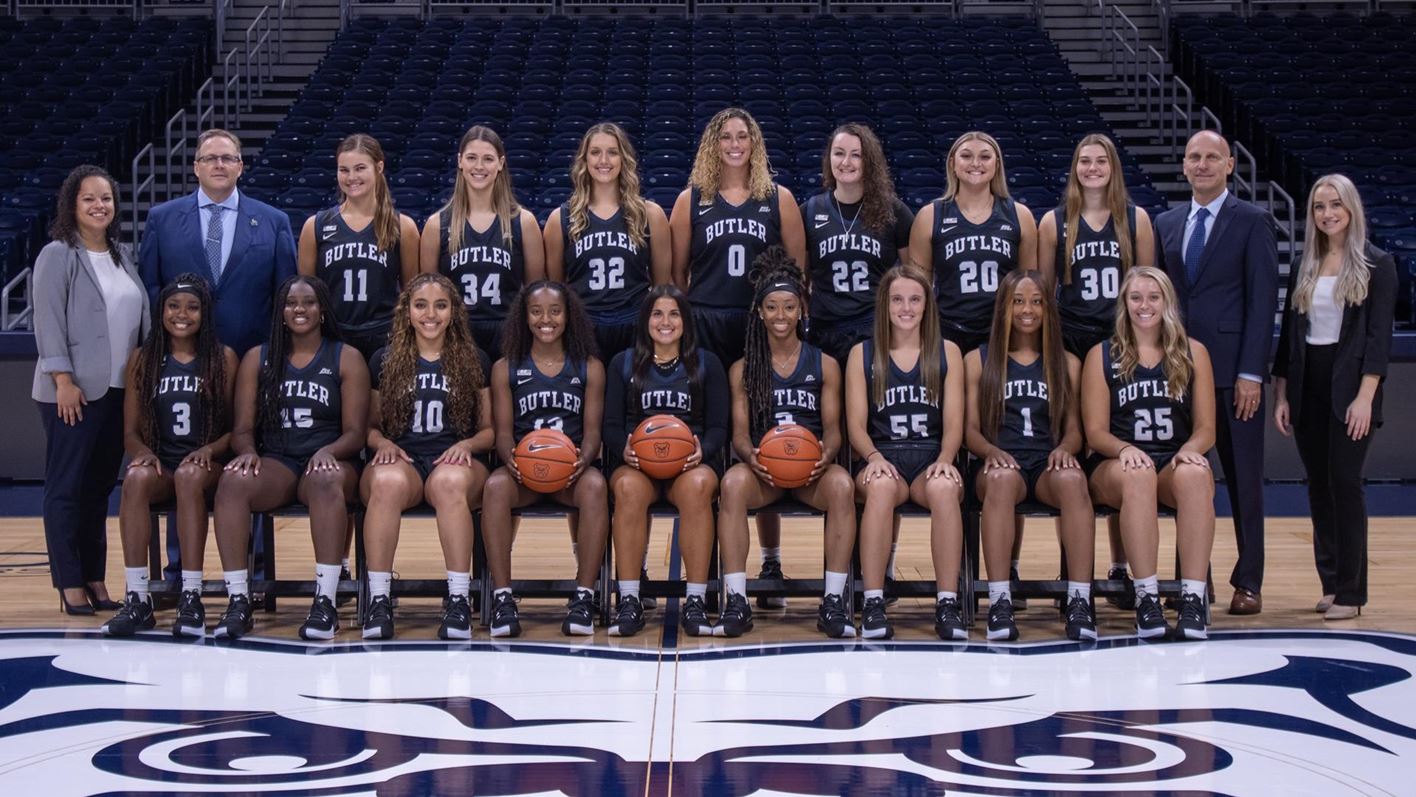 The Butler women’s basketball team will welcome back eight returning players form the 2020-21 season, while adding five freshman and three transfers players to their roster. Photo courtesy of Butler Athletics.

Parker transferred to Butler prior to the 2019-20 season and has since been a pivotal playmaker for the Bulldogs. Last year she was ranked 17th in the Big East conference with a 12.7 scoring average and ended last season with 203 points, 40 rebounds, 18 assists and 15 steals. Parker has led the team in scoring on multiple occasions and will continue to be a crucial source of points for the Dawgs this upcoming season.

Robinson is back and better than ever after opting out of the 2020-21 season due to COVID-19 concerns. She appeared in 13 games in her last season with the Bulldogs sophomore year and will be a player to watch out for this season.

Sexton is nothing short of an absolute bucket from the 3-point line. Last season she was ranked third in the Big East in 3-point field goal percentage, and shot 42% from the 3-point range and 38% from the field. Sexton will continue to be an essential leader and 3-point shooter this season.

Ross played in 19 games last season averaging 16.4 minutes of playing time per game. She finished the season with 39 rebounds, 13 assists, eight steals and seven blocked shots. Ross will continue to be an active force on defense this season.

Toure is back this season after being unable to play due to injury last season. During the 2019-20 season, Toure was named to the Big East All-Freshman team and appeared in 27 games making 20 starts. Toure had a total of 245 points and 165 total rebounds her freshman season and was ranked second in scoring and rebounding on the team. During her freshman season, she led the team in steals and was ranked 45th in the NCAA in steals per game. If this season is anything close to her freshman season, then Oumou Toure will be a driving force and playmaker for the Bulldogs.

Dowell played in one game her freshman season before she suffered a season ending ACL injury. Last season Dowell played in 20 games, making 11 starts. She averaged 4.9 points and 2.2 rebounds per game and ended the season with 44 rebounds, 11 assists and 11 steals.

Dumont is one of the tallest players on the team and played in 14 games last season. She averaged 9.7 minutes per game. Dumont had two rebounds, two assists and two steals in her debut game last season against Providence.

Stoddard played in 12 games last season and averaged 7.6 minutes of playing time. One of her best games last season was against Villanova where she had five points, three steals, two rebounds and one blocked shot.

Taborn attended Furman University where she played in 119 games and started in 74 of them. She shot 63.3% from the field and 66.1% from the free throw line. Taborn is one of the tallest women on the team and will be an essential force when it comes to defense and crashing the boards. Taborn had a total of 591 rebounds during her basketball career at Furman — 302 of them were defensive.

Wingler is a transfer from Eastern Kentucky University where she played in all 24 of their games and finished the season with a total of 262 total points. She led Eastern Kentucky in playing time and averaged 10.9 points per game and 4.1 rebounds per game.

Royal-Davis was a four-year starter and two-year captain at Toledo Christian high school. She was named First Team All-Ohio and averaged 28 points, eight rebounds and six steals per game as she led her team to Division IV Regionals and three conference championships.

Jaynes was a four-year starter at Trinity Lutheran high school where she averaged 15.3 points, 8.8 rebounds, 4.1 assists, 3.3 blocks and 1.1 steals per game. Jaynes was named a 2021 Indiana All-Star after being titled First Team All-State.

White was a three-year starter and four-year varsity letter recipient at McKinney high school where she led her team to the 6A State Semifinals. She averaged 10.8 points and 5.7 rebounds per game as a junior and was a two-time First Team All-District selection.

Jackson was a four-year starter at Allen high school where she averaged 18 points per game last year and was named First Team All-District.