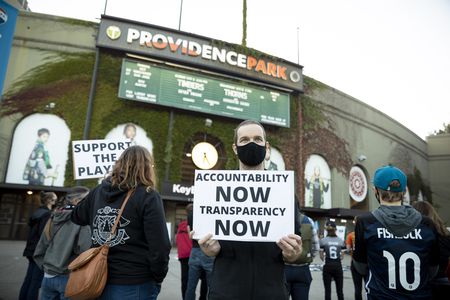 Portland Thorns fans turn into protestors as they support player health and safety outside of Providence Park. Photo courtesy of oregonlive.com.

This story was initially going to be about the Indy Eleven joining the USL Women’s League. A nice, short informative story about the local amateur women’s soccer team taking the next step to a larger organization.

Somehow, my focus has now switched leagues, from the USL Women’s League to the National Women’s Soccer League. It has turned from a simple and sweet story to a story about something far more serious.

The NWSL has been at the center of scrutiny the past several days after numerous allegations of sexual misconduct, coercion and abuse have led to firings of a coach and the resignation of the league commissioner and general counsel.

The domino effect of actions began on Thursday, Sept. 30 after The Athletic published an article where multiple allegations of sexual misconduct and coercion, spanning over a decade, were leveled at North Carolina Courage head coach Paul Riley.

In the article, former NWSL players Sinead Farrelly and Meleana “Mana” Shim cited instances where Riley behaved in inappropriate ways like coercing the two women to kiss each other while he watched and inviting them to a “film session” where he would be wearing nothing but underwear.

The same day the article was published, the Courage fired Riley. Riley has reportedly responded to the allegations against him, claiming they are false. Things don’t seem to be going in his favor, however, as there were at least 10 more athletes who spoke with The Athletic and highlighted some sort of inappropriate action that Riley had done.

Alex Morgan, two-time Olympic gold winner and forward for the Orlando Pride, has been one of the leading voices that are calling for the league to bring about change. In a tweet on Sept. 30, Morgan said, “Mana and Sinead, we support you and are in your corner. I am sickened and have too many thoughts to share at this moment. Bottom line: protect your players. Do the right thing @NWSL.”

The league seemed to hear Morgan’s message loud and clear. The next day, commissioner Lisa Baird resigned from her position, along with the league’s general counsel Lisa Levine. FIFA also announced that it would launch an independent investigation on Riley and the allegations made against him.

While it was a step in the right direction, it seemed a bit overdue, given the fact that there was already an investigation filed against Riley before. While she was a player for the Portland Thorns, and Riley was the head coach, Shim went to the Thorns front office and filed a complaint in September 2015.

A week later, the team informed Riley that he would not receive a contract extension. It seemed like Riley had received some punishment for his actions, until he was offered the head coaching position for the Western New York Flash — known now as the North Carolina Courage — five months later.

This failure of an investigation wasn’t the first or last time that the NWSL had failed to stop emotional abuse or sexual misconduct from happening to its players.

In the league’s nine-year existence, Riley is just one of several coaches and personnel to be fired because of it. In the past year, Farid Benstiti of the OL Reign, Alysa LaHue of Gotham FC, and Richie Burke of the Washington Spirit were all relieved of their duties or resigned because of some type of incident that involved the abuse of players. Christy Holly of Racing Louisville was also fired ‘for cause’ back in August of this year, but the specific reasons for his termination are still unknown.

Since the allegations against Riley have come out, the NWSL Players Association has been working overtime. They put in a request for the games on Oct. 1 and Oct. 2 to be postponed, which was granted by the league. The union also called for the suspension of any league or club staff who have been accused of violating the league’s anti-harassment policy or of failing to report misconduct, no matter when it occurred.

“We refuse to be silent any longer,” the union said in an ESPN article. “Our commitment as players is to speak truth to power. We will no longer be complicit in a culture of silence that has enabled abuse and exploitation in our league and in our sport.”

The NWSL has also finally started to take steps in ending the league’s long problem with systemic abuse. The first step was creating a three-person committee to oversee the league’s front office duties. Amanda Duffy of the Orlando Pride, Angie Long of the Kansas City NWSL, and Sophie Sauvage of the OL Reign will keep things going while the search for a new commissioner begins.

On Oct. 5, the NWSL also released a list of initiatives that are in place to create a better and safer league for its players.

In brief terms, this list includes an independent review of league practices and policies, insertion of new and improved policies, a reopening of the 2015 Riley investigation as well as a full investigation of his entire coaching career in the NWSL, and finally a review of all past and ongoing complaints regarding discrimination, harassment or abuse.

After all that has gone in the past few days, NWSL fans have remained informed on every development and are 100% with the players. Caleb Yonker, a junior sports media major and avid fan of NWSL, said that he wants the league to direct all its attention to their players’ needs.

“Fans are upset about it, but I don’t think that we should be any priority right now,” Yonker said. “The fans are fans, we don’t experience what these players are experiencing. We experience the frustration, of course, but we’re not the ones that are being abused by these managers. So our priority should be put last, the players need to be focused on first.”

The league has partnered with RealResponse, a platform that is also used by Butler, to allow anyone who may have information about misconduct in any form within the NWSL to anonymously report all issues in regard to their health and safety.

These solutions may be severely overdue, but they are steps in the right direction and necessary steps for the players of the NWSL and the league as a whole to begin healing. We should all take the time to commend Sinead Farrelly, Mana Shim, and other women who were courageous enough to speak out about their traumatic experiences. Without them, who knows how long it could have been before things began to change.

I truly believe that the NWSL can recover from this. It will take time for the league and the coaches to regain the trust of the players and fans, but with the right leadership, this can be the end of a long line of wrongdoings and the beginning of a league that truly uplifts women in sports.