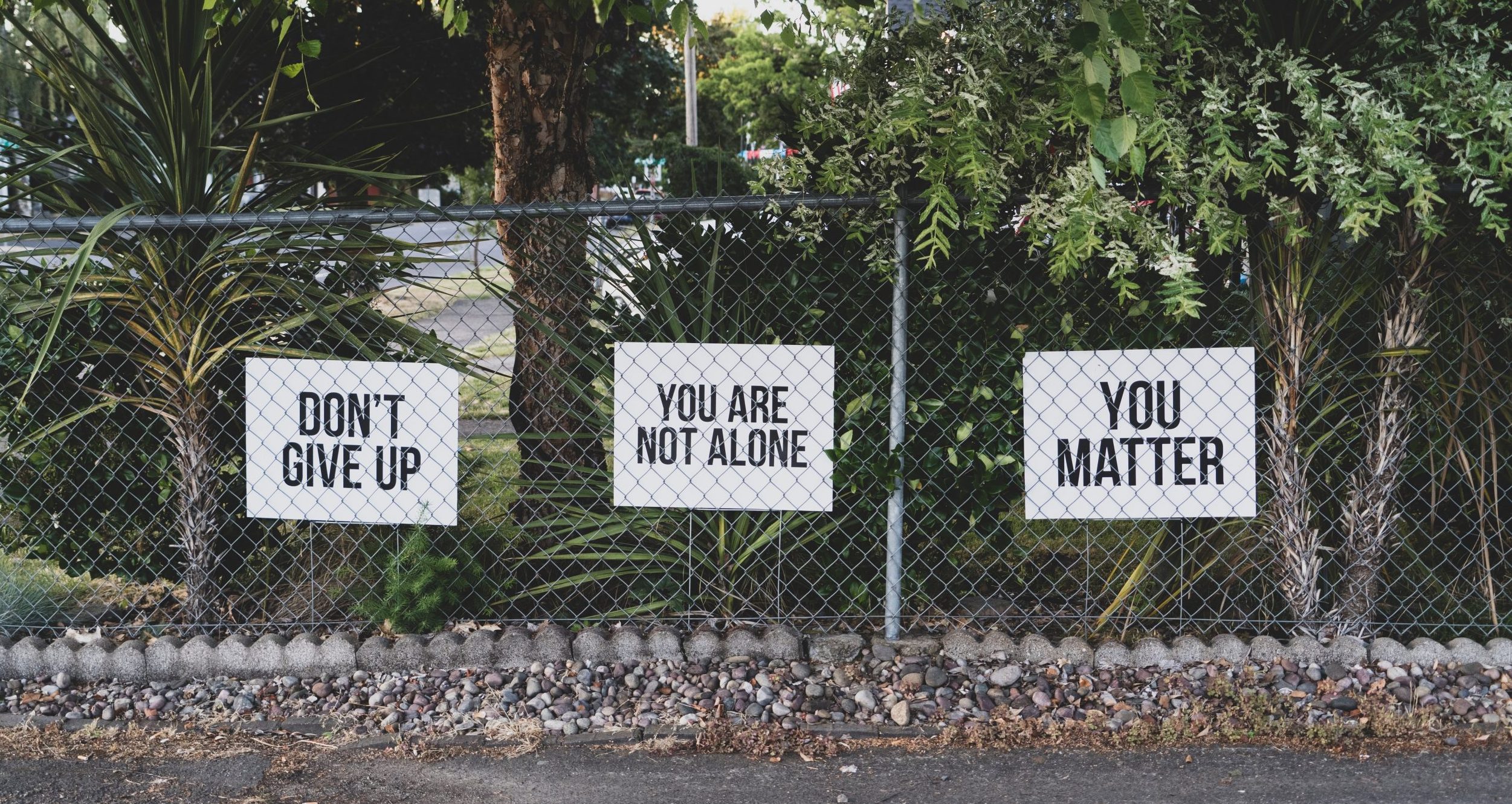 Inspirational messages hung along a fence. Photo from Dan Meyers via Unsplash.

“Things are going to get better…  just hang in there… you’re just being emotional.”

I had heard these responses from friends at Butler, from faculty and from my own parents. But no matter how many times I heard it, and no matter how much I knew that the transition to college would be difficult, I still felt alone, and I could feel that my mental health was slowly slipping.

Even though I felt isolated at the time, I know so many students have felt the same way that I did.

Psychology professor Pamela Ortiz said that college can be tough on first-years mentally, as  living by oneself for the first time is a huge obstacle that can be difficult to adjust to.

Growing up as an only child, I was not used to being away from my parents, and coming to campus made me realize how dependent I was on them. Before college — believe it or not — I had never even done my own laundry before. Going to college felt like jumping into the deep end as a beginning swimmer, and I started drowning almost immediately.

I felt my personality changing. The once happy, bubbly Genevieve seemed to be gone, and my nonstop positive energy was replaced with constant negative thoughts. I had never had mental health problems before, and suddenly, I was having anxiety and borderline panic attacks every single night. I felt afraid. I didn’t know what to do.

When I brought up these concerns with people, I felt like they didn’t understand the severity of what I was going through. People kept telling me to “just give it time” and to “try to be more positive,” but those platitudes cannot solve a mental health issue.

I wish people knew mental health isn’t something you can ignore.

Ortiz believes that when students are struggling with mental health, they should seek help, whether that be going to Health Services, or reaching out to trusted friends or faculty members.

Although I did eventually seek help from a Butler mental health counselor, the invalidating phrases that are commonly thrown around in regards to mental health made getting help more difficult for me. I still felt like I was being weak and overemotional.

By acting like mental health problems will go away on their own, people will internalize their problems, which could only worsen their mental health. According to Forbes, 45% of individuals with a clinical-level mental problem do not seek professional help in the United States. And unfortunately — unlike if someone had a visible injury — poor mental health can be invisible at times.

After dealing with my own personal struggle with mental health, I started to notice that I wasn’t as alone as I originally thought. When I started to be more observant, I noticed so many students around me discussed feeling unlike themselves and feeling depressed. A couple people mentioned that they were prescribed anti-anxiety medication like I was.

Although it’s good to know that many people trusted me enough to open up about these difficult topics, I can’t help but wonder why we as a society minimize mental health issues and why it is considered weak to get help for them.

From talking to my friends, I realized that gender norms may play into why some students struggle in silence with mental health.

First-year exploratory studies major Adam Belinson believes that a reason why many male students suffer from mental health problems is because of societal norms which dictate that they should bottle up their emotions. He said that in our culture, men are expected to be strong, and therefore are discouraged from showing sensitivity or weakness. This concept is more commonly known as toxic masculinity, a huge contributor to mental health crises for men around the world.

Belinson believes that regardless of gender, people should feel free to discuss their problems and emotions with others. I would go even further to say that people need to. Discussing feelings and emotions is critical so that people can get the help they need — even if it’s just getting advice from a friend.

The problem is people are afraid of being judged, and I can totally understand that. In the past, when I’ve opened up to people, I have been told that I am “overreacting” or told that I need to calm down.

This is not a helpful approach because first, telling me to calm down will guarantee that I won’t calm down. Also, it’s incredibly disrespectful because it invalidates my problems and emotions.

First-year exploratory studies major McKenzie Call has noticed that women often are told that they are overreacting in situations where they are being vulnerable. She said she feels upset when people tell her she is being overemotional.

“So, I get really angry or really upset, and I try to express those emotions and I’m being told to calm down,” Call said. “It kind of feels like I am being silenced.”

That right there is the problem — being silenced. When mental health can feel like a silent battle of its own, it feels even worse when someone else makes you feel like your emotions don’t matter.

We need to be accepting of others’ mental health problems, and we need to allow people to use their voices. No matter how insignificant someone’s problem may seem to you, you never know how it could be affecting them.

If you aren’t in someone else’s shoes, you have no idea what they may be feeling or experiencing.