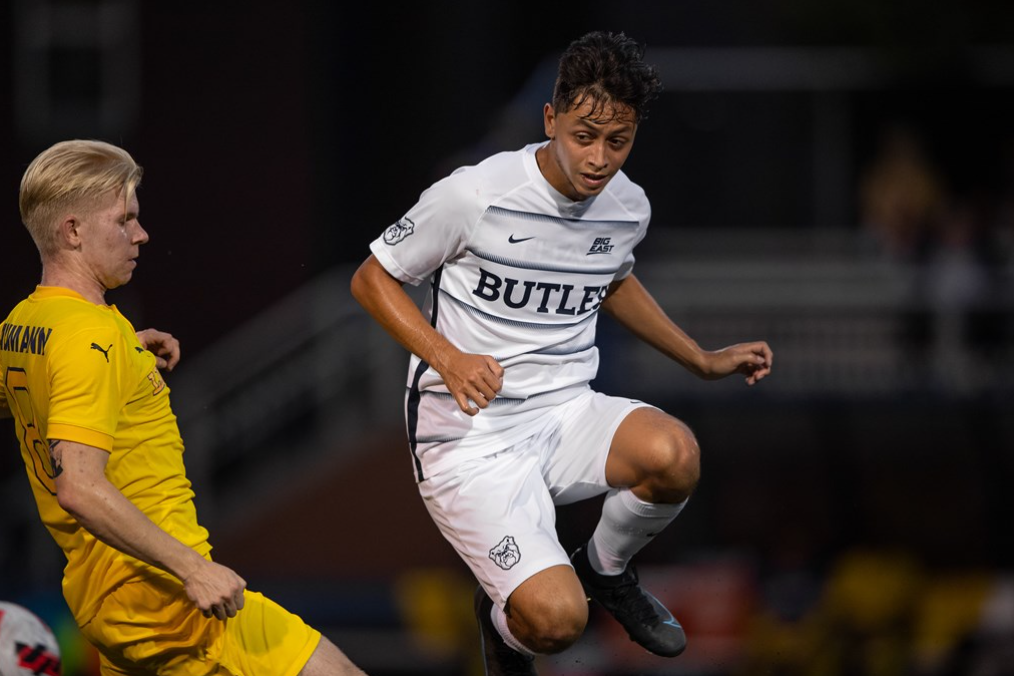 Butler forward Wilmer Cabrera Jr. tries to make a play on the ball in the match against Lipscomb on Sept. 23. Photo courtesy of Butler Athletics.

The Bulldogs suffered their seventh loss of the season to the hands of Seton Hall on Oct. 27. The somewhat bizarre match featured five goals, late referees, a malfunctioning scoreboard, and a blackout at the Sellick Bowl.

All five goals were scored in the first half beginning in the fifth minute. Seton Hall’s sophomore defender Mark Wailer headed in a close-range cross from junior defender Denis Kelmendi.

After conceding first, the Bulldogs responded just nine minutes later. The play started with senior midfielder Rico Hollenkamp who crossed in a ball that found redshirt senior defender Rhys Myers’ head. The header went back across the Seton Hall goal which allowed freshman midfielder Quint Breitkreuz to touch the ball to fellow midfielder and redshirt sophomore Tommy Visser for an easy tap-in goal.

Less than three minutes later, Butler carved open the Seton Hall defense to give themselves the lead. Junior forwards Wilmer Cabrera Jr. and Hemi Nasser combined down the middle of the field to create an open shot for Cabrera Jr. who slotted the ball one time low and into the corner from the penalty spot with composure.

Butler’s lead was short-lived as the Pirates converted on a set piece free kick to level the score. Kelmendi served in an in-swinging cross from the right side of the 18-yard box and senior defender Luca Dahn found the back of the net with a header.

Then with about ten minutes left in the first half, in the middle of play, the lights at the Sellick Bowl went out. Because this game was supposed to take place earlier in the season but had to be rescheduled, the facility lights were not set to stay on for the optimal amount of time. The blackout forced both teams back into the locker rooms for an extended period of time. Around 20 minutes later, the lights came back on and the teams began a short warm-up before play resumed.

The inadvertent stoppage seemed to favor Seton Hall who were able to take back the lead before half. Junior forward Andrea Borg made a darting run with the ball through the Butler defense getting himself all the way to the endline before he pulled back a cross to sophomore forward Mans Saebbo.

Much of the second half was spent in the Pirates end as Butler tried to find an equalizer. The opportunities were there for the taking, but the Bulldogs couldn’t find the lethal final ball.

Seton Hall changed formations to a five back system with about 20 minutes to play to combat Butler’s offensive pressure. For the remainder of the game the Pirates held a solid defensive shell with all 11 guys behind the ball. Seton Hall’s game management down the stretch was tough for Butler to overcome. The Pirates were breaking up play, taking their time on each dead ball and hitting the Bulldogs on the counter-attack.

The Bulldogs will look to turn things around for senior night this Saturday, Oct. 30 at the Sellick Bowl against Creighton.