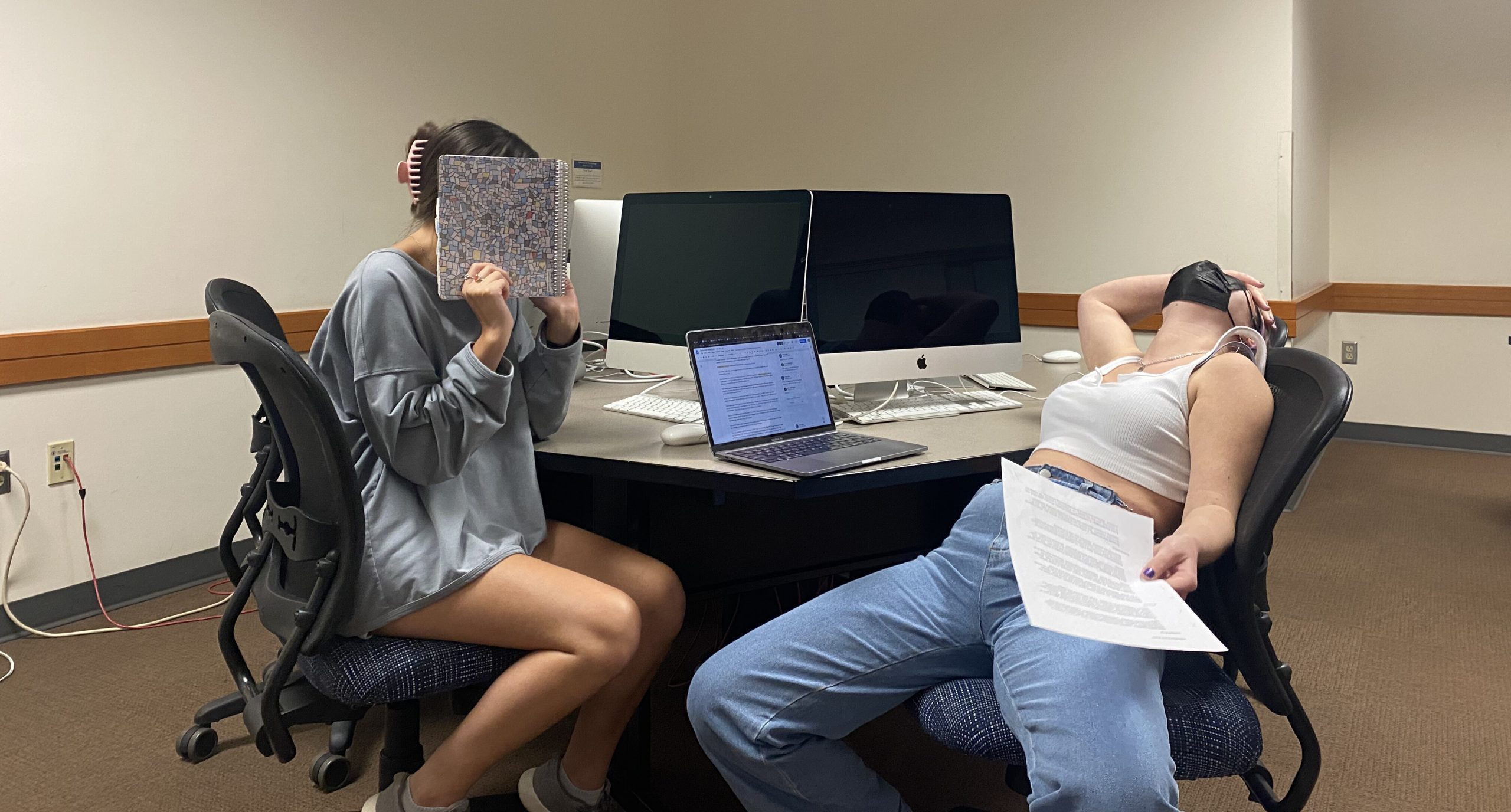 Opinion co-editors, Katie Freeman and Caitlin Segraves, try to demonstrate the stress and pressure placed on students’ grades. Freeman continued to stay up all night — after publishing this article — to try and earn a good grade on an assignment. Image by Presley Fletcher.

And you know what? That’s okay.

Coming into Butler, I hadn’t been invited to join the honor’s program — not that I particularly wanted to — and I took it personally. I had the goal of graduating with a 4.0 GPA. I had something to prove: the validity of my own intellectual prowess.

That dream was crushed by my inability to distinguish between the preterite and imperfect tenses in Spanish, and I ended my freshman year with my first A-.

It came as a huge blow to my confidence and self-worth. If I didn’t have a 4.0, how would people know I was smart? If people didn’t consider me to be smart, would they even value me at all?

I considered myself to be a smart girl, and I still do. The world didn’t stop turning when I got that A-, and it didn’t stop when I got my first F on an assignment, either. Between internships and on-campus involvement, I have so many things going for me, and none of them are impacted by the grades I have received that happen to be lower than an A.

That’s the thing — grades do not define your worth.

I understand wanting to get an A — I still strive for them myself. However, it’s more so about realizing that not getting an A does not equate to failure or inadequacy. Doing your best is truly good enough because if you do that, your best will never stop improving.

Another thing — failure is not as horrible as it seems.

Failure is not permanent. It teaches you valuable lessons and helps you grow into a better, more capable version of yourself. Nobody is perfect one hundred percent of the time, so learning to pick yourself up whenever you fall is an integral life skill.

One more thing — each individual’s definition of failure and success is different.

Everyone sets different goals for themselves. What one person may consider a personal best may very well be another person’s average, and that is okay. Everyone’s situation is unique.

The hardest part, at least for me, comes from comparing myself to others. On this campus, it is downright impossible not to. It seems as though everyone has been elected president of four clubs while managing to turn in every assignment the moment the instructions leave the professor’s lips.

Even scrolling through LinkedIn sends you to an alternate universe in which everyone you know has interned at Eli Lily or Salesforce and is now so thrilled to announce that they already have a job lined up for post-grad life. I don’t particularly want to intern or work at those places, but I can’t help feeling like I should have for the sole reason that other students did.

It feels as though there is so much pressure to be a perfect, over-involved student, which is why not holding yourself to someone else’s standards is so important. The whole point of college is to get in a position where you can comfortably start your career, and everyone is on their own individual, customized path.

In the real world, you either sink or swim.

Swimming isn’t measured by grades. It’s measured by how much you strive to continually improve yourself, and you can’t stay afloat if you aren’t constantly putting in effort. Even a light doggy paddle is enough to keep one from drowning.

I’m not advocating for students to stop striving towards their best — I’m just saying that you won’t die if you don’t get straight A’s or land a spot on the dean’s list. As a reminder, your GPA takes up the most minuscule portion of your resume.

Give yourself some grace. You’re doing just fine.