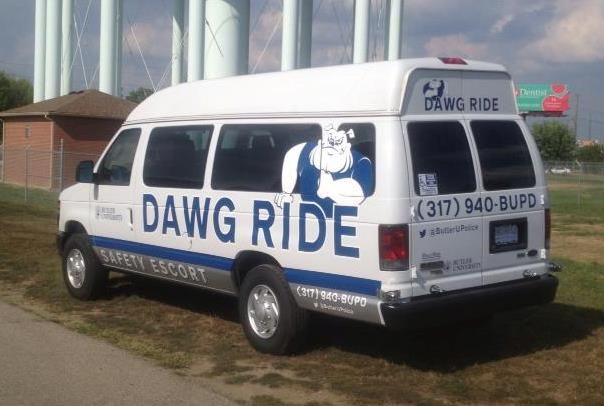 Butler University Police Department, BUPD, received a phone call on the night of Friday, Sept. 3, informing them about a white van that was driving around campus. The University’s Dawg Ride, a safety transportation service for students on campus, uses a white van with Butler graphics on the side and the drivers wear either an ESG or CSC security uniform. The appearance of the van caused confusion amongst some students, even though the identified white van did not have Dawg Ride decals.

Madelin Lapp, junior business entrepreneurship and innovation major, said she received a message from someone in her sorority warning everyone about a suspicious van asking students if they needed a ride.

Chief of public safety, John Conley, said BUPD has not been able to confirm whether the driver of the van said anything to any students on campus. Conley did confirm that there is no evidence any students got in the unmarked van.

Junior journalism major, Holden Hartle, said he saw the white van driving from Fairview House in the direction of Hinkle Fieldhouse on his way back to his room in University Terrace. Hartle said the thought of a suspicious van circling campus terrified him.

“I consider the hypothetical of like you’re a freshman girl who’s just moved to Butler from out of state,” Hartle said. “You don’t know anyone, you’ve just made friends, it’s the first week on campus. You had overheard someone like ‘Oh yeah, use Dawg Ride, it’s a great thing,’ and then this van just shows up and says ‘Do you need to go anywhere?’ That’s horrifying to me and the fact that our police department didn’t feel the same way.”

Conley said BUPD received a call from somebody wanting to report the van. The caller told BUPD where the van was located and what it looked like. Conley said officers then dispatched to the area and found a van parked on Blue Ridge Road near campus.

Officers also found an unmarked van near Atherton Union which they said belonged to a cafeteria service worker. Conley said after locating the two unmarked vans, the officers determined the campus was not in any danger at that point.

Hartle said he believes the student body should have been informed about the unmarked vans driving around campus, especially since some people were already aware and being warned by their friends.

“It does so much more than make me feel uncomfortable or unsafe, like, in my opinion, it’s a disgrace to our safety for BUPD to call themselves a police department, have a situation on campus and then essentially do nothing about it,” Hartle said. “Like in my personal opinion, every single student on this campus should have gotten an email, text message, phone call, some sort of notification that says there is a van driving on campus… it is not Dawg Ride… and instead our police department decided to do nothing.”

Conley said BUPD would have issued a Dawg Alert had the officers believed students were in danger. He said it is sometimes difficult to make sure they are alerting students when there is a danger to campus, but not messaging them so much that students stop paying attention to the information they are sending out.

Conley also said it is important for students to call BUPD when they feel in danger and not go right to social media. He said BUPD received calls on Friday night from people who heard about the van driver on social media, but they did not have any information or logistics to share with the officers.

Students can call BUPD at 317-940-9999 to report any concerns or suspicious activity.